Published in Echoes by Two Writers in Lahore in August 1884. Subtitled (Heine) Listed in ORG as No 106.

A desolate, lonely, even tragic, little piece. As the poet, pen in hand, gazes into the rain and mist, there is no inspiration. He hears voices, calling of love, but he is speechless. The last line, ‘And … this is the end of my lay.’ breaks the mood, suggesting that this is playful invention. However, Andrew Rutherford (p. 121) notes that there is a manuscript version in Kipling’s hand (in Notebook 1 at the University of Sussex) dated March 1882, while Kipling was still at school, with the last line reading: ‘And there’s only a lie to say.’

Kipling left United Services College in July 1882, where he had read widely and written copiously, determined to become a published poet. In October, at the age of sixteen, he became Assistant Editor of the Civil and Military Gazette in Lahore. where he was plunged into the daily grind of newspaper production, in a strange land, with a fearfully demanding climate, and a heavy workload. During 1883 there were periods when he was left alone to manage the paper.

He was sustained by his home life with his parents, though there were times when they were away, and – from December of that year – by a happy partnership with his young sister ‘Trix’ with whom he played word games and other literary inventions, and wrote parodies. Several of these were published in Echoes by Two Writers. However, as Harry Ricketts (pp. 63/4) points out, not all the poems in the collection were new:

Although not immediately obvious, nearly half of Rud’s contributions to Echoes were not new. Of the thirty-one poems in the volume that were almost certainly his, fourteen or so had been written the previous year or had been culled from his old notebooks. A few of these had always been intended as parodies, but many had not. ‘Commonplaces’ and ‘His Consolation’, both written at school, started out as serious poems – the first in the manner of Heine, the second of Browning. Comments in his notebooks show that Rud was already aware how derivative several of these early pieces were; now he realised that he could pass them off as playful imitations….

Other poems contained a heavily disguised biographical underlayer. Echoes not only allowed Rud to recycle older work as intentionally parodic, but provided him with a ready-made mask for his private emotions. 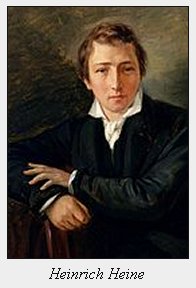 Heinrich Heine (1797-1856) was a German lyric poet, many of whose poems were set to music as lieder. He was also an essayist, whose radical views led to many of his works being banned in Germany. Apart from the attribution of this poem, which could readily be set to music, there is little evidence that he was a significant influence on Kipling.

It is hard to resist the conclusion that “Commonplaces”, with its original final line, reflects the unhappiness that the young Kipling often felt, about his desolate time at Southsea, at his unrequited love for Florence Garrard, and at his fear of failure. In Echoes it is a serious poem masquerading as a parody.