Ann Weygandt notes that this poem is a direct echo of a mediaeval carol, “Joys Seven”:

“Our Lord who did the Ox command” sings perfectly to “The first good joy that Mary had,” and the repetition in the fourth and fifth lines, followed by “good sirs” exactly corresponds to the similar catching up of the fourth line, and concluding “good Lord,” of his version of the original.” Nor does he seem to have contented himself with borrowing from one source; the opening of stanza four comes from the “Wassail Song.” This is the only instance in which we can assert with confidence that he is indebted to a specific carol for metre or words.

We have set out the third stanza of “Joys Seven” below, so that readers can compare them with Kipling’s text:

J M S Tompkins (pp. 83-84) discusses the linking of this poem to two very different tales; first she refers to “The Tree of Justice” in Rewards and Fairies

The dominant image of the tree of justice appears first as a reinforcement of the conception of Norman rule. Sir Richard finds the keeper’s victims nailed to a beech, and says that in his time that sort of tree bore heavier fruit. The threat of the gallows hangs over the countryside during the King’s sport. When Harold is exposed in the King’s court, he too is nailed to the tree of justice, though he is not judged. Nails and the tree bring in, by more than a verbal association, the thought of crucifixion, and suggest the long crucifixion of Harold’s sufferings. A tree appears again in the carol that closes the book. In the iron time of frost, sing the carollers: 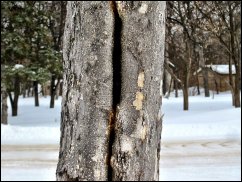 This `Carol’ first appeared in 1900, together with a tale of the
Boer War, “A Burgher of the Free State”. We can go back five
years more and find in `Leaves from a Winter Note-Book’,
afterwards gathered into From Tideway to Tideway, a note of how Kipling first heard this awesome sound, during winter in Vermont.

At night a tree’s heart will break in him with a groan’, he writes. `According to the books, the frost has split something, but it is a
fearful sound, this grunt as of a man stunned.’ [Letters of Travel, p. 114 line 17]

The memory had drawn to itself a symbolic connotation by the time he linked the Carol to the tale of old Allen, the Scot who was a naturalized
Burgher of the Orange Free State, and it was deepened when he
used it for Harold. One must not press too far the application of the verses that accompany the tales: they have their own life. The tree of the `Carol’, for instance, is not the tree of justice; it is
one on which judgment has passed. But it may be said of both
Allen and Harold, men at the end of their lives, that their `wood
(was) crazed and little worth’, and it may be said in both cases
that the `frost’ that broke their hearts was ripening their lands for spring.

‘And who shall judge the Lord?’ cry the carollers. We
cannot judge men for what they do under duress; nor can we
judge the Lord for imposing the duress by which such actions are
enforced. It is a dark lesson for the children. In `Simple Simon’
they had heard a remote echo of it; now it confronts them. Allen
shows his loyalty to the country of his adoption in a way that
many will take for cowardice and treachery. Drake hanged his friend. Harold loaded his soul with guilt, as he believed. A house, De Aquila says, cannot be built all of straight sticks; and a house
must be built.

Our Lord Who did the Ox command
To kneel to Judah’s King, This must refer to the birth of Jesus in a manger in Bethlehem. In Christian interpretations of Jewish prophecy Jesus was to be the King of the Jews, ‘Judah’s King’. 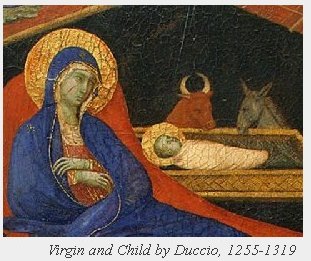 There is an ancient Christian tradition that at the birth of Jesus an ox and an ass bowed down to him in the stable. This is not recorded in the New Testament accounts, but was clearly a belief among the early Christians.

The ox, the ass, and the infant Jesus are to be seen in one of the earliest depictions of the nativity on a Roman sarcophagus of the fourth century, and in later paintings of the Nativity.

The ‘Pseudo-Matthew Gospel’ of the eighth century recounts:

There is a very old tradition that if you go into the stables or barns at midnight on Christmas Eve, all the farm animals will be kneeling down in homage to the birth of Jesus. Kipling echoes this in his poem “Eddi’s Service” linked to “The Conversion of St Wilfrid” in Rewards and Fairies (1910). as does Thomas Hardy, in “The Oxen”:

Christmas Eve, and twelve of the clock.
“Now they are all on their knees,”
An elder said as we sat in a flock
By the embers in hearthside ease.

We pictured the meek mild creatures where
They dwelt in their strawy pen,
Nor did it occur to one of us there
To doubt they were kneeling then.

So fair a fancy few would weave
In these years! Yet, I feel,
If someone said on Christmas Eve,
“Come; see the oxen kneel

“In the lonely barton by yonder coomb
Our childhood used to know,”
I should go with him in the gloom,
Hoping it might be so.

As Wikipedia notes, considerable symbolism is attached to the ox and the ass. The ox traditionally represents patience, the nation of Israel, and Old
Testament sacrificial worship, while the ass represents humility,
readiness to serve, and the Gentiles. One can see some of these qualities in Allen, Kipling’s master-printer in “A Burgher of the Free State”, doing his duty amidst the fears and moral confusions of war.

Daniel Hadas adds: as the quote from the pseudo-Matthew indicates, the source of the association of the ox and ass with the Nativity is Isaiah 1.3:

The ox knoweth hi s owner, and the ass his master’s crib: but Israel doth not know, my people doth not consider.

The pseudo-Matthew reference to Habakkuk is specifically to Habakkuk 3.2, although the “two animals” are not found in the King James Version, because they are not in the Hebrew text. The animals are in the Greek Septuagint text, from which they made their way into Latin texts of the Old Testament that were translated from the Septuagint, before St Jerome produced a new translation (the so-called “Vulgate”), made directly from the Hebrew. But I suspect Kipling was thinking only of Isaiah and the associated iconography. [D.H.]

When we poor fenners skate the ice The marshes of Lincolnshire and Cambridgeshire in Eastern England are called ‘the fens’; they tend to be flooded in wet winters. Kipling used fenners in the original version of the poem, but changed this to fenmen for Rewards and Fairies and later collections.

shiver on the wold wold is an old English word meaning ‘open uncultivated country’, heathland. [O.E.D.] Here it simply means ‘out in the open’.

craized Cracked, an old spelling, used in A Burgher of the Free State; changed to ‘crazed’ for Rewards and Fairies.

With marish all abroad marish is an old English word for marshland, as in line 6 in A Burgher of the Free State (1900). The line was changed to ‘When people walk abroad’ for Rewards and Fairies (1910), and early editions of Songs from Books (1913), and to ‘When Christians walk abroad’ for Inclusive Verse (1919), and later verse collections. See Pinney pp. 685-6.

guard the fens from pyrat folk Before the Norman Conquest in the eleventh century the Lincolnshire fens were vulnerable to raiding Saxon or Viking pirates from across the North Sea. Changed to ‘pirate folk’ for Rewards and Fairies.