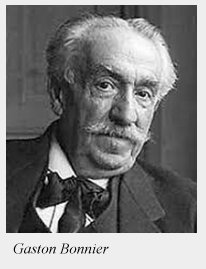 The only known version is in Kipling’s handwriting on the flyleaf opposite the title page of his copy of Les noms des fleurs, by Gaston Bonnier, published in Paris in around 1910. Thomas Pinney notes in 2013 (p. 2295) that this copy had been at Bateman’s but was not to be found, and that his transcription, which we have used, is taken from a very faint Xerox copy (KP 24/11 in the University of Sussex Special Collections), hence various uncertainties in the text.

We have taken the liberty of making a change in Pinney’s text, substituting ‘Poppies’ for ‘Pop’ in line 2.

In his motoring Diary for May 18th 1923 Kipling refers to ‘playing a little over my Botanic nonsense – the Culpepper Pastiche’, when he and Carrie were at Dijon on their way up from the south of France.

We believe that this ‘Culpepper Pastiche’ resulted in this poem. See an article written by Dr. Gillian Sheehan on “Kipling and Gardening”, which appeared in KJ 264 for December 1992. She writes: 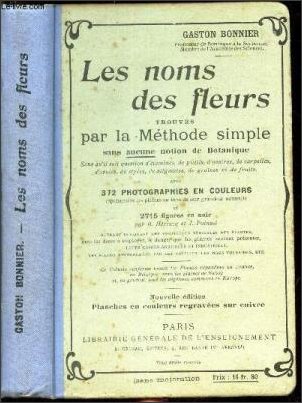 Kipling had found a little booklet on the names of flowers, written in French by Gaston Bonnier (1853-1922) who had been Professor of Botany at the Sorbonne. Kipling must have enjoyed it, for he wrote on the back cover forty lines of verse —never published – beginning, “The Buttercup and the Berberis . . .”, and running pleasantly on through nearly a hundred plant names.

There is some uncertainty over the date it was written, in that Gillian Sheehan associates the writing of the poem with the Carrington version of Carrie’s diaries, dated 6 April 1923, whereas Pinney says that the copy of Les Noms des Fleurs reproduces a date on the flyleaf Monte Carlo / Ap. 26 and he therefore gives a tentative date of 1926 for the poem’s writing.

Although the Kiplings were in Toulon when Carrie’s 1923 entry was made, they stayed at Monte Carlo in both 1923 and 1926. From the later reference to the ‘Culpepper Pastiche’ in the 1923 entry for their overnight stay at Dijon, we wonder whether the photocopy date was not clear-cut (Pinney says it was faint in places), and suspect the poem at least had its inception in 1923. It may be, of course, that Ap. 26 refers to the 26th of April rather than April 1926. 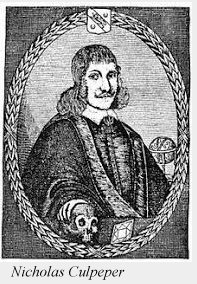 Kipling was particularly fond of gardening, and of wild flowers. See also the rest of Dr Sheehan’s article in KJ264, and George Engle’s notes on “A Doctor of Medicine”, in which the great 17th Century herbalist Nicholas Culpeper (left) is the central figure.

Also Alastair Wilson’s notes on “Leaves from a Winter Notebook” in which Kipling expresses his pleasure in the wild flowers of New England, with names like Solomon’s Seal, Dutchman’s Breeches, and Quaker-Ladies, during his time in Vermont in the 1890s. He was a connoisseur of strange names with roots in the past.