Kipling visited Benares (now called Varanasi) during his journey in January / February 1888 from Allahabad to Calcutta. His reports from this journey were eventually collected in From Sea to Sea where “The Bride’s Progress” was included in The Smith Administration although on a timeline it actually preceded In an Opium Factory.

A newly wedded Bride and her Bridegroom visit Benares on their honeymoon, travelling round the world from England via India, Australia, China, and the U.S.A. The Bridegroom is rather more interested in the sights, sounds and stenches of Benares than is the Bride who remarks after her too close inspection during a guided tour of the city:‘Oh! You horrid people! Shouldn’t I like to wash you.’ Later she recovers her equanimity on realising that India was to be ‘only an incident’ in their travels.

There are not many commentators who have noticed this tale but Angus Wilson regrets that Kipling did not include it in one of his major collections of short stories. He notes (p. 93) that:

…it is one of Kipling’s most telling blows at a group of people he detested for their insufficient concern for India – the globe-trotters or tourists as we should say now. There was something fundamentally disagreeable to Kipling in the idea of people “touring” India. India must be your whole life or nothing. Later, the possible application of it to himself worried him in 1889 when he himself toured other Asian lands.

Charles Allen reprinted the story in his Kipling’s Kingdom (1987) and introduced it thus:

In “The Bride’s Progress” a pair of newly-weds – of the despised species that Kipling always refers to as ‘globe-trotters’ – tour the Hindu holy city of Benares. Like most Punjab men, Kipling found the manifestations of Hinduism much less easy to tolerate than those of Islam – but he could still satirise the prejudices of the English bride, unable to see further than the city’s horrors.

More recently in his Kipling Sahib (2007), he has strengthened his opinion that:

Kipling’s writing of this period is suffused with anti-Hindu rhetoric; the sentiments expressed in “The Bride’s Progress” are too heartfelt to be anything other than a true reflection of his views.

[Epigraph] Five lines from The Burden of Nineveh by Dante Gabriel Rossetti (1828-1882), English poet and painter.

[Page 407, line 17] Benares now Varanasi, India, Holy City of the Hindus and Buddhists. It is situated on the even holier River Ganges.

[Page 407, line 21] Anglo-Indian at this time this expression meant a British person serving or working in India. It now refers to people of ‘mixed’ Indian and European parentage, then known as Eurasians.

[Page 408, line 12] Buddhists Buddhism is based on the teachings attributed to Siddhartha Gautama, commonly known as “The Buddha” (the Awakened One), who lived in the northeastern region of the Indian subcontinent more than 400 years before the Christian era. Buddhists recognize him as an awakened teacher who shared his insights to help people end their suffering by understanding the true nature of worldly phenomena, thereby escaping the cycle of suffering and rebirth. Kim’s Lama was a Buddhist monk.

Hindus the most widely espoused religion of the Indian sub-continent, the second one being Islam. See the notes on “The Bridge-Builders”.

Durga of the Thousand Names she is the wife of Shiva (Siva) the third god of the great Hindu triad—the other two being Brahma and Vishnu.

[Page 409, line 16] Hanuman the Monkey God of the Hindus, who is credited with the construction of the causeway between India and Ceylon.

[Page 409, lines 29 & 30] burning-ghât a section of the stepped embankment to the River Ganges designated for use in the Hindu cremation rites.

Gunga another name for the River Ganges.

[Page 412, line 28] the pure white hem of her petticoat even
walking-skirts nearly touched the ground in those days. 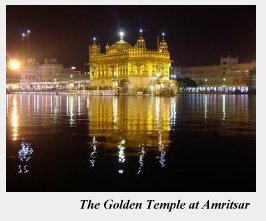 [Page 413, line 2] Golden Temple when one hears this name the great Sikh shrine at Amritsar comes to mind but there is also a Golden Temple in Benares. The Kashi Vishwanath temple (right)on the west bank of the Ganges is dedicated to Shiva, and is considered to be one of the holiest temples in India by Hindus.

Hazaribagh a district and town about 125 miles southeast of Varanasi (Benares). 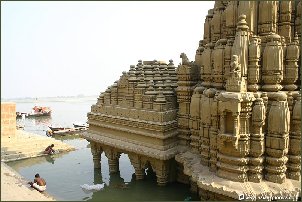 [Page 413, line 29] Scindia’s Ghât (right) was built in 1830 by Baija Bai, a queen of the royal family of Gwalior, after the death of her husband, Daulat Rao Scindia. It was built so huge that it collapsed soon afterwards. What remains is now dilapidated, but it still retains a hint of its original grandeur and picturesqueness. This ghât has no connection to the previous story in this collection.

ghât it should be pointed out that the majority of ghâts are sites for bathing as part of the Hindu purification rituals. The burning ghâts used for cremation are in the minority. A description of the many and various ghâts in the holy city can be found at: this Varanasi web-site.

[Page 414, line 1] Mirzapur a town on the Ganges between Allahabad and Varanasi.

[Page 414, line 14] Vishnu the second of the three chief Hindu gods;but in fact the muezzin calling the faithful to prayer was a Muslim. 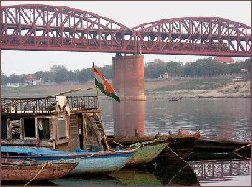 [Page 416, line 11] Dufferin Bridge the railway bridge over the Ganges at Benares, overlooking the burning ghats, opened by Lord Dufferin – the Viceroy – in 1887, and called since 1948 The Malviya Bridge. See also the headnote to “The Bridge Builders”.