This Almanac was first published by Heinemann in London for Christmas 1897, and by Russell in New York in 1898. It was produced in a number of different editions. See David Alan Richards (pp. 102-4) for details.

Although both the English and American editions were first published in late 1897, the included calendar was for 1898 and subsequent editions had a calendar appropriate for the year following publication. Only the month is printed on the same page as the picture. Each month’s verse is printed on the reverse of the picture of the preceding month, so that it is opposite its own picture when the book is open.

Kipling’s verses were collected under the title “Verses on Games” in:

The title page of the London editions carried a trademark for Heinemann (above) sketched by Nicholson from the windmill at Rottingdean, where Kipling was then living. The volume was headed by a somewhat sardonic verse from Kipling:

Here is a horse to tame—
Here is a gun to handle—
God knows you can enter the game
If you’ll only pay for the same
And the price of the game is a candle—
One single flickering candle.

There is also an endpiece in similar vein:

Now we must come away.
What are you out of pocket?
‘Sorry to spoil your play
But somebody says we must pay,
And the candle’s down to the socket-
Its horrible tallowy socket.

Kipling did not share the traditional English passion for sports, though he might have made an exception for polo in India; see “The Maltese Cat” (1895). He once caught a salmon in Oregon in 1889 (see Letter XXVII of From Sea to Sea) and a cow in Sussex in 1890, and later in the nineties enjoyed fishing on estates near his father’s house in Wiltshire. But he was not a very serious fisherman.

At United Services College his poor eyesight kept him out of organised games, while ‘Stalky & Co.’ expressed scornful detachment towards house matches, to the despair of their house-master. They were known to have knocked a golf ball around the ‘Burrows’ (see “Scylla and Charybdis”), though they preferred duels with saloon pistols (see “The Satisfaction of a Gentleman”). And in “The Islanders” (1902) he was to write savagely of ‘the flannelled fools at the wicket’ and ‘the muddied oafs at the goals.’

As Andrew Lycett explains (pp. 308-9), this project arose through Kipling’s encounter with the artist: 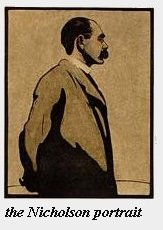 Rudyard’s involvement had come about through his sitting for a portrait for the New Review. Henley had sent the ambitious young William Nicholson to make a woodcut in situ in Rottingdean.

At the same time, the artist was working on the Almanac, a separate book commission for Heinemann, who owned the New Review. Seeing Nicholson at work, Rudyard offered to write accompanying verses, adopting a pithy, knowing style that looked back to Departmental Ditties.
Where Nicholson illustrated the month of August with a woodcut on Coaching, Rudyard suggested: 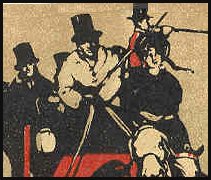 Youth on the box and Liquor in the boot,
My Lord drives out with My Lord’s prostitute.

When Heinemann deemed this not suitable for the family audience he
had in mind, Rudyard reassembled his thoughts.

As David Richards reports, on Nicholson’s death in 1949 his estate included a proof of the coloured woodcut on “Coaching” with the artist’s note:

Kipling’s lines composed at Rottingdean as he sat on a black box in the corner of my lodgings while I was drawing him.

This was the original more racy version of “Coaching”.