The information that Haileybury (Haileybury and Imperial Service College, in Hertfordshire), who have the original manuscripts of the Stalky stories in their archives, had amongst them an unpublished and unfinished story, has been known for some twenty years. Recently the manuscripts, including the unfinished one, “Scylla and Charybdis”, became more accessible, and thanks to the kind agreement of both the owners of the ms (Haileybury) and the literary agents (A.P.Watt) to the National Trust, owners of the copyright, we have been able to publish the text of the story in the Kipling Journal (March 2004, No 309), and discuss it fully.

“Scylla and Charybdis” is set in the late 1870s and introduces the three protagonists of the Stalky stories, Corkran (later nicknamed ‘Stalky’), M‘Turk (called here McTurk, and already nicknamed ‘Turkey’) and ‘Beetle’ (Kipling himself). We meet them as second-formers united against all others in the school – in real life Kipling’s own school, the United Services College at Westward Ho! in north Devon. Reference is made to other boys and one of these, Fairburn, appears in the later stories.

Three twelve year old schoolboys, Corkran, ‘of the dancing eyes’, McTurk, ‘bony and sallow, black haired, black lashed, with a distinct Irish accent’, and Beetle, ‘fat and unhandy … (rubbing)… the wet from his spectacles’, are out for a game of golf on the ‘Burrows’, the waste of sandhills between Westward Ho! and the sea. This is the first appearance of ‘Stalky & Co.’, before Corkran has acquired his nickname of ‘Stalky’, or the three attained the dignity of a study.

The boys are told, very rudely, to get off the links by a red-coated stranger, an army Major, with his caddy, who is known to them, carrying an enormous new golf bag. The Major quickly shows himself to be an incompetent golfer. Hidden under the lip of a bunker, they watch him lose his ball, and cheat by dropping a new one. Soon after, he sees the boys, and boxes Beetle’s ears (or in another version strikes McTurk with his club) but departs hurriedly when they cover him with their catapults and pepper his retreating legs. On their way back to College they are caught by the Major and called to account by the Club Secretary. But when they tell a group of club Members that they have caught the Major playing very badly – and cheating – they are quickly released, scot free.

The writing of the story

The setting, in which the boys have not been at the school very long, makes this appear to be the first in the chronology of the Stalky tales. However this role is also taken by “Stalky”, the story that was first published in December 1898 as part of a series of other Stalky stories in magazine form, but was not collected until Kipling placed it in Land and Sea Tales for Scouts and Guides in 1923. Here too the boys are in the lower-second form. Kipling himself introduces “Stalky” in Land and Sea Tales with the remark that it failed to appear in its logical place for “some reason or other”. In that story rather more detail is given about the boys and the origin of the soubriquet ‘Stalky’.

In July and August of 1898, Carrie Kipling noted in her diary that “Rudyard starts to write the last of the Stalky stories, which, after the Jungle [Book] fashion, was the first”. In August she writes that he “finished the story but rejected it”. This may refer to “Scylla and Charybdis”. (The Jungle reference may be to the Mowgli story “In the Rukh” (published in Many Inventions in 1893), which although written first, in chronology is the last, dealing with Mowgli as a man. The Jungle Book was published in 1894.)

So it seems likely that Kipling was dissatisfied with the way “Scylla and Charybdis” was developing as the opening story, and put it by while writing “Stalky” and the other tales that appeared and were collected at that time. Since items put by were often taken up again later, this may be the origin of the failure to include either of them in Stalky & Co., the original collection, published in 1899.

The setting of the story on the natural golf-links at Westward Ho! is valid for the period, as the mass production of the golf-ball at that time enabled the game to spread across the UK and indeed abroad. Kipling, as usual, introduces well-observed technicalities of the game and its equipment. Much turns on the “cheating” observed by the boys.

Origins of the story

In “An English School” (Oct 1893) Kipling describes the setting of “Scylla and Charybdis”:

The Burrows, lying between the school and the sea, was a waste of bent rush and grass running out into hundreds of acres of fascinating sand-hills called the Bunkers, where a few old people played golf. In the early days of the School there was a small Club-house for golfers close to Pebble-ridge, but, one wild winter night, the sea got up and drove the Pebble-ridge clean through the Club basement, and the walls fell out, and we rejoiced, for even then golfers wore red coats and did not like us to use the links. We played as a matter of course and thought nothing of it.

Now there is a new Club-house, and cars take the old, red, excited men to and from their game and all the great bunkers are known and written about; but we were there first, long before golf became a fashion or a disease, and we turned out one of the earliest champion amateur golfers of all England.

It was natural then for Kipling to consider basing a story on the links and the “old gentleman” in a “red coat”. Red coats and red jumpers were commonly worn at the end of the 19th century to distinguish gentleman-players from others using the “common” links.

Although this account appears in Land and Sea Tales published in 1923, a nearly identical magazine version was published in 1893, and indeed this can be taken as the trigger for writing the fictional Stalky stories in general as much as pointing to the origin of “Scylla and Charybdis”. In his autobiography (Something of Myself), Kipling places the start of writing the Stalky stories as 1896 at Torquay. He had revisited the School in 1894 on the occasion of the retirement of his Head, Cormell Price.

In the later story “The Satisfaction of a Gentleman” (1929), Kipling explains, more clearly perhaps, the antipathy to the red coat: “Certain old men, though not in the Army, impiously wore red coats”. This was a time before the Boer War forced the abandonment of red uniforms in the Army on other than ceremonial occasions. Further bunkers, ‘The Pit’ and ‘The Cockscomb’, are mentioned, and in this later story, the red-coated golfer is re-promoted from Major to Colonel and is on the College Board of Council, a role bringing him into direct contact with the Head. Correspondingly the boys are older, perhaps Lower Fifth, and M‘Turk (not McTurk) has given up his erstwhile golfing enthusiasm: “Turkey had played it for some weeks and pronounced it ‘sickenin’” .

The chronology of the Stalky stories

The genesis of the ‘Stalky’ stories seems to date from 1893, the year when Kipling revisited his old school, and wrote “An English School”, published in the October. At that time, the Kiplings were still living in Vermont but were to leave in August 1896. They stayed in Torquay from September 1896, leaving in May 1897 to settle in June for a few months at North End House in Rottingdean on the Sussex coast, and then until 1902 across the way at ‘The Elms’. This period covers the early Stalky stories, probably including “Scylla and Charybdis”. The later stories (“Regulus”, “The United Idolators”, “The Propagation of Knowledge”, and “The Satisfaction of a Gentleman”) would have been written while the Kipling’s were living at Bateman’s in Burwash, their final home, or during holidays abroad.

The provenance of the manuscript 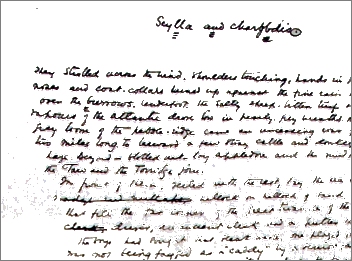 Photographs of the manuscript above and below by Roger Ayers ©

The manuscript of “Scylla and Charybdis” is in a bound volume, 370 mm x 280 mm x 35 mm, one of Rudyard Kipling’s mss given by his widow, Carrie Kipling, probably in 1936 or 1937, to the Trustees of the Imperial Service College. Like other mss given away in his lifetime and after his death, this leather bound volume has pasted into it a number (134) of pages in Kipling’s holograph.

It is inscribed “Caroline Kipling from Rudyard Kipling” in the back of the front cover, in a hand that certainly appears to be Rudyard’s. In these respects, the Haileybury volume is identical to the volume of verse given by Caroline to Magdalene College, Cambridge (identically inscribed) and to the volume of the ms of Rewards and Fairies given by the author to the University of Cambridge Library in 1926. The Haileybury volume is likely therefore to have been prepared in this form in the author’s lifetime, during or after 1926.

Imperial Service College had absorbed Kipling’s own school, the United Services College in 1906, after its move from Westward Ho! and it was to their Trustees, therefore, that the gift was delivered. The ms was highly esteemed and kept by the College at its bankers in Windsor.

The Imperial Service College was re-established in Windsor in 1912. Although the First World War took its toll of Old Boys, it was the financial toll of the Second World War that led to the amalgamation with Haileybury College (established 1862). All three schools had much in common, not least that Cormell Price, Kipling’s Head, was a Haileybury man. Formally, this was not a take-over. The full official title is ‘Haileybury and Imperial Service College’. (Haileybury does not call itself ‘Haileybury College’ in deference to the juncture with Imperial).