The tale was then reprinted in the Fishing Gazette of 12 May 1951, with the original illustrations by R. L. Marston. ORG (page 2479) reprints a letter to The Times of 25 July 1958 from the Editor of the Fishing Gazette, P. Marston, and the then Kipling Journal Editor, Roger Lancelyn Green, in the issue of 25 July 1958. Green refers to an unsigned article in the issue of 7 July entitled “The Cow and the Flaming Onion” (reprinted in ORG page 2480) concerning an angler who hooked a cow as he was casting, recovered the fly (the ‘Flaming Onion’) with the assistance of his wife who had doubts as to his sanity during his first attempts to do so, only to lose it on a snag in the river at his next attempt. Marston writes to record the publication of Kipling’s item in his issue of 12 May 1951.

[Title] a humorous variation on ‘Dry-Fly Fishing’ where the lure — an artificial fly which contains a hook and resembles the food of the type of fish to be caught — is floated gently on top of the water with a line that floats so the fish can be seen to rise to it.

Columbia River the largest river in the Pacific north-west region of North America, stretching from British Columbia through the U.S. state of Washington before emptying into the Pacific Ocean. Kipling caught his first trout in this river,
(Charles Carrington, page 127).

creel a basket carried by a fisherman to hold his catch 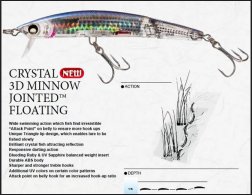 triangles this (right) is a modern version. courtesy of Harry Waterson. . Clearly dangerous to the unwary.

jack in this context the young of the pike – a large voracious fresh-water fish, family Esocidia.

bleak-pool the common bleak is a small fish of the Cyprinid family.

chloride of lime A powder containing calcium chloride and calcium hypochlorite, used in solution as a bleach – it would kill any fish that ingested it.

withers the ridge between the shoulder-bones of a horse

gadflies blood-sucking flies (Tabanus) that irritate cattle by laying eggs under the skin.

struck lifted the tip of the rod sharply to bed the hook into the mouth of the fish.

anchor-fluke the pointed end of the arm of the anchor that digs into the sea-bed.

coral moorings anchoring in coral would not be good holding-ground.

pollards in this context trees with their crowns cut off, and producing new shoots

Phaeton a son of Helios, the Sun, who drove the chariot of the sun bur failed to control it and was killed to prevent further disaster. It is also the name of an elegant carriage.

Green grow the Rushes Oh ! title of a poem by Robert Burns (1759-1796), and also a traditional song first recorded in Hebrew in the 16th century and probably much older than that.

Solomon and Job Solomon was the great King of Israel, who by tradition was much plagued by his thousand wives; see The Butterfly that Stamped” (Just-So Stories).
Job another Old Testament figure, who was much afflicted by sore trials, as recounted in the Book of Job.

Orion a great hunter in Greek mythology who gave his name to a group of stars in the heavens.

Behemoth the gigantic beast described in
Job 40,15-24, probably the hippopotamus. (Brewer’s Dictionary of Phrase and Fable).

No motion has she now, no force;
She neither hears nor sees;
Rolled round in earth’s diurnal course,
With rocks, and stones, and trees…

Here We Go Round the Mulberry Bush the well-known English nursery rhyme:

As I was going up Pippin Hill,
Pippin Hill was dirty;
There I met a sweet pretty lass,
And she dropped me a curtsey…

Hey Diddle Diddle Another English nursery rhyme. in which the cow is the centre of attention. The earliest version dates to 1765: the phrase “high diddle diddle” dates back to Elizabethan times and is found in Shakespeare:

Hey diddle diddle,
The cat and the fiddle,
The cow jumped over the moon.
The little dog laughed to see such fun,
And the dish ran away with the spoon.

skillet A skillet is a type of frying-pan with a long handle. This is an echo of Alice’s Adventures in Wonderland (by Lewis Carroll, 1832-1898), Chapter 6, in which the cook throws a frying-pan at the Duchess, but misses.

Ten Acre fields were often named after their size. An acre is 4840 square yards, some two fifths of a hectare. A ten acre field was thus four hectares.

Marlow Buzz an artificial fly tied from coloured feathers and silk; the fish either take it for a small red and black caterpillar or a round black and red beetle. (Edward Fitzgibbon, A Handbook of Angling, (Longman, Brown, Green & Longmans, 1847, page 126).

gaffed brought the fish ashore with a large hook fixed on the end of a stick.

Smithfield the ancient meat-market in the City of London next to St. Bartholomew’s Hospital, which is still (2009) in operation on that site. It was founded by Rahere, the formidable Court Jester of King Henry I. (see “The Tree of Justice” (Rewards and Fairies), and the poem “Rahere”.