This poem was published in the Pioneer on 15 December 1888, with the subheading:

It was reprinted in the Pioneer Mail, on 19 December. It was unsigned, but is authenticated by being included in Kipling’s Scrapbook 4 of his own press cuttings in the Kipling Papers at the University of Sussex Special Collections. 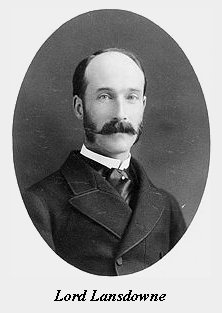 Lord Lansdowne, the new Viceroy, arrived in Calcutta on 8 December 1888. The Pioneer for that day printed what was claimed to be the draft of an Address to be presented to him by the Calcutta Municipality, pleading for “a moderate and timely concession” in the sphere of government, for the “unofficialising of the administration” in enlightened centres like Calcutta, and for the“granting of a larger voice to the unofficial community.” [This was, in effect, the business community, partly European and partly Indian.]

On 13 December the Pioneer printed the final text of the Address, which was delivered that day. Respectful in tone and less political in emphasis than the draft, it none the less alluded to “the reasonable aspirations of the non-official community both European and native”, and hoped for the passing of such measures as would “harmoniously broaden the foundations on which rests the undoubted loyalty of the people of India to the Throne of our most Gracious and beloved Queen-Empress”.

The poem is spoken by the Calcutta Municipality, the local government of the city, claiming to be the elite of Bengal, and with their experience they intend to teach the Viceroy how to rule, and will point out his mistakes. The General Chorus and Encore Verse suggest hopefully that when they’ve done that, they might actually start to manage the matters that they are meant to look after, which include sanitation, drainage, road maintenance, rubbish collection and public health.

It expresses Kipling’s scepticism about the aspirations of Indians for a greater share in government decisions, his awareness of the filthy state of the streets of Calcutta, India’s capital city, and has – perhaps – more than a touch of
traditional reservations in the Punjab and Central Provinces about Bengal and Bengalis. In March 1888, in his early days as a reporter for The Pioneer he had explored Calcutta, and formed a very unfavourable impression of that city. See in particular “With the Calcutta police”.

Bow Bazaar an area of Calcutta.

Hugli western channel of River Ganges, linking Calcutta to the Bay of Bengal.

Kinchinjunga third-highest mountain in the world (8598 metres), on the border between India and Nepal.

Holy Gunga The River Ganges, sacred to Hindus, which reaches the sea at Calcutta.

Ooltadunga an area of Calcutta.

busti As Hobson-Jobson explains, one of the ‘separate groups of huts in the humbler native quarters of Calcutta, the sanitary state of which has often been held up to reprobation’. The Municipality was in charge of sanitation.

the quite-played-out Caucasian Bret Harte (1839-1902) asks ‘is the Caucasian played out?’ in his poem “Further Language from Truthful James”.

Aspinal The inventor of a type of enamel paint.

Peshawar The strategically important city on the North-West Frontier, on the route to Afghanistan.

Coromandel The south-east coast of India.

kintal Perhaps a cesspool. Rutherford did not succeed in finding a translation of this term. Comments from readers will be appreciated.

Eatanswill What historians would call a very ‘rotten’ borough, a place where parliamentary representation was in the hands of a very small number of electors, easily bribed, as was common in England before the Great Reform Act of 1832. An election there is described in chapter XIII of The Pickwick Papers by Charles Dickens in 1836. Pott and Slurk were the editors of the two rival political papers in Eatanswill.