[Verse heading] The two lines of verse are from “The City of Dreadful Night” by James Thomson (1834-82).

[Page 237, line 8] Dum-Dum is about 6 miles northeast of central Calcutta.

Barrackpore is about 12 miles north (upstream) of central Calcutta on the east bank of the Hugli.

[Page 237, line 16] Sealdah or Sialdiah, is an area just inside the Circular Canal due east of central Calcutta at the end of Bow Bazar Street. There is a railway station there for the Eastern Bengal State Railway.

[Page 240, line 7] Serampore the old Danish settlement on the West Bank of the Hugli, almost opposite Barrackpore. (ORG)

[Page 241, line 13] Bamun Bustee lies in the southeast corner of central Calcutta, in the general area of Park Street, east of the Maidan. 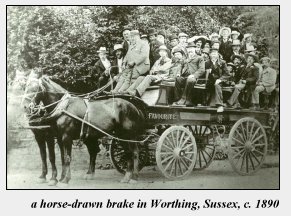 [Page 241, line 28] brake an open flat-bed cart usually drawn by two horses. It could be fitted with bench seats for passengers.