Although in the same general vein as “The Letter from Golam Singh”, this letter purports to be from a Pathan elder, Yakub Khan, to his son. Yakub Khan is being taken as part of a group of tribal leaders on a guided tour organised by the British in northern India, mainly to impress them with Britain’s military might. He describes his journey of approximately 1,500 miles in a generally south-easterly direction from the Khaibar (Khyber) area to Calcutta. He is greatly impressed by the weight of the British military presence, and tells his son that their Mullahs had lied in saying that the English were weak and encouraging the Pathans to pursue their tribal feuds.

The tendency of Mullahs to stir up tribesmen against British authority is echoed in “The Head of the District” (collected in Life’s Handicap) which was first published two years after this article. The Mullah in that story came to a bad end, and it seems likely from this letter that a similar fate may well befall the Mullah of Tordurra.

There is a significant amount of ethnographic detail relating to the Afridi tribes who live in the Tirah across the border to the west of Peshawar – also to their interactions with other tribes in the region. An excellent description of the Tirah can be found in the
Classic Encyclopedia. 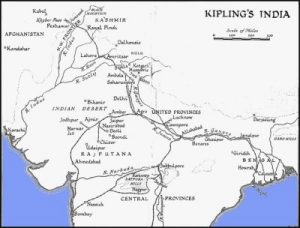 Readers who are unfamiliar with the geography of the northern part of the subcontinent, including Afghanistan, should find our Map of Kipling’s India helpful.

For further detail, readers will find the following detailed maps of 1893 useful. Rather than identifying the location of all the larger towns and cities mentioned in passing in the story it is left to the reader to find them on the maps. However, attempts have been made to identify and locate all the minor places relevant to the activities of the tribesmen.

These maps are from Constable’s Hand Atlas of India of 1893 to be found at the websites listed below.

It should be remembered that the North-West Frontier Province, which now includes much of the area around Peshawar, was not created until 1901 after the Tirah Campaign of 1897-8.

Kipling had visited the North West Frontier area including Peshawar, Jamrud, and Rawal Pindi in March and April 1885 as a special correspondent for the Civil and Military Gazette. He filed a series of reports about the meeting of Lord Dufferin, Viceroy of India, and the Amir of Afghanistan, Abdur Rahman, the durbar eventually taking place in Rawalpindi.

Jamrud (or Jumrood) which is at the southern end of the Khyber Pass was the furthest north that Kipling went. (see Pinney (Ed.), Kipling’s India, Uncollected Sketches (pp. 85-90)

[Page 396, line 15] Kuki Khel a subtribe of the Afridi tribe on the frontier of India with Afghanistan on both sides of the Khaiber Pass and of the Kabul River. [ORG]

[Page 396, line 15] Lala China a village between Jamrud and the Khaiber Pass, about 5 miles northwest of Jamrud. It is now in Pakistan. See
Google Earth.

[Page 396, line 16] Vahbtahn Pathan version of Warburton. This is almost certainly a reference to Sir Robert Warburton (1842-1899), the son of Lt-Col Robert Warburton R.A. and an Afghan lady (niece of the Amir Dost Muhammad). He was Political Officer in the Khyber from 1879-1897. (Dictionary of Indian Biography by C.E. Buckland, 1906).

[Page 396, line 19] Pubbi a village on the railway between Peshawar and Attock. During the 19th and early-20th centuries, it had the reputation of being the haunt of ruffians and thieves. For a later mention, see The Lotus and the Wind by John Masters.

[Page 396, line 19] Mahbub Ali Although the names are the same, this is not the Pathan horse-trader who plays such an important part in Kim, but is a writer who is also mentioned in the story published three months later in April 1888, “Dray Wara Yow Dee” (Collected in Soldiers Three and Other Stories).

See the article on “My Quest for Mahbub Ali” in KJ 327, June 2008, pp.10-22 by Omer S.K. Tarin. This suggests that the horse dealer in Kim possibly belonged to the Gilzai Mian clan whereas the writer referred to in this story is an Afridi.

[Page 396, line 23] Kuka Ghoz Not traced, but the text describes its approximate position in the Bara valley as seen from the two notes below.

[Page 396, line 24] Bara This refers to the Bara valley through which the Bara River runs. From Maidan and the Orakzai in Afghanistan, the river flows eastwards across the border, passes just south of Peshawar and joins the Kabul River near Pubbi.

[Page 396, lines 24 & 25] Zuka Khel or Zakha Khel is another Afridi subtribe. They were reputed to be the most wild and lawless of the Afridi clans. (Glossary of the Tribes and Castes of the Punjab and North West Frontier Province by H. A. Rose, Ibbetson, Maclagan, 1990)

[Page 396, line 29] Attock There is a rail junction at Attock with one line trending southwestwards towards Bombay whilst the other branch goes southeastwards in the direction of Delhi and Calcutta.

munajat a prayer or concluding supplication.

[Page 397, line 8] Bonerwals a tribe from Buner, an area between the Swat river and the right bank of the Indus, about 50 miles north of Attock.

[Page 397, line 21] In the matter of six years gone this story was written in 1887 or earlier, so we are being asked to remember the Second Afghan War of 1878-1880 – which included the famous march from Kabul to Kandahar – when presumably the Mullah sent this tribe on a raid into India which must have been a fiasco; alternatively they may have actually joined the Afghan Army against the British Forces. It is not clear which. [ORG]

[Page 397, line 33] Sikanderkhelogarhi possibly Sikandara in the Safed Koh region west of Peshawar, and of the Afridi homelands. See
WorldCityDB.

[Page 398, line 1] Sangu Khel a branch of the Shinwaris in Afghanistan, west of the Khaiber between Jalalabad and Landi Kotal. This includes the Safed Koh region.

[Page 398, line 22] Phillour on the Sutlej River about 50 miles east of its junction with the Beas River. [ORG]

[Page 399, line 19] Pathan an alternative name for the Pashtun, Pushtun, Pakhtun or Pukhtun peoples. They have their own Pashtunwali Code of Honour which guides both individual and public conduct, some of the results of which are described in the story.

[Page 400, line 15] Kafiristan the area north of the Kabul River and between the Panjshir and Kunar Rivers. See
the 1893 map on this web-site.

[Page 401, line 16] Kadam a village two miles south-west of Jamrud. which is on the road between Peshawar and the Khaiber Pass.

[Page 402, line 22] white stockings, etc this is the way the Babu (clerk) dressed in cities such as Calcutta. [ORG]

[Page 402, line 31] Cherat is located 34 miles south east of Peshawar at an elevation of 4500ft on the west of the Khattak range, which divides the Peshawar from the Kohat district.

[Page 403, line 21] Khuttick now spelt Khattak. Belongs to the Baizai tribe of Pathans, who live east of Kohat and Peshawar and south of the Swat River. [ORG]

[Page 403, line 28] Kabir an Indian mystic and poet, who lived at Benares in the 16th century. He taught a monotheistic religion designed to reconcile Hindus and Moslems. [ORG]