This poem (see ORG vol. 8 (V.I.) page 5171, verse No. 260) was first published in the Civil and Military Gazette over Kipling’s signature, on 4 May 1887. It has had various titles over the years: “Jubilee Ode” (Queen Victoria), “June 21st 1887”, “Punjab Peasants’ Points of View”, “And the Ploughman Settled the Share”, “In a Good Season”, “Corn and the Cattle” “By the Well where the Buffaloes Go”. Four lines are given in Lockwood Kipling’s Beast and Man in India.

[There is also a different uncollected item (listed by ORG as Verse No. 273 p. 5181) entitled “Jubilee Ode” over the signature of “Balbus”. ORG notes it as ‘probably published on June 10th 1887’, and refers to it as ‘An Indian adaptation’. The opening lines run:

The present Editors are rather sceptical about Kipling’s authorship of this piece. 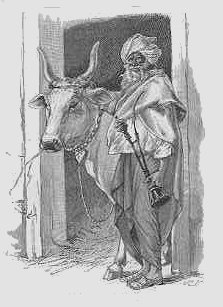 In 1887, the United Kingdom and the British Empire celebrated the Golden Jubilee (50th anniversary) of Queen Victoria’s accession to the throne with a banquet, to which fifty European kings and princes were invited. Celebrations were held all over the world.

However, the Indian ploughman is not impressed. He knows of the Queen but considers how those who have ruled India over the years have come and gone. His purpose in life is still to provide food for the people and he has no time for, or interest in, anything else. This sentiment is also reflected in the last two lines of “The Masque of Plenty” (1888).

His life is a long-drawn question
Between a crop and a crop. 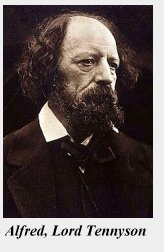 In the United Kingdom the composition of poetry to celebrate national events is the role of the ‘Poet Laureate’, a sort of national bard, appointrf by the Crown. laureate means ‘crowned with a laurel wreath’, a mark of distinction in Roman times. The appointment still exists, though in the 21st Century it is viewed with rather less solemnity.

In 1887 the Laureate was the venerable Alfred, Lord Tennyson (1809-1892.) who was appointed by Queen Victoria in 1850 and composed “Carmen Sæculare,” eleven unrhymed verses in honour of her Jubilee; the title is borrowed from Horace. (See our notes on “Carmen Circulare” in The Muse Among the Motors and “The Last of the Light Brigade”.)

Charles Carrington (p. 259) discusses the question of who was to be appointed when Tennyson died, showing how Kipling’s “The Last Rhyme of True Thomas” (1894) conveyed the message that he was not interested in official recognition. Alfred Austin (1835-1913) was appointed in 1896.

Kipling turned down the Laureateship at least twice in later years just as he refused a knighthood. He did not wish to be beholden to a government of any political colour and he would not write to order. He obviously remembered the incident of his newspaper’s coverage in 1883 of the Ilbert Bill, a government measure for increasing the role of Indians in the judiciary. The Civil and Military Gazette (sister-paper of the Pioneer) held back criticism of the Bill despite its extreme unpopularity with its readers, and young Kipling, the Assistant Editor, was hissed in the Club. As he noted in Something of Myself (p. 51):

…The demonstration tailed off, but I had seen a great light … I was a hireling, paid to do what I was paid to do – and, I did not relish the idea.

One of the most remarkable was written in response to the numerous public celebrations and events staged to mark Queen Victoria’s Golden Jubilee. Published in the CMG in 1887 and given a metre which matches the plod of the ox at the plough or the wheel over the well “What the People Said” suggests that the Queen-Empress and her Empire meant nothing to the vast bulk of the Indian populace … India’s peasants are concerned only with their crops and the harvest… 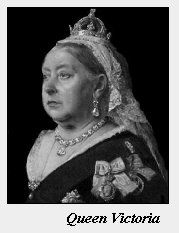 share The part of the plough that cits into the ground to create the furrow as it moves along.

Mahratta The Mahrattas were a Hindu imperial power in India from the late seventeenth to early nineteenth centuries.

Mlech defined by a footnote as ‘the foreigner’.

the fated year a year of yet another conquest. There were several waves of invaders from the north over the centuries who conquered India and were conquered in their turn.

[Verse 3] Great serpents, blazing, of red and blue The fireworks in celebration of the Jubilee. The ploughman does not see any cause for rejoicing.

trimmed the lamps the wicks of oil lamps have to be cut off square so that they burn evenly without smoking.

dearth a scanty supply of food.

Mogul The Empire of the Moguls (or Mughals) was dominant in Northern India (and for a time much of the sub-contiunent) between the seventeenth century and the establishment of British rule in the late eighteenth and early nineteenth centuries.