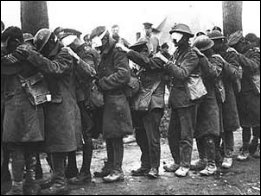 [Page 77 line 6] died of tubercle after gas Men who survived an attack by poison-gas were often left with scar tissue in their lungs, and were susceptible to tuberculosis. (See also Black’s Medical Dictionary page 328, and “Fairy-Kist” page 164 later in this volume)

[Page 78 line 31] blancmange a jelly prepared with milk, a rather insipid dish, familiar to anyone who has attended a boarding-school.

isn’t cricket not the gentlemanly way to behave, here meaning ‘not fair.’

[Page 79 line 19] round-robin a petition or complaint that is signed in a circle so the name of the ringleader is not apparent.

[Page 79 line 20] not half a bad bit of English either He is saying that it was well-written, probably trenchant, vivid, and to the point. However, his praise of it is ‘dead common’ and not, one hopes, a sample of his usual prose! ‘Not half’ is a Cockney expression.

[Page 79 line 21] ‘simple of themselves’ without good ingredients being spoiled by over-elaborate cooking.

[Page 79 line 32] pickets usually a small party of troops patrolling ahead of the main body, but in this case manning a road-block.

[Page 80, line 8] at the rate of knots a pseudo-nautical expression supposed to mean ‘fast’. [During some years at sea I never heard a sailor use it; Ed.]

[Page 80 line 14] Old E. H. W. School There is no such school, but the initials might stand for Eton, Harrow and Winchester, all famous old-established British public schools: see “An English School” (Land and Sea Tales) and the ‘Stalky’ stories.

[Page 80 line 18] Higher Counterjumpery by Transatlantic out of
Top-Hat a play on the desription of a horse’s breeding – name, name of sire, name of dam. A contemptuous term for a male shop-assistant in vogue at the time; the sire is American business methods and the dam Top-Hat. Thus it signifies highly developed selling methods based on American business ruthlessness combined with British style, though in a somewhat ill-bred manner.

[Page 81 line 18] the Eternal Verities a book of instruction in Theosophy – see “The Sending of Dana Da” (Soldiers Three).

[Page 82 line 31] a beak a schoolmaster or a magistrate – in this context, the former.

[Page 83 line 30] Omnes the Latin for ‘all’ – here used as a stage direction meaning ‘all to speak together’.

[Page 85 line 11] ossuary a bone-house, where exhumed skeletons are stored to make room for new burials in the graveyard.

[Page 85 line 17] as the islanders looked at St. Paul they thought he was a murderer when a viper bit him; but he came to no harm and they then thought he was a god. The story of his shipwreck on Malta is told in Acts 27 and 28. See also the Notes to “The Manner of Men” later in this volume.

O Dura illa messorum
Oh Ye rigid guts of reapers!” I translate
For the great benefit of those who know
What indigestion is — that inward fate
Which makes all Styx through one small liver flow.
A peasant’s sweat is worth his lord’s estate:
Let this one toil for bread — that rack for rent,
He who sleeps best may be the most content.

The Styx is one of the rivers of Hades across which Charon ferried the shades of the departed. Kipling suffered from a stomach ulcer for many years, and eventually died of it.

[Page 85 line 27] one learns to lie in the Army quicker even than on the land perhaps a somewhat distorted echo of Kipling’s “Poseidon’s Law” explaining how the Brass-bound Man possesses:

The soul that cannot tell a lie – except upon the land !

[Page 86 line 10] Nineveh was saved An echo of Jonah 4,11: ‘that great city, wherein are more than sixscore thousand persons that cannot discern between their right hand and their left hand.’ [Strictly, ‘sixscore thousand’ is 120,000 rather than the ‘six hundred thousand’ that Christopher Mervyn cited. But he was trying to excuse himself to his irate superior, and in any case Kipling was probably quoting from memory; Ed.]