This poem was first published in Puck of Pook’s Hill in 1906, in association with the story “Dymchurch Flit”, and reprinted in numerous subsequent editions of that collection. (See Richards p. 176).

The poem is also later collected in:

In this poem Kipling expresses his delight in the landscape of Sussex, where he had settled four years before, at Bateman’s near Burwash in the Weald, the well-wooded area below the South Downs. He says he’s in love with ‘The Weald and the Marsh and the Down countree’, and doesn’t know which he loves the most. However, in “The Run of the Downs” which accompanies the story “The Knife and the Naked Chalk” in Rewards and Fairies (1909) he says ‘the Downs are best’.

[Verse 1] The Weald is the lower central part of Sussex north of the Downs, an ancient oak forest, and the site of early iron-works.

The Marsh is Romney Marsh in the east of the county, a strange flat landscape, intersected by ditches. Most of it is in Kent, the neighbouring county. In “Dymchurch Flit” (Puck of Pook’s Hill p. 265) ‘Tom Shoesmith’ tells the children : 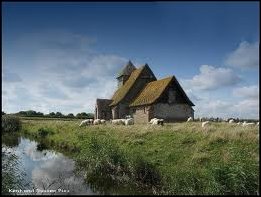 … there’s steeples settin’ beside churches, an’ wise women settin’ beside their doors, an’ the sea settin’ above the land, an’ ducks herdin’ wild in the diks’ (he meant ditches). ‘The Marsh is justabout riddled with diks an’ sluices, an’ tidegates an’ water-lets. You can hear ’em bubblin’ an’ grummelin’ when the tide works in ’em, an’ then you hear the sea rangin’ left and right-handed all up along the Wall…

The Down countree is the South Downs, a range of chalk hills running parallel to the coast. Near Eastbourne, on the white Chalk coast the Downs end in spectacular white cliffs, the Seven Sisters and Beachy Head. 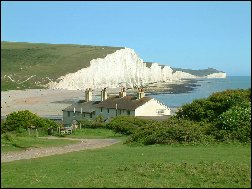 gill a ravine. In his poem “Sussex” Kipling uses the alternative spelling ‘ghyll’:

Brenzett a village in the Marsh.

[Verse 4] Southdown grass the Downs are open grassland, used since time immemorial for grazing sheep. There is a breed of sheep called the Southdown. In “The Knife and the Naked Chalk” (Rewards and Fairies p. 122, Mr Dudeney, the shepherd, tells the children:

‘Now press your face down and smell to the turf. That’s Southdown thyme which makes our Southdown mutton beyond compare, and, my mother told me, ’twill cure anything except broken necks, or hearts. I forget which.’

Firle an’ Ditchling two of the highest points of the Downs. See “The Run of the Downs” in Rewards and Fairies.

sails at sea The Downs extend right to the coast, so that from them you can see the shipping in the English Channel.