ORG Volume 7, page 3334 records this piece as Speech No. 60 and prints the text, including Kipling’s opening words of thanks to the Lord Mayor, which are omitted from The Times report of 28 January 1915, and the version collected in the Sussex edition, from which we have taken Kipling’s text.

Kipling is addressing a meeting at the Mansion House, in the City of London, official residence of the Lord Mayor. The object is to raise money to provide military bands for recently-raised battalions, which explains the reference to a cheque-book at the beginning of the speech. The Times here reported ‘laughter’. (See The New Army in Training, 1915) Several gentlemen then supported the appeal, one of them, Sir Fredrick Bridge, remembered seeing the 18th (Royal Irish) embarking at Rochester for the war in the Crimea in 1857, marching to their ship with the band playing a rousing tune.

[Sir John Frederick Bridge (1844-1924) was an English composer and organist at Westminster Abbey from 1875 to 1918. He composed music for Queen Victoria’s Jubilee and King Edward VII’s coronation, in addition to other works.

The Royal Irish Regiment (also known as the 18th (Royal Irish) Regiment) was until 1881 the 18th regiment of Foot (Infantry) in the British Army. First raised in 1684, this was one of eight Irish regiments raised and garrisoned in Ireland. After serving for two and a half centuries it was disbanded in 1922 with the Partition of Ireland under the Anglo-Irish Treaty.]

Other composers who had or would shortly set Kipling verses to music were also present, including Elgar, German and Parry. In his speech Kipling confesses that he is no musician. However, he obviously appreciated the importance of music in both civilian and military life, as witness “Parade-Song of the Camp Animals” which goes with “Her Majesty’s Servants” in the Jungle Book, in which the various ‘songs’ are written to familiar tunes; also Kipling’s habit of walking about humming a tune while composing verse.

There are some sixty references to music in the Kipling Journal, mainly concerning musical settings of Kipling’s verse. See Brian Mattinson’s “Kipling and Music” and his list of over 800 different settings.

See also Brian Mattinson’s articles in KJ 307/49 and 308/33. Others include KJ 122/13 “Kipling’s Quoted Music” by T. E. Elwell, which discusses musical items mentioned in his writings. Also KJ 178/05 “Rudyard Kipling and Army Music” by Lewis S. Winstock, in which he discusses a review of his book Songs and Music of the Redcoats in The Listener of April 2, 1970, by Francis Dillon. Dillon suggested that insufficient use had been made of Kipling as a source for what soldiers may have sung.

New Armies The forces recruited after the outbreak of the Great War in August 1914. See Kipling’s articles,
The New Army in Training (1915), and Charles Carrington’s Soldier from the Wars Returning, Chapter 5.

battalions Roger Ayers writes: ‘an infantry battalion of the New Army had a strength of 1007 all ranks in a new organisation with a battalion HQ and Machinegun Section and just four rifle companies, each of 227 all ranks. [R.A.]

concertinas small musical instruments held in the hands, played by compressing and extending a bellows which passes air through reeds to produce the notes. 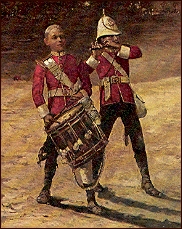 drums and fifes A ‘fife’ is a wood-wind instrument like a small flute, and the simplest form of military band consists of fifes and drums.

In “The Drums of the Fore and Aft” (Wee Willie Winkie and Other Stories), after a panic-stricken retreat, two boys from the band shame their regiment into attacking, by marching across the front playing “The British Grenadiers” on fife and drum. The boys are killed, but the day is won.

E. M. Hale’s painting “The Drums of the Fore and Aft” in Leeds City Art Gallery shows a rather glorified image of: ‘The two little red dots … in the open, parallel to the enemy’s front’.

route-march a serious march for training or moving troops. See the verses “Boots”, and “Route Marchin'”, which has the tramping swing of soldiers on the move:

We’re marchin’ on relief over Injia’s sunny plains,
A little front o’ Christmas-time an’ just be’ind the Rains;
Ho! get away you bullock-man, you’ve ‘eard the bugle blowed,
There’s a regiment a-comin’ down the Grand Trunk Road;
With its best foot first
And the road a-sliding past,
An’ every bloomin’ campin’-ground exactly like the last;
While the Big Drum says,
With ‘is “rowdy-dowdy-dow!” —
“Kiko kissywarsti don’t you hamsher argy jow?“*

Adjutant the officer responsible for administration, reporting directly to the Commanding Officer. He is usually aware of everything that goes on in his unit.

Sir Henry Newbolt (Sir Henry John Newbolt, 1862 – 1938 writer and poet – his robust verse is often confused with Kipling’s. The reference is to his poem “The Toy Band, A Song of the Great Retreat”:

DREARY lay the long road, dreary lay the town,
Lights out and never a glint o’ moon:
Weary lay the stragglers, half a thousand down,
Sad sighed the weary big Dragoon.
“Oh! if I’d a drum here to make them take the road again,
Oh! if I’d a fife to wheedle, Come, boys, come!
You that mean to fight it out, wake and take your load again,
Fall in! Fall in! Follow the fife and drum!

Kipling must have misread the poem – there was only one Dragoon, as far as we know, and he was Major Tom Bridges – see below. See the full text.

Bridges went with his regiment to France on the outbreak of war. C Squadron, which he commanded, was the first unit of the British Expeditionary Force (BEF) to engage the Germans, at Soignes on 22 August. Bridges soon proved himself an inspiring leader of men. He described the incident at St Quentin on 27 August, in which he rallied two demoralized battalions with a tin whistle and drum bought in a toy shop:

The men in the square were a different problem, and so jaded it was pathetic to see them. If one only had a band, I thought. Why not? There was a toy shop handy which provided my trumpeter and myself with a tin whistle and a drum, and we marched round and round the fountain where the men were lying like the dead, playing ” The British Grenadiers” and beating the drum like mad.

They sat up and began to laugh and even cheer. I stopped playing and made them a short exhortation and told them I was going to take them back to their regiments. They began to stand up and fall in, and eventually we moved slowly off into the night to the music of our improvised band, now reinforced with a couple of mouth-organs. When well clear of the town I tried to delegate my functions to someone else, but the infantry would not let me go. “Don’t leave us, major,” they cried, “or by God we’ll not get anywhere.” So on we went, and it was early morning before I got back to my squadron. Our rearguard was unmolested by the Germans, and it looked as if “more haste, less speed” might well have been the description of this part of the retreat.

cholera camp a unit with cases of cholera was sent into camp until the epidemic was over. See Dr. Gillian Sheehan’s notes, the story “The Daughter of the Regiment” in Plain Tales from the Hills, and Kipling’s poem “Cholera Camp” (1896):

Though they’ve ‘ad us out by marches
an’ they’ve ad’ us back by rail;
But it runs as fast as troop trains,
and we cannot get away,…..”

“The Lincolnshire Poacher” a traditional English folk-song, and the quick march of RAF College Cranwell, Lincolnshire, It was also the march of the 10th Regiment of Foot (the Royal Lincolnshire Regiment, now 2nd Battalion of the Royal Anglian Regiment.

It is also the regimental song and march for the 2nd Battalion Royal Anglian Regiment “the Poachers”. and the march of The Lincoln and Welland Regiment of the Canadian Forces.

When I was bound apprentice in famous Lincolnshire
Full well I served my master for nigh on seven years
Till I took up to poaching as you shall quickly hear
Oh, ’tis my delight on a shiny night in the season of the year…

See the text for the full text.

“The Lincolnshire Poacher” is also the the tune to which Kipling’s poem “Screw-gun Mules” in “Parade Song of the Camp Animals” (The Jungle Book) was written:

As me and my companions were scrambling up a hill,
The path was lost in rolling stones, but we went forward still;
For we can wriggle and climb, my lads, and turn up everywhere,
And it’s our delight on a mountain height, with a leg or two to spare!

compassed in this context ‘surrounded’, an echo of several quotations in the Bible and elsewhere, perhaps ‘ With dangers compass round’, from Milton’s “Paradise Lost”, Book 7, 23.

elaborate ceremonial and observance the positive value of ceremonial for men under stress is underlined in a story written in 1917 “In the Interests of the Brethren” (Debits and Credits). One of Kipling’s characters, Mr Burges, a Freemason and a senior figure in his Lodge, says: ‘All Ritual is fortifying. Ritual’s a natural necessity for mankind.’
[So long as it is not overdone to the detriment of good soldiering – see the verses “Song of the Old Guard”, where Kipling warns that the reforms brought about in the Boer War were in danger of being disregarded by traditionalists; Ed.]