The edited text corresponds with that first published in the Pioneer of 8 June 1889.

[Page 258, line 9] Sirsa 150 miles west-north-west of Delhi on the edge of the Bikaner desert. Kipling had been in this general area in 1887 which he described in Letters of Marque.

[Page 259, line 23] Naaman see II Kings. Naaman was cured of his leprosy by Elishah. However, as a punishment to his own servant Gehazi, Elishah declared that his servant should receive Naaman’s leprosy, and Gehazi ‘went out from his presence a leper white as snow’. Kipling made use of his story in his polemical poem “Gehazi” about the Marconi scandal in 1915.

[Page 260, line 7] unmentionable adjective Kipling had already called for an alternative in his story “In the Matter of a Private” (first published April 1888). At that time it would have been unacceptable to use barrack-room swearwords in print or in polite society. Modern standards are more permissive.

[Page 260, line 16 et seq.] The steamship Nawab these comments on the S.S. Nawab need to be read in comparison with his previous transport, the S.S. Africa of the British India Line. The Africa of 2032 registered tons carried 35 1st class and 18 2nd class passengers. (See this website on the British India steamships.)

If the P&O ship Nawab was of a similar size to the next P&O vessel on which Kipling travelled from Canton to Nagasaki and Kobe (the S.S. Ancona) she would normally have carried about 93 1st class and 32 2nd class passengers and therefore have been very cramped with the extra passengers that Kipling describes.

[Page 260, line 21] Colombo The capital city of Sri Lanka (formerly Ceylon), off the SE tip of India, an important seaport.

[Page 261, line 14] Pilsener a lager-type beer based on the Bavarian brewing technique but originating in the city of Pilzen, Bohemia, now in the Czech Republic.

[Page 261, line 25 et seq.] attempt at killing the stewardess At this time of his life Kipling was very antipathetic to the use of white women as servants. He clearly changed his mind later in life (or his wife changed it for him) since he employed female servants at Bateman’s. 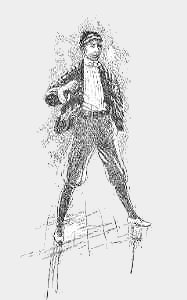 [Page 263, line 3] Albert although younger, this boy is clearly a prototype for the teenage Harvey Cheyne in ‘Captains Courageous’ before he fell overboard into a fishing schooner, and learned the virtues of hard work and discipline on ten and a half dollars a month.