The edited text largely corresponds with that first published in the Pioneer of 24 September 1889. It is worth remembering that Kipling and the Hills were in Japan from mid-April to mid-May, hence the frequent references to the blossoms in these reports.

[Epigraph] Christopher North was the pseudonym used by John Wilson (1785-1864), a Scottish author and journalist who wrote regularly for Blackwood’s Edinburgh Magazine.

However, Kipling was in error in attributing this quotation to North. In fact it comes from Horae Subsecivae (“Leisure Hours”), a miscellany by the Scottish essayist John Brown (1810-82) in a passage where a Scotsman is extolling sheep’s head to an Englishman:

[Page 349, line 3] the Gaul the Frenchman. Gaul was the Roman province in ancient times that included much of what is now France. 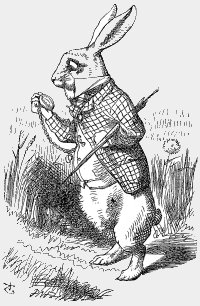 [Page 349, line 7] Tenniel’s picture a reference to the illustration by Sir John Tenniel (1820-1914) of a very smartly dressed White Rabbit anxiously consulting his watch for fear of being late, from Alice in Wonderland.

[Page 349, line 25] lapis-lazuli a bright blue stone used as a pigment or occasionaly as a semi-precious decoration.

[Page 349, lines 29 & 30] abortive thermantidote a ‘thermantodite’ was a cooling device fitted into the windows, working on the principle of drawing air through a dampened screen which, by evaporation of the moisture, should cool the interior of the compartment. This one was ‘abortive’, ie. not functioning properly.

[Page 349, lines 30 & 31] a London and South-Western carriage referring to the L. & S.W. railway company which operated in the south of England at that time.

[Page 350, line 5] Saharunpur and Unballa are towns in the East Punjab region. Umballa (Ambala) is about 140 miles SE of Amritsar and Saharunpur is a further 50 miles SE on one of the railway lines to Delhi. Kipling would have known this route well since it is one way of getting from Allahabad to Lahore. Both places figure in Kim. 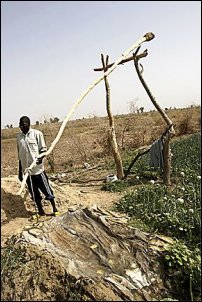 [Page 351, line 1] well-sweeps devices which help to lift buckets of water from a well or stream. They consist of a pivoted beam with a counterweight at the end opposite the bucket.

[Page 351, line 20] Cholera was endemic in 19th century Japan, as it was in India. See Dr Gillian Sheehan’s “Kipling and Medicine”.

[Page 351, line 23] sewage irrigation is the result of the contamination of water supplies with human excrement, whether accidental or deliberate. Human sewage is a very effective fertiliser but carries the high risk of spreading diseases. The process is still used in many parts of Asia.

[Page 352, line 19] entrepôt a free port where foreign imports can be stored in bond before being re-exported without paying customs duty.

[Page 353, line 32] Paddington Swimming Baths Public baths in Queen’s Road, Bayswater, London W2. Presumably Kipling made the comment because some sort of ‘mixed bathing’ took place there, or at least both genders took turns to use the facilities, but nothing has been traced.

[Page 354, line 1] Lady Godiva wife of Leofric, Earl of Mercia in the English Midlands in the 11th century. Legend has it that she rode naked through the streets of Coventry to persuade he husband to repeal a tax. The only one of the townsfolk who looked at her was Peeping Tom, and he was struck blind as a result.

[Page 354, line 2] Actæon was a huntsman in Greek legend who unfortunately came upon the goddess Artemis bathing naked in a forest pool. She turned him into a stag, whereupon his own hounds tore him to pieces. 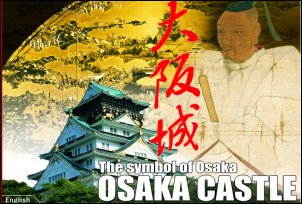 [Page 354, line 5] Osaka Castle Osaka Castle is known as an emblem of the power and fortune of Hideyoshi Toyotomi.

In 1583, Hideyoshi began construction at the former site of Honganji Temple and completed the magnificent castle, which was reputed as being unparalleled in the country. See this site
for photographs and a history of the castle.

[Page 354, line 7] Raighur, Jodhpur Raighur is in the Marathra State on the western coast of India, close to Bombay (Mumbai) and Poona (Pune) on the Western Ghâts (or mountains) which run parallel with the coast (not to be confused with Raichur or Raighar).

Jodhpur is in Rajputana on the edge of the Great Indian Desert; Kipling described his 1887 visit there in Letters of Marque Chapters XII to XIV.

[Page 354, line 23] Tartary a name given by west Europeans from the 14th century to a vast, ill-defined area of eastern Europe and Asia, inhabited by the Tartars, a Turkic people.

The battle between the New Government Army and Tokugawa Shogunate Army broke out«the Battle of Boshi. After the former shogun Yoshinobu Tokugawa escaped from Osaka Castle, a fire erupted in the Castle. Almost all the structures were reduced to ashes. The Meiji New Government requisitioned the castle area.

The Main Tower was rebuilt in 1931 See the Osaka Castle site.

[Page 355, line 10] Akbar … Scindia Jelal-ed-din Muhammed,‘Akbar the Great’ (1542-1605), was the most impressive of the Mogul Emperors of India. ‘Scindia’ or ‘Sindhia’ was the family name of the Maratha rulers of Gwalior, who fought against both the the Moguls and the British in the 17th and 18th centuries. [HC/GW] See Kipling’s verse “With Scindia to Delhi” (Barrack Room Ballads and Other Verses). 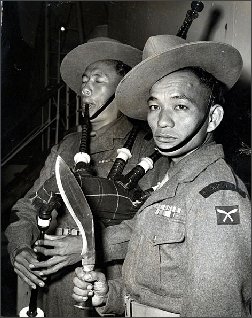 [Page 355, line 21] Gurkhas soldiers from Nepal who have been fighting for the British since 1817. Their traditional weapon is the kukri knife. They are a hardy brave people, one of the martial races of the Indian sub-continent. Kipling had much respect for them, and they figure in a number of his stories.

[Page 358, line 12] Deucalion In Greek mythology, the son of Prometheus. When Zeus resolved to destroy the degenerate race of men by flood, Deucalion built a ship on which he and his wife Pyrrha embarked and were the only humans saved. When they disembarked on Mount Parnassus in Greece, they followed the instructions of an oracle and threw stones behind them. The stones thereupon turned into Greeks. 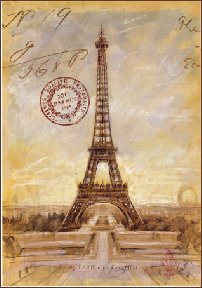 [Page 361, line 2] Shogun was the military leader of the Emperor’s most powerful clans. The reference to Sir Frederick Roberts is an attempt by ‘the Professor’ to explain the events in Japan in 1866-68 in contemporary Indian terms. [HC/GW]

[Page 361, line 7] Rajput the Rajputs were a Hindu hereditary warrior class who lived in Rajputana in the NW of the sub-continent.

[Page 361, line 11] Samurai the Japanese warrior class. They worked for the Daimios (mentioned in Letter XII, who were the feudal Lords under the Shogun.

[Page 361, line 16] Khattri the Khattri were a warrior class from the Punjab, but the term also included merchants.

In Japan’s four-class system, merchants were of the lowest class, below peasants and artisans who were both considered productive and therefore more worthy than the merchants.

[Page 362, line 12] terai-hats is a wide-brimmed felt hat, defined in Hobson-Jobson as ‘a sort of double felt hat, worn when the sun is not so powerful as to require a sola topee’, or pith helmet. Mentioned in “The Cow-House Jirga” (The Smith Administration).

[Page 362, line 15] Siwaliks a range of hills running parallel with the Himalayas.in north-central India and Nepal.