The edited text corresponds with that first published in the Pioneer of 24 May 1889.

[Page 250, line 13] jostle you into the kennel push you into the street gutter. It has nothing to do with dog kennels.

[Page 251, line 9] huqa or ‘hookah’. A pipe for smoking tobacco in which the smoke is drawn through a vessel of water to cool it. 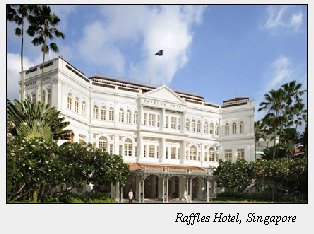 [Page 251, line 14] Raffles Hotel in Singapore first opened for business in December 1887. It is named after Sir Stamford Raffles (1781-1826), the founder of Singapore. One of the great hotels of the British Empire, it has a Rudyard Kipling Suite to this day.

[Page 251, line 20] This Joseph ran a reference to Joseph in Genesis 39,1-20, and the wife of Potiphar, his Egyptian master, whose advances he honourably rejected. [ORG]

[Page 251, line 21] Batavia part of the Dutch East Indies in Kipling’s day, is now named Jakarta and is the capital city of Indonesia.

[Page 252, line 2] nine-inch breech-loaders Britain was in the process of investing in breech-loading cannon to replace muzzle-loaders.

[Page 252, line 13] painter a short length of rope by which a small vessel could be attached to a ship or to a quay. Hence in this analogy the rope that ties a Colony to the Mother country. 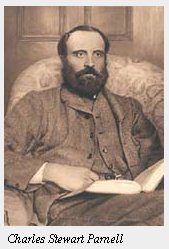 [Page 252, lines 30 & 31] half of a Parnell Commission sitting A long-drawn-out process. Charles Stewart Parnell was the leader of the Irish in the British Parliament towards the end of the 19th century, when the issue of Home Rule for Ireland was very much alive. His reputation was damaged by the publication in 1887 of a letter in The Times which suggested that he was encouraging violent crime in Ireland. A special commission of three judges, which took nearly eighteen months to report, found that it was a forgery. But Parnell lost the leadership of his party after appearing as co-respondent in a divorce case in 1890, and died a disappointed man the following year.

[Page 253, line 10] Borneo is the third largest island in the world and lies about 400 miles to the east of Singapore. Several parts of the island were declared a British Protectorate in 1888. Borneo is now divided between Indonesia, Malaysia, and Brunei.

‘The lines are fallen unto me in pleasant places; yea, I have a goodly heritage.’

Kipling also refers to the “goodly heritage” in the last verse of his poem “Sussex”:

[Page 253, line 28] tin at the time that Kipling wrote, Malaya produced more than half the world’s output of tin. [ORG]

[Page 254, line 2] Indian Collieries Kipling had visited one of these at Giridih, to the northwest of Calcutta, in 1888. The three reports of this are collected under the title The Giridih Coal-fields in From Sea to Sea and Other Sketches, volume II.

[Page 254, line 9] Johore this State is on the southern tip of the Malay Peninsula.

[Page 255, line 31] Beharis people from the north-eastern Indian State of Behar or Bihar. The Ganges flows through the state, which lies north of Calcutta. Its capital is Patna.

[Page 255, line 31] Konkan people from the western coastal strip of India in which Mumbai (then Bombay) lies.