The poem has seven four-line narrative stanzas, each followed by a six-line chorus which is common to all but with minor variations to the beginning of the first lines in order to link it with the last line of each stanza. All goes with a marching swing but the chorus is more heavily stressed. This reflects the narrative, the seven stanzas describing the different stages of a very long march as a complete regiment moves from one station to another, while the repetitive chorus stresses the monotony of day after day of marching.

Since the poem did not appear in a magazine in advance of its initial publication in a collection, no individual early criticism has been found and it gets very few mentions in biographies or critical works. It did not appear in the selection by T S Eliot.

However, it is quoted by Angus Wilson (p. 76) in support of his view that, from the British cantonments along the Grand Trunk Road came: ‘many of the finest of his Indian poems and stories’, a statement followed by the first four lines of Route Marchin’ in its support.
Peter Keating
makes no direct mention of the poem, but he writes (p. 56):

The influence of military music is apparent everywhere in the barrack-room ballads […] Rhythms taken from military music are also employed, most directly in the marching or trooping songs…

For both of these points Route Marchin’ is a prime example.

You can listen to a setting of this poem, where Peter Dawson sings it to a rousing tune reminiscent of “We are the boys of the Old Brigade”, at
this “Route Marchin'” page. A number of other settings are listed in Brian Mattinson’s list of musical settings of Kipling’s verse. [J McG]

It is also collected in George and Christopher Newark’s Kipling’s Soldiers (The Pompadour Gallery, 1993) with an illustration by Bryan Fosten depicting a battalion on the march, 1st Bn. The Dorset Regiment. (See The Burning of the Sarah Sands in Land and Sea Tales) [J McG]
Marching

Right up to Kipling’s day, movement on foot was the way in which the bulk of the world’s population moved from one place to another on land; movement on, or being pulled by, animals being available only to a minority, as was travel on the spreading network of railways. It was no different for armies and competence in military marching had long been recognised as essential for success:

“It was a constant custom among the old Romans, confirmed by the Ordinances of Augustus and Hadrian, to exercise both cavalry and infantry three times in a month by marches of a certain length. The foot were obliged to march completely armed the distance of ten miles from the camp and return, in the most exact order and with the military step which they changed and quickened on some part of the march.”
[De Re Militari – On things military by Flavius Vegetius Renatus, 390 AD).

A similar approach to marching as a drill was taken by the British Army at the beginning of the 19th century as is made clear in Instructions For The Drill And The Methods Of Performing The Eighteen Maneuvers (John Russell, 1804). The ‘eighteen maneuvers’ were all to do with coordinated movements of bodies of men into, during and, if necessary, out of battle with strict attention being paid to the length of a pace and number of paces per minute, known as the cadence.

However, there were also recommendations for sustained long marches which included having trained NCOs as pace setters at the front of a major unit so that it could keep to time, while the body of men behind marched without strict attention to keeping step, maintaining the distance between files or how arms were carried. This combination of the importance of keeping to time coupled with relatively relaxed rules of behaviour when marching at ease was retained in subsequent drill manuals. Sir Garnet Wolseley’s Soldiers’ Pocket Book of 1892 also had a section on ‘Opening out on the March’ as means of allowing both units and individual soldiers in the ranks more room to march and so eliminate the need for shortening pace or stepping out at minor obstructions. 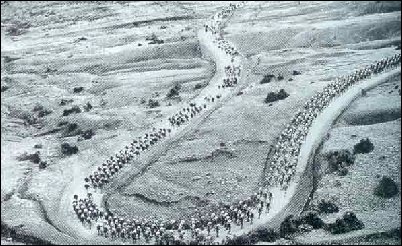 This picture from an unused postcard shows a unit on the march in India, although not on the Grand Trunk Road. The soldiers are marching closed up and in files of four, so it could have been taken at any time up to the early 1920s, when files of three became standard. That it could be as late as that might mean that it was taken from an aircraft, possibly in the Waziristan campaign of 1919-1920.

Nevertheless, it does give an indication of the amount of ground covered by a battalion – twice this length, since there are only some 400 soldiers in the picture. The long and somewhat ragged tail, led by what looks in the original like a couple of carts, would consist of the baggage, cooks, servants, ambulance carts and other followers, even on operations. The Soldiers’ Pocket Book, 1882, reckoned on 2 followers for every 5 soldiers on hill operations in India lasting 10 to 20 days.

There was a slow but steady turn-over of British units in India with some going back to Britain or to some other part of the Empire each year, being replaced by fresh units coming in. In addition, units were moved within India for a variety of reasons, generally to meet some internal security need or, if possible, to avoid keeping any unit in a difficult or unhealthy station for too long. The process of one unit relieving another frequently involved long road marches of the entire unit, including families and Indian servants and followers. Moves by rail were just coming in as Kipling wrote this poem but most moves ‘on Relief’ were still by road.

Where possible, such moves were made in the coolest, driest period, the end of September to January, which was also the time that fresh units would arrive from England. See our notes on “Troopin’ “
The use of the Band and Drums

The regulations for route marches given in Field Exercises and Evolutions of Infantry 1877, the drill book current when Kipling was writing, states:

On all occasions, when moving out of camp or quarters, or when moving after a regular halt upon the march, each corps will march off by word of command, and with music, unless particularly ordered to the contrary. The men must be perfectly silent, dress, and keep the step, as if moving on parade, until the word MARCH AT EASE is given by the commanding officer of the regiment …

One of the problems in the use of the Band was the sheer length of a battalion column, which with eight companies could start out at 1000 yards or more, extending to 1250 yards when marching at ease and ‘opened out’. The Soldiers’ Pocket Book of 1882 recommends that:

Whenever it is possible, have music to march to. If the Band is broken up, the drums and bugles should play together as the French do. Nothing is more martial in sound and the men march a hundred percent better than in silence. If you have nothing else, get your men to sing by companies.

Kipling, who in other works confirms his knowledge of, and reference to, the Soldiers’ Pocket Book, stresses the role of bugle and drum in words and within the marching rhythm of the poem and he also mentions the singing.

For Kipling’s recognition of the importance of military bands, see “The Soul of a Battalion” which is noticed in KJ 261/44 (March 1992),
The New Army in Training, (1915) and Charles Carrington’s Soldier from the Wars Returning, Chapter 5. [J McG]