In “Kaa’s Hunting” the Bandat-Log capture Mowgli and carry him away by their tree-roads high across the jungle to the ruined city of ‘Cold Lairs’. He is rescued by Baloo and Bagheera, and by the terrible Kaa, who wreaks a fearful vengeance on the monkeys.
Here they sing of the wonderful things they are going to do, imagining that words are as good as actions, though anything they set out to do is rarely accomplished.

Those who are outside the law are portrayed as the Bandar-log or monkeys, whose “Road-Song” is one of Kipling’s more flamboyant rhythmic exercises. The rhythm of the lines follows the movements of the monkeys as they swing through the trees, reach for the moon, or drop to earth with their regular taunt thrown at anyone who is not with them: “Brother, thy tail hangs down behind!” So perfectly are sound and sense blended that even the curve of the monkey’s tail, of which they are so proud, is reproduced in the movement of the lines. In the poem’s final stanza, the monkeys continue to play, but the rhythm collapses into a clumsy prose which reflects the emptiness and vanity of their boasts:

Then join our leaping lines that scumfish through the pines,
That rocket by where, light and high, the wild-grape swings.
By the rubbish in our wake, and the noble noise we make,
Be sure – be sure, we’re going to do some splendid things!

They may seem as light and graceful as flying-fish as they
“scumfish” through the trees, but they are really the “scum” of
society, feckless, irresponsible, lacking individuality, capable
only of acting as a pack, dreamers who will never be doers.
They are not only outside the Law: they are beyond it, and its
enemies.

Marghanita Laski (p. 123), discussing the Jungle Books, stresses the importance of obeying the Law and…

…the need to avoid contamination by jabber, (See Verse 3.) rabble-rousers or dreamy intellectuals, here personified by the Monkey-Folk, the Bandar-Log…. 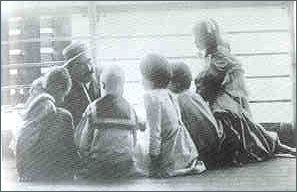 She then quotes a few lines of the poem, all beneath a photograph of Kipling sitting on the deck of a Union Castle liner on passage to Cape Town, telling a Jungle story to Elsie and John and some other children.

[Strangely enough, as Charles Carrington, Kipling’s first official biographer once remarked to this Editor, none of the people who knew him as children, either as a story-teller or in Southsea where he lived and first went to school (See “Baa, Baa, Black Sheep” in Wee Willie Winkie) has, as far as we know, ever come forward in later life with their memories. Ed.]
Roger Lancelyn Green (p. 120) says of the Jungle Books:

As with all stories of this kind, there are readers on whom the magic does not work. These presumably include the critics who have tried desperately to find political meanings in the Jungle Books and disagree among themselves as to whether the Bandar-Log represent the Americans or the Liberals or such ‘lesser breeds without the law’ (“Recessional”) as they believe Kipling was most anxious to insult at the moment of writing.

And Martin Fido (p. 78) has no hesitation in saying,

Intellectuals are consciously attacked as the Bandar-Log: chattering monkey-people who play with ideas – particularly ideas which offend other people – but achieve nothing themselves. The unflattering picture has, naturally, offended many serious adult readers and attracted for Kipling the unfortunate vocal admiration of anti-intellectual philistines. Yet as a comment on the parlour-pink aesthetes who valued their skill in the expression of supercilious malice without making any very obvious contribution to the quality of life around them, it should have been usefully provocative in 1894.

These sentiments are reflected in Frankwell Midmore’s rejection of Hampstead intellectuals in “My Son’s Wife” (A Diversity of Creatures), and Kipling’s poem “In Partibus”:

… But I consort with long-haired things
In velvet collar-rolls,
Who talk about the Aims of Art,
And “theories” and “goals”…

Other references to monkeys are in “Collar-Wallah and the Poison-Stick”, also the poems “The Legends of Evil” and “Divided Destinies.”

See also Lockwood Kipling’s Beast and Man in India (Chapter III) for more on monkeys and the respect paid to them by the Hindus who venerate Haunman, the monkey-god. Hanuman also appears in “The Bridge-Builders” (The Day’s Work).

festoon an ornamental garland of flowers, fruit etc. suspended between two points – a line of monkeys swinging through the branches would look similar.

branchy monkeys sitting in rows on branches – a word probably invented by Kipling.

pranceful an omnibus word perhaps also invented by Kipling from ‘prancing’ and ‘ungraceful’ signifying ‘skipping along in an ungainly manner.’

extra hands momkeys can grip with their feet and use them as an extra pair of hands. 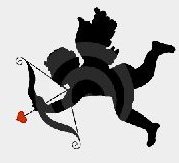 Cupid’s bow The curve of the upper lip in a woman may resemble the bow used by Cupid, the Roman God of Love, to propel his arrows.

scumfish there has been much speculation as to the origin and meaning of this word which Kipling also probably invented – perhaps a combination of ‘skirmish,’ ‘skim’ and ‘flourish.’ See KJ 243/42, 328/03, and 332/07.