This poem was published in the Civil and Military Gazette (CMG), on 16 January 1886, with the signature R.K. and the heading below: 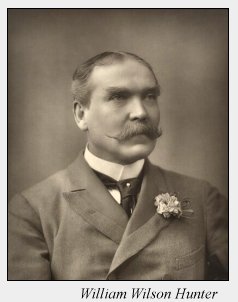 ‘He was aware how heavily the least addition of pressure must fall on Englishmen in India struggling to maintain a position here, and educate their children at home, with the depressed rupee; but his Lordship’s words of sympathy, last Monday, no doubt, had gone to their heart. ‘—Report of the Hon’ble W.W.Hunter’s speech in the Legislative Council, Jan. 11th.

It is included in Kipling’s Scrapbook 2 of his own press cuttings, in the Kipling Papers at the University of Sussex).

‘Quid Pro Quo’ means something for something, in Latin. In this instance the poet gives 2% of his income; in exchange.  His Lordship gives his sympathy.

William Wilson Hunter (1840-1900) was an eminent Anglo-Indian administrator, historian and compiler of the Imperial Gazetteer, a statistical survey of the Indian Empire. A member of the Viceroy’s Council, he was knighted in 1887.

Rutherford notes that the CMG for 6 January 1886 contained a news item on the meeting of the Legislative Council in Calcutta on 4 January. It reported a policy statement by the Viceroy and a financial statement by Sir Auckland Colvin, the Financial Member, the burden of which was that increased revenue was required to balance the falling value of the rupee [see “Exchange”], the increased cost of expenditure on defences on the North-West Frontier and the war in Burma.

The restoration of the cut in duties on salt made in 1882 or the reimposition of import duties had been rejected as options, since their effect would have been “to increase the burdens of the poorest classes in the community”. Instead it was proposed to introduce an Income Tax of 5 pice in the rupee (some 2.6%: there were 192 pice to a rupee) for incomes above 2,000 rupees per annum, affecting a large number of British officials down to quite junior grades. (Kipling’s salary as an Assistant Editor was 4,500 rupees per annum after a year’s service) This would produce revenue from “the classes in this country who derive the greatest security and benefit from the British Government but who contribute the least towards it.”

The tax was clearly much resented by the Anglo-Indian community, for whom sympathy from on high was no recompense, as the poet sarcastically points out. This tax is also the subject of Kipling’s better-known poem “The Rupaiyat of Omar Kal’vin”, collected in Departmental Ditties. For the detailed figures see David Page’s notes on the poem.