This poem was first published in Puck of Pook’s Hill in 1906, in association with the story “Weland’s Sword” and reprinted in numerous subsequent editions of that collection.

The poem was later collected in Songs from Books and DV. In both, two stanzas are added at the beginning.

See you the ferny ride that steals
Into the oak-woods far?
O that was whence they hewed the keels
That rolled to Trafalgar.

And mark you where the ivy clings
To Bayham’s mouldering walls?
O there we cast the stout railings
That stand around St. Paul’s.

A third is also added after the present first stanza.

Out of the Weald, the secret Weald,
Men sent in ancient years,
The horse-shoes red at Flodden Field,
The arrows at Poitiers.

A rendition of the poem by Peter Bellamy can be found  here.

Daniel Hadas points out that the historical episodes in this poem are invoked in reverse chronological order, and all the specific allusions to places of origin are to places in or near Sussex. Also, the poem invokes the four storied attempts to conquer England: Caesar’s, the Vikings’, William the Conqueror’s, and the Spanish Armada’s. [D.H.]

The line references below relate to the full ‘long’ version of the poem.

[Line 1} ride a cleared way through the woods  for riding on horseback. [Wordworth Edition]

[line 3] this was where they hewed the keels  Daniel Hadas notes that the theme of seeing the ship-to-be in the forest goes back to a fragment from the Roman po et Ennius’ tragedy Medea. See Loeb Classical Library3, vol. 294, Remains of Old Latin: volume I, pp. 312-13. Translator: E. H. Warmington. [D.H.]

[Line 4] Trafalgar The famous British naval victory won by the Royal Navy under Vice-Admiral Lord Nelson in 1805. He defeated the combined French and Spanish fleets but was killed at the moment of triumph. 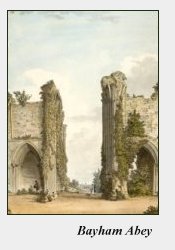 [Line 6] Bayham’s mouldering walls The ruins of Bayham Abbey are about 5 km south of Tunbridge Wells on the border of Sussex and Kent in southyern England. They are now in the care of English Heritage. The Abbey was founded in 1207. It was among the first to be dissolved by Henry VIII in 1538 when he appropriated the lands of the monasteries.

These are the railings in question.

When a house was built on the land, the old abbey was retained as a picturesque ruin. Samuel Grimm sketched it (right) about 1785, emphasising the grand scale and picturesque character of its ivy-clad walls. 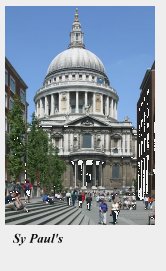 [Line 8] St. Paul’sThe present St. Paul’s Cathedral in London, built by Sir Christopher Wren between 1675 and 1710 after Old St. Paul’s was destroyed in the Great Fire of London in 1666.

[Line 12] King Philip’s Fleet The Spanish Armada, sent to invade England by Philip of Spain in 1588, but defeated by Francis Drake, and largely destroyed afterwards by south-westerly gales off the coasts of England Scotland and Ireland. See also “Simple Simon” in Rewards and Fairies.

[linf 13] the Weald  the lower central part of Sussex north of the Downs, an ancient oak forest, and the site of early iron-works. Bateman’s, an iron-master’s  house, lies in the Weals.

[Line 15] Flodden Field English victory over the Scots in 1513 in which the Scottish King James IV was killed and with him the flower of Scottish chivalry.

[Line 16] Poitiers English victory over the French in 1356; one of the battles of the Hundred Years’ War in which English archers played a decisive role.

[Line 20] Domesday Book the survey, in 1086, on the orders of William I, which lists the holdings of all the land of England under the King as feudal lord. See also Below the Mill Dam in Traffics and Discoveries, in which the Spirit of the Mill speaks in the language of Domesday Book.

[Line 24] the day that Harold died the Battle of Hastings, 14 Oct. 1066, in which the Normans, under William ‘the Conqueror’, defeated the Saxons under King Harold. But see also “The Tree of Justice”, the last story in Puck of Pook’s Hill.

[Line 25] levels pasture-land, covered by sea at the time when King Alfred built a navy to fight the Norse pirates) (Wordsworth Edition)

[Line 28] Alfred’s ships in his  wars with Danish invaders, Alfred the Great (849-99) made extensive use of sea power.

[Line 31] there was a city Kipling may have been influenced by the Roman sites at Fishbourne and Bignor. [D.H.]

[Line 36] Caesar sailed from Gaul Julius Caesar’s first invasion of Britain took place in 55 BC. The Roman province of ‘Gaul’ was – in essence – what is now France.

[Line 39] The lines the Flint Men made To guard their wondrous towns. Some earthworks on the Susse Downs, called “causewayed camps”, date back to Neolithic times, before the discovery of metals, when tools and weapons were made from flint.

The term “camp” may have misled Kipling into believing th  ey were permanent settlements. But archaeological evidence implies that the earthworks were visited occasionally by Neolithic groups, probably for refuge, rather than being permanently occupied. They are now less specifically known as “causewayed enclosures.”

See also “The Knife and the Naked Chalk” in Rewards and Fairies.

[Line 47] Merlin the legendary wizard who plays a large part in the tales of King Arthur.

Daniel Hadas notes hat in in Middle English gramarye more commonly meant grammar, learning, though this always had a hint of the  occult for un-learned folk.  In 1805 Walter Scott in The Layof the last Mistrel (III, xi, 73)  used it to mean magic., occult learning.

“What e’re he did of gramarye was always don maliciously”.

Kipling is echoing the Victorian medieval / Arthurian revival expressed in the paintings of the pre-Raphaelites,  and the poems of Tennyson and other poets.  [D.H.]