There is a version of this poem in Kipling’s own handwriting in the Kipling Papers in the Special Collections at the University of Sussex. It is not dated, nor does it have a title, but a drawing of a naked devilkin wearing spectacles, and signed ‘Rudyard Kipling.’ Pinney dates it to 1886, noting that the poem was accompanied by a gift of paper, pens, blotter, and clip, to his sister Trix, and was no doubt the third of three poems of that time, with “With a Fan to the Mother” and “With a Study Chair to the Pater”. It shared its antique language with the latter. 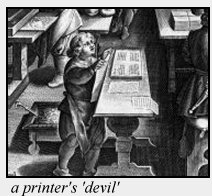 A Printer’s Devil is a junior assistant in a printing works, so an appropriate persona for Kipling to assume, after his years of hands-on experience with print-setters at the CMG who had not a word of English.

He considers what to give a Maiden (his sister Trix) for Christmas—gloves, a fan, mittens, a petticoat ? Because (Verse 4) all four of the ‘Family Square’ make their livings—to a greater or lesser extent—by paper and pen, he decides on a writing set: pens, paper, paper-clip, and blotter: ‘A Blotter lest she blott’ .

Ten years later, E. Kay Robinson, Kipling’s Editor at the CMG, published a memoir, Kipling in India, in which he particularly commented on Kipling’s own tendency to throw ink about:

There was one peculiarity of Kipling’s work which I really must mention; namely, the amount of ink he used to throw about. In the heat of summer white cotton trousers and a thin vest constituted his office attire, and by the day’s end he was spotted all over like a Dalmatian dog. He had a habit of dipping his pen frequently and deep into the ink-pot, and as all his movements were abrupt, almost jerky, the ink used to fly. When he darted into my room, as he used to do about one thing or another in connection with the contents of the paper a dozen times in the morning, I had to shout to him to “stand off;” otherwise, as I knew by experience, the abrupt halt he would make, and the flourish with which he placed the proof in his hand before me, would send the penful of ink—he always had a full pen in his hand—flying over me.

Trix had come out to India at Christmas 1883, aged fifteen, completing Rudyard’s ‘Family Square’, which they all cherished. Trix was witty and highly literate, and with Rudyard embarked on a series of literary games and compositions, which by the Spring of 1884 had generated a great many poems, mainly parodies of established poets. Rudyard had published some of them in an edition of 150 in August 1884 under the title Echoes by Two Writers.

The following year she contributed with Rudyard and her parents to Quartette, a Christmas Annual by “Four Anglo-Indian Writers”. The printing of this on the presses of the CMG had been an epic all-night operation, drawing on all Rudyard’s experience as a ‘printer’s devil’, as described in a letter to their cousin Margaret Burne-Jones. (See Thomas Pinney (Ed.) Letters of Rudyard Kipling vol 1 pp. 104/5).