This poem first appeared in The Times on February 23rd 1933, and the Magdalene College Magazine for February 1933, under the title “To the Companions”. It was written for the Samuel Pepys Fellowhip Tercentenary celebrations at Magdalene College Cambridge. It should not be confused with the poem of 1926 with that title. It is listed in ORG as No 1216.

It is collected as “Samuel Pepys” in:

The poem, echoing Kipling’s devotion to the Roman poet Horace, is replete with classical allusions which Kipling clearly felt were appropriate to the dignity of the Samuel Pepys tercentenary. It celebrates the solid achievemnts of Pepys in building a navy to make Britain invulnerable. It also salutes his enjoyment of the pleasures of life, his love of the arts, and his remarkable frankness in chronicling the sometimes shameful details of his love affairs and personal conflicts, in a way that speaks to the reader. 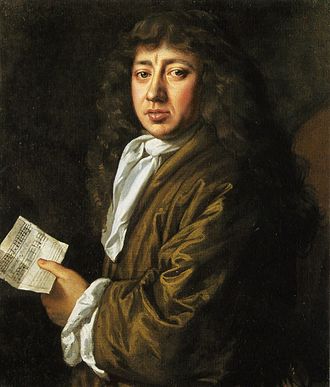 Samuel Pepys (1633-1703) is popularly known for his diary, which he kept for some ten years, in shorthand. It was published in the 19th century and has been of great interest ever since. He reported on the politics of the Restoration of the monarchy, from 1660, after the Civil War and the death of Cromwell, he witnessed the Great Fire of London, and the Great Plague.

He also wrote about his personal life, his work, his finances, and his social life, including many everyday details. He enjoyed wine and good food, music and the theatre, and had many amorous liaisons, which he recorded frankly and in detail.

He studied at Magdalene College, Cambridge, and went on to become one of the most effective administrators of his day. He rose to be Chief Secretary at the Admiralty during the reigns of Charles II and James II, where his genius for organisation turned a corrupt and incompetent force, recently defeated by the Dutch, into a magnificent fighting machine. He became a Member of Parliament and a Justice of the Peace.

Kipling had long been interested in Pepys: Ann Weygandt (p. 43) notes that he uses the characteristic phrase from Pepys ‘So home’ at the beginning of chapter V of A Fleet in Being (1898). She also points out that he characterises Pepys in a passage in “Dead Kings” p. 257 in Letters of Travel (1892-1913). Kipling is recounting what he had been told by a long-dead noble, who had been Minister of Agriculture in ancient Egypt, speaking from his painted tomb:

“I was very like your friend, the late Mr. Samuel Pepys, of your Admiralty. I took an enormous interest in life, which I most thoroughly enjoyed, on its human and on its spiritual side. I do not think you would find many departments of state better managed than mine.”

Oak a tree of the genus Quercia of which there are some 600 species. The wood is very hard, and necomes harder with age. It was very suitable for building ships in the days of sail, hence the Royal Navy’s March Past anthem, “Heart of Oak”.

Daniel Hadas notes that the oak simile in the first three verses are reminiscent of that in Aeneid 4, 441-9, describing Aeneas resisting Dido’s entreaties. Dryden’s translation:

As when the winds their airy quarrel try,
Justling from every quarter of the sky,
This way and back the mountain oak they bend,
His boughs they chatter and his branches rend …

indomitable Over the years the Royal Navy has had several vessels of this name, which means ‘unconquerable’.

Ostia’s mole A mole is a jetty or breakwater where ships can moor for loading and discharging cargo. Ostia was the port for Rome in ancient times. It is now a pleasant seaside resort.

bent to frame worked to shape the ribs of the vessel.

beaked liburnian Liburnia was a region of seagoing people, bordering the Adriatic sea, whose name was given to the main type of Roman warship, with a reinforced ram bow for sinking enemy vessels. This remained part of naval design until towards the end of the 19th. Century.

triple bank a galley with three banks of oars. A trireme.

doves Doves and pigeons belong to the large bird family Columbidae They are generally seen as suggesting calm and gentleness.

prescient far-sighted, forward looking. Pepys reorganised the administration of the Navy and did it so well that his work remained the foundation of Naval organisation into the Twentieth Century: ‘Since even now his orders hold’.

Venus the goddess of love. Pepys recorded his amours in great detail, even noting the price he paid to ‘Ladies of the Night’.

Liber  In classical Latin, “Liber” is simply one of the names of Bacchus/Dionysus, and is used to refer to wine, just as Venus is to love.  [D.H.]

Stolen Draught … Secret Bread Perhaps the Bread and Wine used in a communion service, but maybe simply food and wine, taken where he could find them.  Philip Holberton writes: I think the emphasis here is on “Stolen” and “Secret” – referring to the “sordid loves” of Verse 7. [P.H.]

Clio One of the nine Muses in Greek classical tradition. Others include Kallichore, Helike, Eunike, Thelxinoe, and Terpsichore. Between them, they cover all the Arts of Music, Poetry etc.

Clio was the Muse of History, referring to the amazing self-revealing honesty of the Diary [P.H.]

This verse refers to his Diary which he kept in shorthand and partly in cypher, for some ten years, recording not only his sexual life in detail but his stratagems and lapses from good taste.