This poem, listed in ORG as No 925, was first published on September 16th 1909 in the London Standard, as “A Patrol Song”, and in The Scout of September 18th as “The Scout’s Patrol Song”. It was set to music by Ernest Harcourt. Rather surprisingly it was not included in  Land and Sea Tales for Scouts and Guides (1923).

This song is a rallying cry for the Scout. He must be prepared, organised, and above all alert when out on patrol, looking out for danger, ahead or behind him. He must also take care to handle himself well, maintaining his effort, keeping his temper, uncomplaining. It was written for Robert Baden-Powell, founder of the world-wide Scout movement. (See Hugh Brogan p. 31) 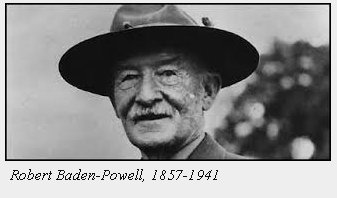 Kipling and Baden-Powell came from similar backgrounds, and probably met in India in 1883 or 1884. Baden-Powell was stationed at Muttra, south of Delhi, as a young officer, when Kipling was in Lahore as a young journalist. There was a family connection, since B-P’s elder brother had been involved with Kipling’s father in setting up the Lahore museum. (See Hugh Brogan pp. 17-18)

The two shared many ideas, and got to know each other in Capetown in 1901, during the South African War (1899-1902), where Baden-Powell had commanded the British defences during the seven month siege of Mafeking. After the relief of Mafeking, in May 1900, he became a national hero and was promoted as the youngest Major-General in the British army. Both he and Kipling had been appalled by the early failures of the British forces in South Africa, and the lack of fitness of their recruits. Both, after the war, were advocates of better training in preparation for future conflcts.

Baden-Powell, a prolific writer, had written a very popular training manual on Aids to Scouting for NCO’s and Men in 1899. From 1907 he was developing his ideas for what was to become the Boy Scouts. In 1908 he published Scouting for Boys, borrowing many ideas from Kipling’s works.
He wrote that:

He gave a summary of Kipling’s plot and also included ‘Kim’s Game’, in which boys have to memorise a variety of objects, along the lines of the Jewel Game (Kim p.224). When the first rally of the Boy Scouts movement was to be held at Crystal Palace in 1909, Kipling wrote this poem for it at Baden-Powell’s request.

In the Preface to Scouting for Boys Baden-Powell claimed: ‘We have no military aim or practice in our movement.’ But undoubtedly some of this song applies more to soldiers on patrol in wartime than to schoolboys in the English countryside. For instance Verse 3:

Look out for the birds of the air…
They’ll tell you how and where
The other side’s concealed.

Although in the next line the bird is identified as an English blackbird, the lines echo the Captain’s observations in one of Kipling’s Boer War stories, “The Way that he Took” (p. 48):

The bird swooped towards the second flat-topped kopje, but suddenly shivered
sideways and wheeled off again, followed intently by the Captain’s glance.
“And that kopje’s simply full of ‘em, [the Boers] too,” he said.

In the poem ‘the boulder that may be a hat’ (verse 4 line 7) echoes what the same Captain saw in the story a little later:

A stone, a small roundish brown boulder on the lip of another one. seemed to move slightly. One cranny between the rocks was pinkish, where blue sky should have shown.

And lines 5-6 of verse 5 are hard to apply to a Scout Patrol:

A sign mis-read as you run
May turn retreat to a rout.

Kipling himself must have hoped that Scouting would somehow provide boys with sufficient training to take on – and defeat – the Guard on manoeuvres as the Schools did in “The Army of a Dream” written in 1904 (Traffics and Discoveries p.291). Birkenhead writes (p. 257):

He was a fanatical supporter of the National Service League, through which Lord Roberts, in the twilight of his life, urged upon unheeding ears the need for conscription.

He had. after all, recommended the same cure for the ills of “The Islanders” in 1902:

Each man born in the Island broke to the matter of war.

The Boy Scout movement had grown out of Baden-Powell’s experienc in war, and Kipling’s support for it arose from his conviction that Britain needed to be ready to fight another war.
But as Peter Keating points out (p. 218)

The popular assumption that Kipling was intimately involved in the Boy Scout movement is based largely on the adoption by Baden-Powell, the movement’s founder, of the Jungle Books, which were written long before the Boy Scouts were even thought of. Kipling knew Baden-Powell, admired the work he was doing, and was willing to help him when possible, but his personal connection with the movement was relatively slight.

In fact the Jungle Books did not become important to the movement until the founding of the Wolf Cubs in 1916. In a later edition of Scouting for Boys Baden-Powell wrote:

The training of the Wolf Cubs is founded on the romance of the jungle.