This poem was first published n the second edition of Departmental Ditties and Other Verses in 1886. See ORG Volume 8, page 5150 (verse number 226). It was first named “Her Majesty’s Mail” but Kipling himself gave it the present name. See also David Alan Richards (p. 15).

Kipling pays tribute to the sturdy men who carried the mail on foot in remote places, braving the dangers from terrain, weather and animals.

The poem has an echo of the cantering rhythm of the later song of the Cavalry Horses in “Parade Song of the Camp Animals”, written eight years later for The Jungle Book (1894):

By the brand on my withers, the finest of tunes
Is played by the Lancers, Hussars, and Dragoons …

It is also somewhat reminiscent in style of “How we brought the Good News from Ghent to Aix”, by Robert Browning, one of Kipling’s favourite poets:

I sprang to the stirrup, and Joris, and he;
I galloped, Dirck galloped, we galloped all three…

The piece has not, though, been significantly noticed by the critics.

There has been a postal service in India from the thirteenth century when horsemen and runners were employed, the latter – the dak runner – providing most of the service. (Dak is the Hindi word for post or mail.) He had a cleft stick with which the mail-bag was carried. At night, he lit twigs to guide him on his way.

The runners had to face much hardship and danger, wild animals, bandits, swollen rivers and snow-capped mountains. The stick and a spear did not provide much protection but they kept running and delivered the mail. They were a hardy race of people, honest, with a great sense of duty. Today runners are still used in some parts of the country where wheeled traffic is not possible. 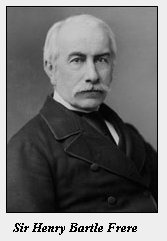 Sir Henry Bartle Frere, 1st Baronet, (1815-1884) was appointed Chief Commissioner of Sindh in 1850. The next year he founded what was to become the modern Indian postal service. 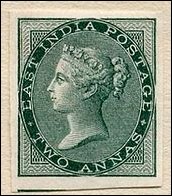 the Empress of India Queen Victoria (1819-1901.) who succeeded to the throne in 1837 and was created Empress of India in 1876.. She is mentioned from time to time in Kipling’s prose and verse – sometimes in a somewhat light-hearted manner

lords of the jungle an echo of verse 5 of “The Law of the Jungle”, which follows “How Fear Came” in The Second Jungle Book:

Keep peace withe Lords of the Jungle — the Tiger, the Panther, and Bear.
And trouble not Hathi the Silent, and mock not the Boar in his lair.

[‘Hathi’ is the elephant]

In “Toomai of the Elephants” (The Jungle Book, page 243) Machua Appa, the head-tracker, addresses the elephants as ‘my lords’.

Home in this context the United Kingdom.

bells the runners were also issued with bells and, in the hills, a bugle to announce tbeir approach.

Per a word of many meanings, here signifying ‘by’.

torrent in spate a rapid river in flood

ford a shallow section of a river where it can be crossed by animals and men on foot. See “In Flood-Time” (Soldiers Three), the opening of “The Head of the District” (Life’s Handicap) and “Ford o’ Kabul River”.

aloe a plant of the family Liliaceae.

rose-oak a tree or shrub in the genus Quercus of which there are about 600 species in Europe, Asia, and America.

fir (Abies) a genus of 55 species of evergreen conifers in the family Pinaceae, found in mountains in North and Central America, Europe, Asia etc.