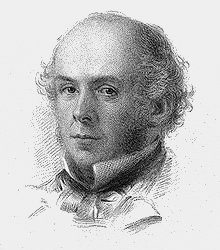 Clough wrote a long poem called “The Bothie of Tober-na-Vuolich” which inspired Kipling’s parody. He was a refugee from academic life, resigning his fellowship at Oxford because he felt unable to to teach the doctrines of the Church of England.

These verses describe a party of motorists, their car breaking down and running out of petrol, finding a blank signpost, which has been repainted but not re-written. A Radical passenger holds forth at length about this in the manner of Mr Lingnam, in “The Vortex” (A Diversity of Creatures).

The others get tired of his rantings and abandon him in the countryside, like the kidnapped constable in “Steam Tactics” (Traffics and Discoveries). Like Jevon in “A Friend’s Friend” (Plain Tales from the Hills) he is not heard of again.
Ann Weygandt (p. 116) comments:

Kipling’s only conspicuous reference to … Clough occurs in The Muse among the Motors. “The Bother” parodies “The Bothie of
Tober-na-vuolich’s” monotonous hexameters, borrows Adam the tutor’s
name, and substitutes “Hugh the Radical” for Philip Hewson, radical poet.

It presents an accurate picture of Clough’s technique; but more happens in its eighteen lines than in eighteen pages of “The Bothie’s” dull and leisurely progress. Hugh’s ejection from the car seems to imply that Kipling would like to throw Clough overboard, but we must not take the suggestion too seriously; if Kipling disapproves of Clough’s political leanings, he thinks enough of four of his lines to use them for a chapter heading.

[Line 2] sprocket a toothed wheel which engages with a chain.

[Line 5] Radical one favouring change and political reform, politically on the left and most unpopular with Kipling.

[Line 9] son-of-a-gun an epithet with a trace of contempt, originally applied to boys born afloat, when women were permitted to accompany their men to sea; [Oxford English Dictionary]/