This poem celebrates Kipling’s happiness at being in a tropical climate. His visit to Brazil took place in February and March 1927, so he escaped the English winter, which he hated, and (verse 2) the ‘Awful East Wind – the coldest wind in England.’

You can go when you are old Kipling was 61 when he finally managed a trip to Brazil, which he had dreamed of at least since he published the Just So Stories in 1902. (See his poem “I’ve Never Sailed the Amazon”.)

These verses list many of the distinctive things that show you are in a nice hot climate.

The deep Verandah A roofed open pillared portico round the house to shade it and keep it cool.

The pale Magnolia A tropical tree with showy cup-shaped flowers. 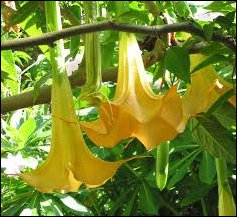 Firefly One of “The Friends’ who greeted Kipling in Brazil.
.

The milky beaches In his second article about Brazil, Kipling describes the waves coming in on Copacabana Beach as ‘milky-mouthed rollers.’ .

There isn’t any Door that need be shut! This Editor once lived on a tropical island. The house there not only had no Door that needed to be shut, it had no door that could be shut. All internal doors were double swing doors like those of a Western saloon, with the bottom a foot off the floor so that the silky Breezes could blow everywhere.