Published in the Morning Post (London), December 7th 1927, and in Liberty (New York) on January 7th 1928. Collected in Brazilian Sketches, Doubleday Doran, New York, 1940, in the Sussex Edition Vol. xxi, and in an edition by P E Waters and Associates in 1989.

‘In Rio, which he reached on 13 March 1927, Ripling went for an evening tour through the City Centre, Botafogo and Copacabana. Copacabana, in the south of the city has now been developed out of all recognition with high-rise flats and hotels. It has been said that if an emergency required all of the inhabitants of Copacabana to be on the streets at once there would not be enough room for them.

As he says. Santa Tereza was the hill on his right during the early part of the drive and the “Mountain that Runs” was, presumably, Corcovado. From his description of the harbour, he must have stayed in a hotel in Botafogo, which in those days was what Cobacabana now is. The Botanical Gardens are also in the southern area of the City west of Copacabana and Lagoa, the big inland lake below Corcovado.’ [P.W.]

Place de la Concorde A central point in Paris, famous in Kipling’s day for the fast but skilful driving of its taxis. 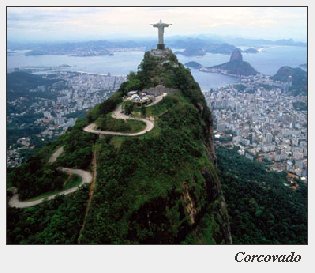 The Mountain that Runs Kipling must have been referring to Corcovado, visible from all over the city. The familiar statue of Christ was not erected until some years after Kipling’s visit. [P.W.]

tramp A tramp steamer, an often quite small ship which picks up cargoes along her route as she can find them.

when the Pope first gave The Brazils to the Portugals In fact, he didn’t. The Americas were ‘discovered’ by Christopher Columbus, a Genoese, in 1492, on behalf of the King of Spain. There was, at that time, no knowledge that Columbus had reached the edge of great new continents.

In May 1493, to prevent conflict between two sea-going Catholic nations, Pope Alexander VI – a Spaniard – ‘gave’ Spain all lands west of a line 100 leagues (some 320 miles or 510 km) west of the Cape Verde Islands, off the coast of Africa, already held by Portugal. This – in theory – would have made Spain mistress of all the Americas. However. the Portuguese, rather farsightedly, objected, and in 1494 made the Treaty of Tordesillas directly with Spain. This moved the demarcation westwards a further 270 leagues, to a line 370 leagues (1180 miles or some 1900 km) west of the Cape Verdes, entitling the Portuguese to settle the coast of what is now Brazil. The Pope was not involved in this decision, though he ratified it in 1506.

Neither England nor France, both seagoing Catholic nations, were privy to these arrangements, and when – later – their sailors ventured to the Americas,they took little heed of them. 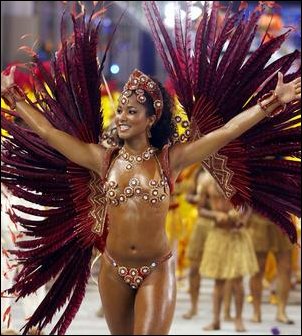 carnival The Rio Carnival (right) is a spectacular street party, long planned for, and imitated by many carnivals in other parts of the world. .

A Maxim A single-barrelled, quick-firing water-cooled machine-gun, invented in 1885; much used in colonial wars against more numerous but less well armed opposition. It was calculated – like rain in Brazil – to cause crowds to rush for cover. 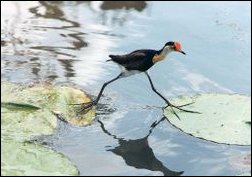