Paul Waters writes: From Sao Paulo Kipling visited an up-country coffee estate. There is not enough information to pin-point the location of this, but a reference in the Sketch of the Sao Paulo Railway to having seen an electrified railway during his tour suggests that he may have travelled to Campinas and beyond by the Paulista Railway, which had the only electrified main line in the area in 1927.

Rand Short for Witwatersrand, the great gold-mining district of the Transvaal in South Africa.

The Greatest of South Africans Cecil Rhodes, the millionaire British empire-builder of Southern Africa, much admired by Kipling.

red “Gumbo” soil Highly elastic, clay based soil. When it rains, the clay in the soil absorbs the moisture and swells. When the soil dries out, the clay loses its moisture and shrinks – good for growing cotton, but bad for foundations.

… Houses exercised an extraordinary power over Kipling. He records … how a certain ancient house on a coffee plantation was so fascinating to him, beckoning and speaking to him, as it were, that he could not concentrate on or even find interest in such topics as coffee-bean farming on which his hosts wished to enlighten him. All he could think about was that house with the “deep breathing spirit.” Surrounded by talk of how the coffee is shipped north, how the government is attempting to regulate its price, how it is kept stored in large warehouses, and so forth, Kipling wished only to learn more about the house: “One wanted to know about this house. Who had lived here in the old days? And particularly, who lived here now of nights?” Houses could cast a deep shadow over him if they emitted moral choke-damp. If they were free of such an atmosphere, on the other hand, they could lift him emotionally. Much of his life he searched for the house that spoke to him not of despair and desolation but of hope and peace.

Of that coffee … I had never before tasted coffee: This paragraph by Kipling led to lively correspondence from people all over the world, about the merits of different types of coffee.

Mocha coffee Originated in an Arabian port at the southern entrance to the Red Sea, now in Yemen.

Assam amd Tirhut (or Terhoot) Tea-growing regions in the hills in India. 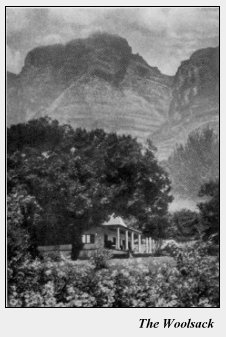 There used to be a farmhouse not far from Cape Town Kipling may have been referring to “The Woolsack”, the house lent to him and his family by Cecil Rhodes where the Kiplings wintered every year in the late 90s and early 1900s, though this was a new house, built in the old style.

farm Particularly used of the coffee plantations established in theonterior of Brazil i9n the 19th Century.