First published in In Black and White (Volume 3 of the Indian Railway Library) in January 1889, and collected in Soldiers Three and Other Stories in 1892.

Soldiers Three is available as an e-book on Amazon, price £2.29 together with our notes. Various paperback editions, and a Kindle edition, are also available.

This many-layered tale is set in Lahore, where Lalun, a talented and beautiful courtesan, entertains in her chamber on the city wall. Her ‘little white room’ is a centre of gossip, and she knows as much as anyone about what is going on in the City. Lalun is visited by many men, distinguished and otherwise, including the narrator and a young Muhammadan, Wali Dad, with whom he has many talks. Wali Dad has had an English education, and feels uneasily poised between the Indian and European worlds.

There is a lengthy introduction by the narrator about the unremitting efforts that the Indian Government makes to keep order in this mysterious land of many creeds and rivalries, and the plots and pressures it has to cope with to keep order, detaining Indian leaders who might threaten British rule.

One such leader, Khem Singh, a formidable old Sikh, has been imprisoned in Fort Amara, where he is treated with respect by the young officer in command, to whom personally he has promised not to escape. Then, on the eve of the great Muslim festival of mourning, the Mohurrum, which seems bound to lead to communal riots, his Captain, a brutal racist, returns from leave and takes over. (Kipling’s contempt for the Captain’s ignorance and lack of respect for Indians is evident).

There is a night of riot in the city, which is suppressed very skilfully by the police and troops, with little bloodshed. Amidst the turmoil Lalun helps a bedraggled old man up into her window, and flatters the narrator into escorting him across the city through the riot. He duly does so, only realising later that it had been Khem Singh. As it turns out, though, with time and age the old man’s power to raise rebellion is gone, and he returns to captivity.

Although the British knew enough to preserve the ‘Pax Brittanica’, they understood little about the subtle undercurrents of Indian life. This is a consistent theme running through the tales in In Black and White.

The story owes some of its names and atmosphere to a historical novel obscure even in its own day, Lalun the Beragun (1879) The author’s name on the title-page, ‘Mirza Moorad Alee Beg’, is a pseudonym.  (for the theosophist, Godolphin Mitford. Ed.).  Besides a detail in ‘the song of old days’ and the name Lalun, the main bearing of Lalun the Beragun on Kipling’s story concerns its treatment of the battle of Panipat (7 Jan. 1761), in which the Afghans defeated the Mahrattas.

The Mahratta leader, Mohadji Rao Sindhia, fled from the battle to Delhi with (in Alee Beg’s romantic version) a courtesan, Lalun, on his saddle; but just before he reached Delhi she slipped from his horse in order to ensure his safety, and fell into the hands of a Muslim pursuer. He himself fell to the ground and fainted from exhaustion.

Kipling modelled his ballad ‘With Scindia to Delhi” on Alee Beg”­ account of this episode, and refers to it in the course of “On the City Wall” · which he also appropriates a laonee or traditional Mahratta ballad of Alee Beg’s own composition. What matters most, however, is not the detail of the borrowing but the ironic reversal of its central motif. Lalun. helpless and self-sacrificing in the Mahratta story, is cunning and in control of events in Kipling’s tale: her knowledge of ‘the heart of the City’ and the affairs of state resembles that of Mrs Hauksbee; her singing signals conspiracy and rebellion to the old nationalist hero imprisoned in the fort; her exploitation of the English narrator is the means by which the prisoner escapes.

But a further irony defeats her purpose: the old man turns out to be as exhausted, as defeated, as Scindia at the end of his flight to Delhi. The narrator’s naivety, is matched by Lalun’s miscalculation, and they are both outdone by Wali Dad, whose ignorance of his own nature is the hinge of the plot. Doubleness (duplicity, ambivalence, racial and sexual dichotomy) rules the story which is the greatest parable of empire in English writing.
[Jan Montefiore notes that “Lalun the Beragun” is on RK’s bookshelves in the study at Bateman’s.]

This story was probably written just after Kipling’s move from Lahore to Allahabad in November 1887. I’ve long been wondering who the supposed Sikh revolutionary whom the narrator unwittingly springs from Fort Amara was modelled on, because the date seemed far too late for it to be from 1857. 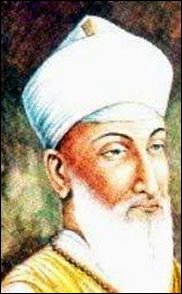 The answer, I have concluded, has to be Baba Ram Singh (left), the founder of the Namdaris or Kukas, a group of radical Sikhs who went over the top in the early 1870s and attacked the Sikh State of Malerkotla, resulting in a paranoid Commissioner of Ludhiana blowing forty-nine of them away with guns.

The key for me is that after the movement had been brutally suppressed in 1872, Ram Singh and a number of his followers were arrested and subsequently imprisoned in the Andamans. Various attempts were made to contact the Russians by his followers, who also tried unsuccessfully to help him escape, leading to rumours that he would return to lead the Sikhs to victory over the British. Ram Singh’s reported death in jail in 1885 took place while Kipling was still in living in Lahore. It would be interesting to see if RK or anyone else wrote about it in the CMG.

See ‘The City of the Two Creeds written for the CMG in October 1887, which reports on the Mohurrum festival in Lahore.
See also “The City of
Dreadful Night” (Life’s Handicap) for Kipling’s graphic description of the city at night, and Chapter 6 of From Sea to Sea (Vol. II), for his tours of the back streets and brothels of Calcutta, under the same title.

Jan Morris (Stones of Empire) has a street-plan of Lahore on p.204 which shows the city as a classic example of the cantonment and fortified railway-station at some distance from the old city, as the British practice of the day dictated.

A contemporary review of this volume (unsigned, but stated to be by Andrew Lang) in the Saturday Review of 10 August 1889 quoted at page 45 of Kipling, the Critical Heritage (ed. R L Green , calls this: the last, and certainly one of the very best, of the stories.

In his Forward to the R.S.Surtees Society Reprint of In Black and White (1987) Philip Mason says:

…“On the City Wall,” the most ambitious and the longest, is an example of one of Kipling’s favourite devices, ‘the marginally involved spectator’ who recounts the events of the tale as they came to him at the time, when he did not always fully understand what was going on. This Narrator, the “I” person, is by no means always the historical Kipling, though no doubt he is someone Kipling would have liked to be thought to be…

Kipling believes passionately that India will always be India; he thinks the old gods of India will always win in the end. It is with the old gods that Kipling’s heart really lies, though his head accepts the benefits of British rule. “On the City Wall “ can be looked on as a rehearsal for “The Bridge-Builders”, (The Day’s Work) published ten years later, a story reckoned by some critics as among Kipling’s most important because it exposes this conflict between head and heart over imperial rule.

Michael Edwardes, in his Everyday Life in Early India [Batsford / Putnam’s Sons. 1969] pp.99-100, makes a point about the status of Lalun:

… the courtesan – who supplied not only sexual satisfaction but artistic and intellectual accomplishment as well – was quite another matter. [from the common prostitute] Her education was wide. Apart from the techniques of her profession, she was – according to the authorities on erotics –adept at “the sixty-four arts”. This formidable list included such obvious arts as dancing, making music and singing, as well as the desirable qualifications of cooking, dressmaking, and embroidery…. Prostitutes of all ranks were often agents of the secret police…. brothels were excellent places for spies to collect information. (See page 328, lines 20 ff. and 329, lines 13ff. below)

Philip Mallett (p.39) describes this as: the most successful of the stories in “In Black and White”. This is unusual in dealing with the Indian middle class, and with it a different kind of challenge to British supremacy than that faced in 1857.

See also the excellent Appendices and Notes in Rudyard Kipling, A Critical Edition of the Major Works, ed. Daniel Karlin, who calls this story: the greatest parable of empire in English writing. (p.544). Also an interesting analysis by Shamsul Islam in his Kipling’s Law (p. 65). There is a Foreward to Dr Islam’s book by Dr. J.M.S. Tompkins in which she comments that this study: fills a gap in Kipling studies with honourable and intelligent work. J M S Tompkins also reminds us that the Narrator is not always Kipling (p. xiv).