Published in the Civil and Military Gazette for 29th March 1883, as a reprint of an item in the Saturday Evening Englishman, signed ‘The Other Player’. This was the first poem by Kipling known to have appeared in the CMG.

It is included in Scrapbook 1. For details of the Scrapbooks see Rutherford p. 31. 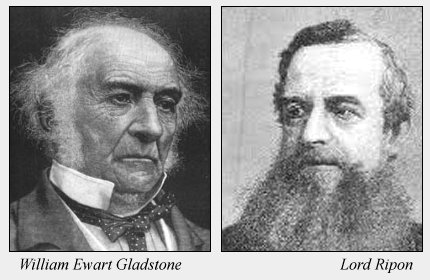 Lord Ripon, who had been appointed Viceroy in 1880 by Mr Gladstone, the Liberal Prime Minister in London, had pursued a determinedly pro-Indian policy which offended much of Anglo-Indian opinion. Thomas Pinney writes (p. 2247):

Under Lord Ripon’s administration a bill to allow up-country native judges to try British subjects (The ‘Amendment to the Criminal Procedures Code’, known as the Ilbert Bill, after C. P. Ilbert, the Legal Member of Council) was introduced in February 1883. The storm of opposition it provoked was still raging when Ripon left Calcutta for Simla in late March – the ‘New Departure’.

Opposition was intense and prolonged: it was particularly violent in Calcutta, among the expatriate commercial community, but feeling ran high throughout Anglo India. Particular objections were urged to the subjection of Englishwomen to the jurisdiction of Hindus or Muslims, because of the low position according to women in their societies; and also to the miscarriages of justice likely to occur in cases involving planters in outlying areas, in disputes arising from labour relations. The heart of the matter was, however, Anglo-Indian distrust, twenty-five years after the suppression of the ‘Mutiny’, of what was seen as an erosion of British hegemony.

Kipling refers to the Ilbert Bill in Something of Myself (pp. 50/51):

Our paper, like most of the European Press, began with stern disapproval of the measure, and, I fancy, published much comment and correspondence which would now be called ‘disloyal.’

One evening, while putting the paper to bed, I looked as usual over the leader. It was the sort of false-balanced, semi-judicial stuff that some English journals wrote about the Indian White Paper from 1932 to ’34, and like them it furnished a barely disguised exposition of the Government’s high ideals. In after-life one got to know that touch better, but it astonished me at the time, and I asked my Chief what it all meant. He replied, as I should have done in his place; ‘None of your dam’ business,’ and, being married, went to his home. I repaired to the Club which, remember, was the whole of my outside world.

As I entered the long, shabby dining-room where we all sat at one table, everyone hissed. I was innocent enough to ask; ‘What’s the joke? Who are they hissing?’ ‘You,’ said the man at my side. ‘Your dam’ rag has ratted over the Bill.’

It is not pleasant to sit still when one is twenty while all your universe hisses you. Then uprose a Captain, our Adjutant of Volunteers, and said: ‘Stop that! The boy’s only doing what he’s paid to do.’

This was, of course, written over fifty years later in the last year of Kipling’s life, but the memory was clearly keenly felt. In fact in March 1883 he was only just seventeen. The CMG Press had the government printing-contract, and it must have been made clear to Wheeler by his proprietors that his editorial line had to be supportive to the Bill, despite the views of his readers. It is interesting that Wheeler later published Kipling’s savagely critical little poem, though as Pinney points out (p. 2247) he made a disclaimer: ‘In publishing this poem the CMG states that it is reprinted from the Saturday Evening Englishman.’ We don’t know how and when Kipling got it published in the Englishman.

bustees ‘in Calcutta, the separate groups of huts in the humbler native quarters, the sanitary state of which has often been held up to reprobation.’ (Hobson-Jobson).

sorrowing City of Drains Rutherford notes that the sanitation of Calcutta as a whole was a recurrent matter of complaint. In Letters of Marque Kipling was later to complain of ‘The Great Calcutta Stink.’

A.C.P.C. Amendment to the Criminal Procedure Code. The Ilbert Bill.

ma-bap From the Hindi phrase ‘Ap ma-bap hai khudawand’ (‘You, my Lord, are my mother and father’), an expression used by Indians begging release from a penalty or reluctant to obey an order (Hobson-Jobson). Hence ‘ingratiating’, and used by Kipling contemptuously, as any Anglo-Indian reader would know.