[Heading] This is a parody by Kipling of “The Exile of Erin”, a tragic street ballad of five eight-line verses usually attributed to Thomas Campbell (1777-1844). The first line is Campbell, the rest presumably Kipling, but it does not appear to be collected. [The ‘poor exile’ obviously makes his mark in American politics very quickly – a comment on the infamous Tammany Hall in New York; Ed.]

[Page 278, line 15] Sutlej one of the five rivers of the Punjab. It rises in Western Tibet.

[Page 278, line 17] railway-ties Kipling uses the American term for ‘railway-sleepers’ – timbers to which the rails are attached.

[Page 278, line 19] ringstraked marked with bands of colour round the body.

[Page 279, line 19] Donga Pa also mentioned in “Through the Fire” later in this volume but not identified.

[Page 280, lines 30 onwards and overleaf] I bowed etc this flowery language is a parody of dignified conversation that for full effect should be conducted in Persian. 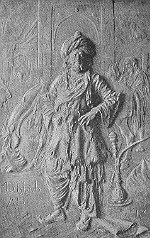 [Page 282, line 23] water-pipe in this context the classic hookah (the spelling varies) illustrated behind the figure of Mahub Ali opposite p. 33 of Kim (right).

[Page 283, line 2] Akbar Jellal-ud-din Mohammed (1542-1605) greatest of the Mogul emperors, renowned for his universal toleration of all creeds and beliefs.

[Page 284, line 5] poppy-fields probably cultivated for the production of opium – see “In an Opium-Factory” (From Sea to Sea, Volume 2) and “The Gate of the Hundred Sorrows” (Plain Tales from the Hills).

As Kipling explains on Page 290, lines 32-33, this is a rendering of the words of an old Irish ballad, “The Wearing of the Green”:

They’re hanging men and women too,
For the wearing of the green.

The ballad is usually attributed to Dionysius Boucicault (1822-1890), Irish dramatist and author, with additions by others. The ‘green’ was the traditional colour of Ireland, and expressed Irish resistance to British rule.

[Page 287, line 9] camera-cloth the cameras of the period were focussed by the operator putting a large velvet cloth over his head and looking at an image on a ground-glass screen on the back of the camera.

[Page 287, line 32] cut off the tail of a cow cattle-maiming was a common occurrence during the Irish campaign for land reform in the nineteenth century.

[Page 289, line 19] Tower musket there was an arsenal at the Tower of London where the Board of Ordnance stored military equipment from about 1400 to 1855. [See the illustrations in “Tiger, Tiger” at pp. 99 and 113 in The Jungle Book where Buldoo’s musket can just be seen, and the Notes to “His Chance in Life” (page 82, line 14) in Plain Tales from the Hills.

[Page 290, line 4] Shun the normal pronunciation of the order ‘Attention!’