Like many other early poems, this was never collected by Kipling, but is to be found in Andrew Rutherford (p. 51), and Pinney p. 1566.

There is a holograph [hand-written by the author] verse letter in the Huntington Library postmarked 9 August 1880, addressed to J. Tavenor Perry Esq.,12 The Terrace, Putney. The address is written within the crown of a hat drawn on the envelope. John Tavenor Perry (1842-1915) was an architect and writer on architectural history, and Pinney notes that RK as a schoolboy stayed with him and his family on several occasions. Rutherford (p. 12) notes that Rudyard saw Mrs Tavenor Perry as ‘a kind of mother-substitute whom he addressed as ‘Mater’ in his letters from school’. Pinney also notes that the MS is not written in Kipling’s usual hand, but was probably altered for a more formal effect.

A light-hearted set of verses. At the time, as the poem notes, “My Hat!” was a (very mild) oath. The four-line verses, with explanatory notes in the margin in an old-fashioned style of English, are reminiscent of the 1817 version, with glosses, of Samuel Taylor Coleridge’s “Rime of the Ancient Mariner.” This may well have been in the Head’s library at USC. 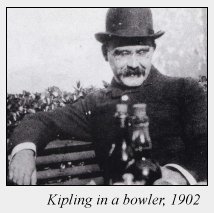 a bowler a hard felt hat with a rounded crown and a narrow curled brim.

matriculate gain entry to a University. It is interesting that the fourteen-year-old Kipling clearly envisaged going on to University after USC. As it turned out he did not stay on at school in the sixth form in order to matriculate, but went out to India to work as a journalist at the age of sixteen. His parents probably could not have afforded for him to go to Oxford or Cambridge, like his cousin Stanley Baldwin. Also they may have wanted their talented and wayward son to be under their eye in Lahore.

go up attend University. Particularly of Oxford and Cambridge.