First published in Mine Own People in the United States of America in 1891 and collected in Life’s Handicap the same year.

The stories in Life’s Handicap are available from Amazon in various paperback editions, and Kindle, as well as on this site.

Moti Guj is a magnificent and powerful elephant, who works clearing forest land for planting coffee. He is owned by a dissipated mahout, Deesa, to whom he is devoted.

One day Deesa asks for leave to go off on a drunken orgy, and the planter allows him ten days off, provided Moti Guj will work while he is away. Deesa tells the elephant that for ten days he must work for Chihun, another mahout, and departs. To the planter’s surprise Moti Guj works well – for ten days. On the eleventh day, however, he refuses to do his daily stint, and wanders around the camp looking for Deesa and generally causing trouble. At dawn the following day Deesa returns, has a joyous reunion with Moti Guj, and – to the planter’s astonishment – they get back to work clearing stumps. 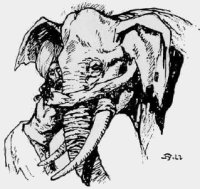 KJ 253/8 has what the Editor called ‘a rather maudlin sketch’ by the French artist H. Deluermoz, showing a larger than life Deesa embracing the elephant.

This is another of the stories which Lionel Johnson believes does not deserve publication (R L Green p. 93.)
Hart (p. 107) points out the importance of the British in India understanding the point of view of the Indians if they are to rule successfully, and including the view of the elephant who will work just as long as his master tells him to and no longer. Hart also refers to the orang-outangs in “Bertran and Bimi” (earlier in this volume) which he sees as significant as anticipating the further variation of points of view in the Jungle Books. 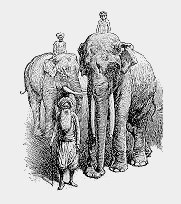 Other stories concerning elephants include “Toomai of the Elephants” and “Her Majesty’s Servants” (The Jungle Book), “Namgay Doola” earlier in this volume, “ Letters of Marque X” (p.82) and “From Sea to Sea III” (p.231) (From Sea to Sea, Vol. 1), “The Killing of Hatim Tai” (From Sea to Sea, Vol. 2 p. 369), “My Lord the Elephant” (Many Inventions), and the verse “Municipal.” See also Chapter IX of Beast and Man in India, by Lockwood Kipling, for illustrations, folk-lore, instructions in management and an outline of this story.