[Page 356, line 13] horse, foot or cart the civilian equivalent of the classic ‘horse, foot and guns’ then used to denote all arms of the military. 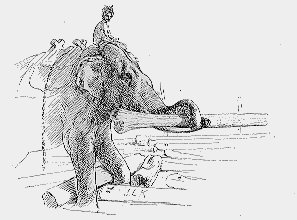 [Page 356, line 21] kicked him behind the ears the mahout sat on the neck of the elephant

First Singer: One coming up with a song in the flush of the glimmering red ?
Second Singer: Love that is born of the deep coming up with the sun from the sea.

[Page 357, line 28] lines in this context, the rows of huts or tents in a camp, here probably the former.

[Page 361, line 361, line 19] Kala Nag an elephant of this name also plays an important part in “Toomai of the Elephants” (The Jungle Book)

[Page 363, line 16] the inalienable rights of elephants to a long ‘nooning’ a meal or rest at mid-day. Kipling was never very sympathetic to those who insisted on their ‘rights’. ‘Boney’, the trades union agitator horse in “A Walking Delegate” in The Day’s Work, p. 60, speaks of their ‘inalienable rights
to eight quarts of oats a day’.

[Page 364, line 8] elephant-language See Chapter IX of Beast and |Man in India by Lockwood Kipling for further information on the belief that elephants came from the furthest East, as some of the words of command are Chinese or Burmese.

The Karens are renowned as as Burma’s master elephant handlers… even elephants kept by ethnic Burmans learn commands in the Karen tongue.

Some two million Karens live in Burma which has been known as Myanmar since 1989.