This poem was published in the Civil and Military Gazette, on 9 June 1887, with a heading:

The poem is unsigned, but authenticated by inclusion in Kipling’s Scrapbook 3 of his own press cuttings in the Kipling Papers at the University of Sussex Special Collections.

There have been notable past performances, and talented actors who have won fame. But will the new generation, hot for praise and panting for cheers, be as good ? Only the audience can decide.

The quotation is from Shakespeare’s Hamlet Act II. scene 2, in which Polonius describes the troupe of actors who have just arrived at Elsinore for the play within a play. The ‘next column’ contained the verse prologue which had been spoken at the opening of the new Gaiety Theatre at Simla the previous week with the comedy Time Will Tell.

Before the rising of the curtain, a prologue in which reference was gracefully made to the past history of the Simla Stage, was delivered by Mrs Deane, one of our favourite actresses. The prologue, written by Major Deane, was very well received , and enthusiastically applauded.

The Empire Queen Victoria was proclaimed Queen-Empress of India in 1876, so the Indian Empire could be said to date from then.

Macready William Charles Macready (1793-1873, another famous actor of the London stage. Here used as a nickname to emphasise Boffkins’ talent.

Boffkins a name invented by Kipling. He liked it and used it again as the name of the unfortunate fiancee in “The Post That Fitted.” Louis Cornell
(p. 85) includes it in a list of Kipling’s ‘ludicrous Dickensian names’. 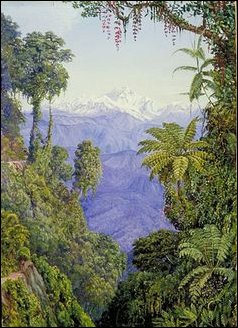 Jakko The hill above Simla. The circuit around it was a popular ride.

Boileaugunge The western area of Simla.

Grundy an upholder of conventional morality, from Thomas Morton’s play Speed the Plough (1798), in which a character frequently asks What will Mrs. Grundy say?

Whose fame See Oliver Wendell Holmes’s ironic attack in Astraea: The Balance of Illusions (1850) on upstart New York critics and the local authors they discover and acclaim:

Titanic pygmies, shining lights obscure…
Whose wide renown beyond their own abode
Extends for miles along the Harlaem road.

Renown ‘for miles along the Harlaem Road’ out of New York City was hardly wide fame.

Kipling quotes the couplet in the form in which it is cited in Bayard Taylor’s The Echo Club and other Literary Diversions (1876), pages of which Rud knew by heart, and which he later claimed spurred him ‘to the joyful labour of writing parodies on every poet between Wordsworth and Whitman.’
(Harry Ricketts p. 63)

Its title may well have inspired the choice of Echoes by Two Writers as the name of Rudyard and Trix’s collection of parodies published in August 1884.