[Page 8, line 3] cock-pit an enclosure where gamecocks were set to fight whilst their owners made bets on the result. Cockfighting was banned in England in 1849. It still exists in various parts of the world. [DP]

[Page 8, line 6] bastioned a bastion is a projecting part of a fortification, such as a tower, set in the curtain wall. [DP]

[Page 8, line 9] Aravalis the range of hills in the west of Rajputana.

[Page 8, line 12] The ‘Thirty-Six Royal Races’ this refers to the Rajput tribes. and is really a subject for experts, particularly as different authorities mention different tribes.
(For details see the attached note on the Royal Races of Rajput)

[Page 8, line 13] Chohan with Rahtor (For details see the Royal Races of Rajput) Chohan was of the “Fire-born” group, ruling from Ajmer and Delhi, whilst Rahtor of the “Children of the Sun” was from the Marwar region of Western Rajputana. [DP] 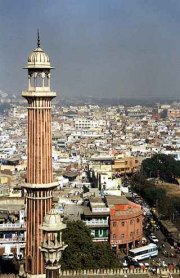 [Page 9, line 3] Abu otherwise Guru Sikhar, a solitary peak near the southern end of the Aravali Hills – over 5,000 feet high: said to be the site of the sacred fire-pit in which some of the Rajput clans were purified. It is about 400 miles south-east of Delhi. 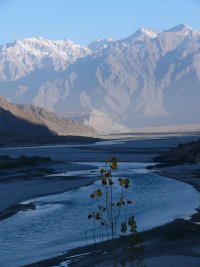 [Page 9, line 4] the Indus this majestic river (right) rises in Tibet and runs for nearly 2000 miles through the Karakoram mountain range and across the subcontinent until it discharges into the Arabian Sea near Karachi. On the way it collects the waters of the Chenab, Ravi, Sutlej, Jhelum, and Beas rivers. [DP]

[Page 9, line 4] the Chambul this river runs northward from near Indore in Central India for 200 miles, then bends north-east to join the Jumna, that great tributary of the Ganges. In its course the Chambul is from 500 to 700 miles from the Indus. The great areas of India covered by lines 3 and 4 on this page include Sind, Rajputana and parts of the Punjab and Central India.

[Page 9, line 7] Dhola Rae, son of Soora Singh These are both Rajput names. The founder in A.D. 967 of the State of Dhundar, whose ancestors migrated from the traditional home of Kush in the city of Ayadhya on the Gogra river and built a new capital at Rhotas on the left bank of the Son river 100 miles above Patna. They are then thought to have migrated westwards 360 miles to Gwalior, which later became the capital of Sindia, the great leader of the Marathas, to whom James Tod was sent as Agent. It is said that when the father of Dhola Rae died, the child was carried west by his mother, as his uncle had usurped the government.

Kipling records (page 10, line 14) that Dhola Rae founded the city of Amber, though it seems that he actually conquered an existing Meena town of that name which he and his successors built over. Kipling describes his visit to Amber in Chapter III. [DP]
(see the Wikipedia entry). 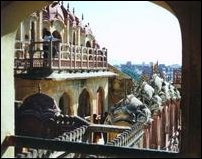 [Page 9, line 15] Jeypore became a feudatory In the early 19th century the Raja asked for British protection from the Mahratta Pindaris and the Pathan freebooters. The Governor-General, Lord Hastings, was willing to execute a treaty but the Raja drew back. About 1840 several officials were killed at the court of Jaipur and the State was then brought under British control.

[Page 9, line 24] a Mahratta The Mahrattas were the southern neighbours of the Rajputs, across the Narmada river, being possibly of Dravidian origin, while the latter are thought to have been later invaders and possibly descendants of the Scythians or ‘White Huns’ who arrived after the Aryans. Mahrattas were mostly dark of skin, short of stature and of low caste. They were feared by Hindus as much as by Moslems and in the 17th century spread both north into the Rajput states and east as far as Delhi, where they put an end to the Moghal emperor Shah Alam. They were ruthless and a formidable enemy of the British until their Pindari raiders were driven back across the Chambal river in 1818. 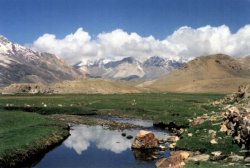 The North-West Provinces Before the annexation of the Punjab in 1849, the responsibilities of the East India Company extended no further to the north-west than the Jumna river. West of the Sutlej, control had been in the hands of Afghan and Sikh rulers. The former did not advance east beyond Lahore and the latter took over that city in 1799; at much the same time part of Oudh was annexed by the East India Company. The attention of the Company was distracted from the ambitions of Ranjit Singh, the Sikh ruler, by the approach of the Russians. In 1809 Shah Shuja, the Afghan King, was driven to take refuge in India. In 1826, Dost Muhammed became King, and in 1835 Amir, at Kabul, hoping also to obtain Peshawar in time.

The death of Ranjit Singh in 1839 and the Afghan and Sikh Wars led to a new situation and the annexation of the Punjab by the British in 1849. The continued misgovernment of Oudh led to its annexation in 1856, which was followed by the “Indian Mutiny” which involved Delhi, Rohilkand, Lucknow, Meerut and Cawnpore. Oudh and Rohilkand. On reorganisation it became the “North-Western Provinces” until 1902, when the title was changed to “The United Provinces”. The North-West Frontier Province had been separated from the Punjab the year before.

[Page 10, line 4] Aurungzeb the last great Moghal emperor, who reigned from 1659 and died in 1707. He wrested India from Shah Jehan his father and from his brothers.

[Page 10, line 5] Solomon so often pictured as the wise man of all time: perhaps without fully adequate reasons, but see the Old Testament stories.

[Page 10, lines 5-6] The Solomon of Rajputana this was the Jey Singh, who persuaded Sivaji to surrender in 1665. He took his captive to Aurungzeb’s court at Agra. Sivaji escaped the following year and Jey Singh died in 1667.

[Page 11, line 21] branded bull The respect shown the bull in modern India is due to his association with Siva. In sacred Hindu cities such as Benares (Varanasi), certain bulls are given the freedom to roam the streets. They are considered to belong to the lord, and they are branded on the flank with the trident insignia of Siva. [DP] 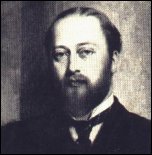 [Page 12, line 14] Champs Élysées a broad straight thoroughfare which runs in the heart of Paris from the Place de la Concorde to the Arc de Triomphe. [DP]

[Page 12, line 28] quail fight a small round partridge-like bird, specially trained for fighting in a pit – after the manner of cock-fighting in Britain.

[Page 12, line 33] cut the cost of . . . the costs of his khaki blouse, brown-leather accoutrements (belt, etc), and jack-boots (knee-high riding boots) were deducted from his pay. [DP]

[Page 13, line 17] Kathiawar (ancient Saurashtra) a peninsula north of Bombay; and Marwarri in Rajputana. Marwar is the junction of the branch line to Jodhpur from the main line joining Ajmir and Ahmedabad. These were two well-known breeds of horses at the time.

In Beast and Man in India, J. Lockwood Kipling (p. 175) describes the breeds: 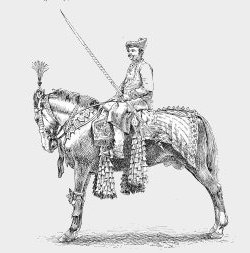 The animals most liked [on State occasions] are the stallions of Marwar (right) or Kathiawar. White horses with pink points, and leopard spotted beasts are much admired, especially when they have pink Roman noses and light coloured eyes with an uncanny expression. Their crippled, highly arched necks, curby hocks, rocking gait, and paralytic prancing often proclaim them as triumphs of training. 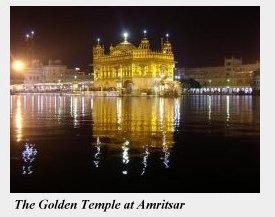 [Page 13, line 20] Amritsar the famous city with the Golden Temple of the Sikhs (left) in the Punjab.

[Page 13, line 25] Hissar another railway junction nearly 100 miles west-north-west of Delhi on the line running north from Jodhpur to Ferozepur in the Punjab.

[Page 13, lines 28-29] Government and Sirkar here both mean the British administration of India under the Crown, and previously, the East India Company.

[Page 14, line 8] These stables or those at Jodhpur were the ones Kipling had in mind when he wrote about the Maharajah’s horses in the novel The Naulahka.

[Page 14, lines 14-15] the pickets are of white marble rather than wood or iron, to which the horses could be tied. A picket is usually a peg in the ground to which an animal is tethered when in the field. See also “My Lord the Elephant” (Many Inventions) or “Toomai of the Elephants” (The Jungle Book) for example. [DP]

[Page 14, lines 15-16] the heel ropes . . . of good sound rope instead of poor quality material. Heel ropes were tied to the back legs of an animal to hobble it. It is not clear why heel ropes should be used for stabled horses. See also “Her Majesty’s Servants” (The Jungle Book) .[DP]

[Page 15, line 1] Six seers a seer is usually two pounds (avoirdupois): but in various parts of India it varies – from 3 lbs. down to 8 oz. only.
Gram is the same as chick peas, nutritious food for animals doing hard work.

[Page 15, line 15] ‘monkey-jump’ possibly a jump with all four feet together.

In Beast and Man in India, J. Lockwood Kipling on p. 171-172 describes a springing or bounding action that may be to what this refers [DP]:

Elaborately-ordered curvettings, side movements like those of Western riding-schools, and progress by slow springs or bounds, are also practised. From old pictures it is evident that the last was an admired action of the European manège.

[Page 15, line 20] Tartarin of Tarascon Tartarin was the hero of a novel by Alphonse Daudet (1840-1897). The town of Tarascon is about 12 miles south-west of Avignon in the Bouches du Rhone Department of Southern France. (See also Chapter V, page 35, line 23).

If you go to the house of an Indian gentleman now, he does not say, “Bring more curricles,” like the famous Nabob of Stanstead Park.

Then in Chapter LII:

“A few of the Indians were in society in my time, my dear,” says Lady
Kew, musingly. “My father has often talked to me about Barwell of
Stanstead, and his house in St. James’s Square; the man who ordered more
curricles when there were not carriages enough for his guests.”

The original remark has been attributed to Richard Barwell (1741-1804), an East India Company employee and friend of Warren Hastings (1732-1818), who bought Stansted House in west Sussex in 1781. 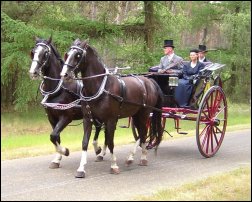 A curricle was a smart light two wheeled “chariot” large enough for the driver and a passenger drawn by a carefully-matched pair of horses. [DP]