[Page 106, line 13] jaghirdar the regional governor of a village or district to whom has been granted the revenues of that district by the Emperor, usually in payment for some service such as the maintenance of a troop of soldiers. [DP]

The reference here is to the way in which he obtained Naboth’s vineyard – by bringing a false accusation against him for which Naboth was stoned to death (I Kings 21).

[Page 108, line 8] Jhaswara has not been found on any map or any gazetteer. It may be fictional, but it seems strange that all other places mentioned are factual. [DP]

[Page 108, line 14] Bikanir or Bikaner. The principal city of Bikaner State on the edge of the Indian Desert, north of Ajmir and west of Delhi. [DP]

[Page 108, line 17] Palitana a town in Kathiawar, Guzerat, about 400 miles south of Ajmir and across the Gulf of Cambay from Broach.

[Page 108, line 26] Ajmir, the Crewe of Rajputana like Crewe in the county of Cheshire, in north-west England, Ajmir was a great railway centre with railway engine-building works.

[Page 108, line 29] North-west so Kipling being in Chitor and his stick indicating that he should travel N.W., he decided to go to Jodhpur – ‘100 miles for anything that flies direct but much more than that by road and rail’.

[Page 108, line 31] Houyhnhnms (pronounced whinims or whinhims), a race of horses with the finer characteristics of men, introduced by Swift in Gulliver’s Travels with satirical effect. The name, invented by the author, is intended to imitate the whinny of a horse.

[Page 108, line 32] Jodhpur the State south of Bikanir and north-west of Udaipur; it is on the edge of the desert and about 100 miles west of Ajmir. The tight-fitting riding breeches are named after this city.

[Page 109, line 2] Gentlemen in the Ordnance or the Commissariat at this time this meant men of the standing of Warrant Officers in the British Services, but the organisation was quite different in the Supply and Transport Services.

[Page 109, line 10] a Political’s august head A ‘Political’ was a Resident or a senior member of his staff.

[Page 109, line 13] loafers people without gainful employment who drift from place to place, usually looking for sources of free drink. In this instance, the loafers have a particular knowledge and interest in horses. A more detailed description can be found on pages 118 & 119. See also “The Man who would be King”. [DP]

[Page 109, line 17] Yahoo Swift’s name in Gulliver’s Travels (Book IV) for human beings in the land of the Houyhnhnms, where the horses were the rulers and men the bestial servants.

[Page 109, line 19] Uhlans German Lancers, here implying the ‘light cavalry’ of commerce, to whom the distance travelled is the prime factor towards sales.

[Page 109, line 20] bagmen another name for commercial travellers, or those attempting to collect the money for goods which had been supplied. [DP]

[Page 110, line 32] ’all the King’s horses and all the King’s men’ a quotation from the nursery rhyme “Humpty Dumpty” from 1785 which, however, was known from antiquity as a riddle.

[Page 111, line 18] Hyderabad-Pachpadra also spelled Haidarabad or Hydrabad. This does not refer to the great native State of the name in South India, but to the district and large town in Sind along the Indus River towards its mouth. (There are other places of this name in India and Pakistan.) Pachpadra is about 250 miles to the east of Hyderabad, Sind.

O up and spake an eldern knight,
Sat at the King’s right knee—

[Page 112, line 8] Nagore more usually now Nagaur or Nagar. It is on the branch line from Merta Road to Bikanir, heading north from what became the Jodhpur-Merta-Jeypore line, which passes Makrana and Sambhar.
See this web-site for an 1893 map of the area, including the railway lines. [DP]

[Page 112, line 9] Makrana from Jodhpur to Bahawulpur was about 250 miles, or twice the distance to Bikanir or Makrana. Many new lines were planned at the time and an 1895 map shows railways from Jodhpur to Jaipur (Jeypore) and one from Hyderabad towards Pachpadra as having reached Umarkot – 100 miles or so.

The Sambhar Lake was one of the main sources of salt in India, on which there was a monopoly, initially of the Indian Royal States, then by the East India Company and finally by the Government of the Raj. It became a significant source of revenue from taxation and duties levied by successive Governments. 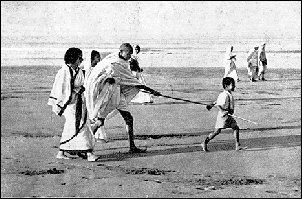 The Salt Tax made it illegal for Indians to freely collect their own salt from the coasts of India, making them buy salt they couldn’t really afford. Since salt is necessary in everyone’s daily diet, everyone in India was affected. In 1930, as part of the Congress campaign to free India from British rule, Mahatma Gandhi led a march to the sea to gather salt illegally, as a protest against the tax.

For more detail on the tax see this note on the Indian Salt Tax. [DP]

[Page 113, line 24] Gworlior the speaker is mispronouncing the name of Gwalior, a city about 140 miles ESE of Jeypore, in the State of Gwalior. [DP]

[Page 114, line 19] Doré’s illustrations of the Contes Drolatiques Gustave Doré (1832-1883), was one of the leading 19th century illustrators, of international fame. His style was titanic, and slightly macabre. He illustrated Balzac’s Contes Drolatiques in 1855, and is best known for his illustrations to Dante’s Inferno (1861), Don Quixote (1863), Paradise Lost (1866) and the works of Rabelais (1873), among many others. He also made a number of remarkable engravings of Victorian London.

[Page 114, line 27] sowarri fast riding camels, not for load carrying like the shag-haired trading ‘ships of the desert’.

[Page 116, line 33] ‘sweeper nonsense’ sweepers (mehtars, banghi, or scavengers) were the ‘untouchables’ who cleaned latrines, etc. and were at the lowest level of the caste system.[DP]

[Page 118, line 8] Hyderabad this is not the place of that name in Sind which we have been thinking about during the above few pages, but the great native State then under the rule of the Nizam in Southern India.

[Page 118, line 11] Doomsday Book of Calcutta ‘Domesday Book’ was the great land record of the Kiingdom of England for taxing purposes, prepared in 1086 A.D. for William the Conqueror. Kipling is comparing it to the contemporary ongoing business record of doubtful credit risks in India.

[Page 118, line 33] sack breeches this could be a shortened form of ‘sackcloth breeches’ made from (Indian) hemp which would have been very cheap, though probably uncomfortable to wear. [DP]

[Page 119, line 11] store-coffin a ready-made coffin rather than one tailored to fit. [DP]

[Page 119, line 29] succession-cases where and when a man might have several wives there are bound to be such queries about the succession on his death.