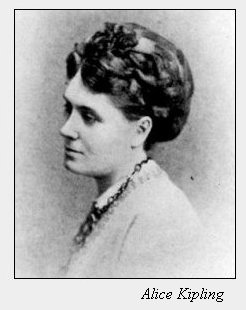 The first publication of this poem was in Schoolboy Lyrics, as a prelude to the collection, which was published in Lahore in 1881 (when Kipling was fifteen) in an edition of around fifty. Rudyard, anxious for critical responses to his writing, had regularly sent poems to his mother, as well as to other friends whose judgement he respected, including his mother’s sister, Edith Macdonald, and a close family friend, Edith Plowden.

In 1881 Alice Kipling conceived the idea of publishing some of these poems, made her selection of twenty three of them, including this one as an introduction, and had them printed for private circulation at the press of the Civil and Military Gazette, the newspaper for which Rudyard was to work.When he arrived in Lahore the following October, he was far from pleased that the poems had been published without his knowledge. (See Andrew Lycett pp. 85-6).

However, when the Outward Bound and de Luxe editions of his works were published in 1900, he included the Schoolboy Lyrics, adding a further nine poems under that heading, together with other Early Verse.. The poem is listed in ORG as No 24.

It was later collected in:

The young Kipling reflects on the fate of a would-be writer who cannot make his voice heard, or find original thoughts to express.

After his unhappy years at Southsea, Kipling was sent to United Services College at Westward Ho! in Devon at the age of twelve, in 1878. Because of his poor eyesight he was no good at games, and the Head, Cormell Price, gave him the freedom of his library, where he read voraciously. (See Stalky & Co. pp. 217-8.) He was soon writing himself, experimenting with styles and language and themes, borrowing from many other writers, finding his voice, determined to become a published poet. ‘After my second year at school, the tide of writing set in.’
(Something of Myself p. 33.)

See Ann Weygandt for the influence of Kipling’s reading on his verse.