First published in the Civil and Military Gazette, May 26th 1886.

The poem was published on 26 May 1886, two days after the event it describes, and shortly before the publication of the first and second editions of Departmental Ditties and Other Verses in June and September of that year. In CMG it was entitled “A Levéety in the Plains”, to pun with ‘levity’. Rutherford (pp. 231-22) notes that in CMG it followed a contrasting poem published five days before, “Distress in the Himalayas”, and that in the original version the fifth verse begins: ‘The whole Punjab there, in sumshus garb were / Paradin’ ‘

It did not appear in the later editions of that collection in India or Britain. It was included—as an Other Verse—in the ‘Early Verse’ volumes of the Outward Bound Edition and the Edition de Luxe, but not in other collections until Sussex and Burwash.

The poem describes Queen Victoria’s Birthday Levée at Government House in Lahore on May 24th 1886, from the viewpoint of an Irish soldier who witnessed that occasion. He gives a lively account of the scene, the music, the punkahs to dispel some of the heat of a May evening, the officers British and Indian in full-dress uniform, the judges, the sweating civilians, and a final drink under the stars for the soldiers who had been on duty.

Despite the total contrast in theme and mood. this editor notices a faint echo here of the cadences of the old lament for the Scottish dead at Flodden Field in 1513, “The Flowers of the Forest”:

I’ve heard the lilting, at the yowe-milking,
Lassies a-lilting before dawn o’ day…

May 24th 1886 was Queen Victoria’s sixty-seventh birthday, and this would have been one of many such celebrations in British India, and indeed around the woorld-wide British Empire. One assumes that the young Kipling was there to observe a splendid turnout of the military and civilian establishment of the Punjab. The host would have been Sir Charles Aitchison (‘our great Sorr Charles’) the Lieutenant-Governor of the Punjab.

Kipling and the soldiers 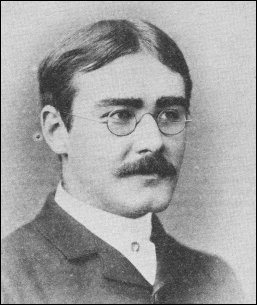 Although Kipling had been working in India for over three years, and writing poetry since his early ‘teens, he was still only twenty.

He wrote many verses for the CMG and the Pioneer—some under his own name, some over a pseudonym or unsigned—experimenting, trying out different styles and forms and rhythms, drawing on his extraordinary memory to echo earlier poets, Old Testament language, the slang of the club, and the mess and the drawing room, and the speech of the many different people he encountered out and about.

He would have met many British army officers socially, but over the past year, as Charles Allen describes (pp. 220-222) he had encountered men from the ranks for the first time. He was introduced by Colour Sergeant Fraser of the Second Battalion of the Royal Northumberland Fusiliers to a group of “boozing chums” in the canteen, from ‘H’ Company, led by ‘a garrulous hard-bitten Irish Corporal MacNamara’, who Fraser later claimed to be the original of Mulvaney.

Kipling also, as Allen recounts, reviewed Nathaniel Bancroft’s From Recruit to Staff Sergeant, in which Bancroft transliterated the ‘thick spoken brogue of the Irish onto the printed page’, as Kipling sought to do in this poem. So although Charles Allen describes it as ‘one of the most forgettable of his verses’, it can be seen as a precursor of a rich vein of work, in the stories of the ‘Soldiers Three’, and the Barrack Room Ballads.

Lasses of swate Parnassis In ancient Greek myth, Mount Parnassus, above Delphi, was the home of the nine muses, the goddesses of literature, science and the arts, the source of the knowledge contained in poetic lyrics and myths.

Lahore the capital city of the Punjab, Kipling’s base for five years from October 1882, and the scene of many of his tales.

Our great Sorr Charles Sir Charles Umpherstone Aitchison (1832-1896). pictured above, a distinguished member of the Indian Civil Service, who was Lieutenant-Governor of the Punjab at this time. He was later appointed by the Viceroy Lord Dufferin as Public Service Commisioner for British India to review the entry system for the I.C.S.

the native ginthry The native gentry, distinguished and high-ranking Indians.

the bowld civilians The bold civilians. ‘Civilians’ as opposed to military men, officials.

stand-up collars that lay down flat starched white ‘wing’ collars that had collapsed in the heat. The temperature at that time of year in Lahore could well have been over 30 degrees celsius when the proceedings opened at 10.15 pm.

For stifling nights in the Indian summer-time see “The City of Dreadful Night, and “With the Main Guard”.

Thin spurs were scratchin’ an’ sword-belts catchin’ Swords were worm with full dress uniform for army officers, and cavalry officers also wore spurs on their boots. Both would have been hard to manage neatly in a crush of guests.

as they lat the batch in at ten-fiftane Those attending the Levée were evidently admitted by the solders on duty in groups (batches), in order of rank, to be greeted by the Lieutenant-Governor.