ORG Volume 5, page 2486 records the first appearence of this story in the United States in Harper’s Weekly for 25 April, 1891 and in the United Kingdom in the Ludgate Monthly for May the same year. It was headed by “Old Ballad” (ORG Verse No. 496) one of two other items so entitled.

Flora Livingston records a pirate edition of Plain Tales from the Hills published by R. F. Fenno & Co., New York in 1899 which included this item. Kipling sued them for infringement of copyright. It is also contained in a limited edition de luxe of one thousand numbered sets of Plain Tales for subscribers only, published by Chas. A. Lind & Co., Boston and New York. It was reprinted in KJ 129/05 without the verse.

Kipling explains how thinly spread were the administrators of the Indian Civil Service, the I.C.S. The I.C.S. was an elite service, staffed by men sent out from Britain to govern the Provinces and Districts of the Indian Empire under conditions of extreme stress. Only those who understood that the work must come before all else met the necessary standard. The chain was only as strong as its weakest link.

Circumstances, or as Kipling put it, ‘the gods’, imposed extra strains through famine and disease, and in the hot seaon the death toll among the administrators, from fever and heatstroke and sheer overwork, was fearful. In this story young Haydon holds out for eleven months until his leave is due, and goes up to Simla, the summer capital, for rest, relief from the heat of the plains, and some much needed social relaxation. But after a month his successor dies, and he is told he must go back to his post, at once. He sets off, angry and afraid, but that night, in the heat of Umballa station, he falls under a train to his death. We are not told so explicitly, but the strong implication is that he has committed suicide rather than return to his work.

J M S Tompkins quotes this piece in her Chapter 7, “Man and the Abyss” (page 188) where she discusses the various aspects of death in India compared with the United Kingdom, glancing at “The Song of the Dead” in “The Song of the English”, which commemorates British people who were killed on land and sea in the service of Sovereign and Empire.

The supreme government in India was headed by the Viceroy and Governor-General in Council, with, below, the various Lieutenant-Governors of Provinces, Presidencies etc. The Viceroy reoprted to the secretary of State for India, who was a senior member of the Cabinet, and answered to Parliament on Indian matters,

In India the British jurisdiction was divided into some two hundred and sixty Districts headed by Collectors or Deputy Commissioners who are the men mentioned in this story. The I.C.S. was a small, elite, and highly prestigious service, staffed by men from the United Kingdom who had succeeded in highly competitice examinations. As a career it ranked with the Dimplomatic Service, and the major Departments of State, like the Treasury.

For a simplified account of the Viceroy in Council, see “Tods’ Amendment” (Plain Tales from the Hills) and, for the military chain of command, “Her Majesty’s Servants” (The Jungle Book).

[Heading] In this context a relief is one who takes over the duties of another on the change of watch in a ship or, as in this instance, on the death of another.

food for fever young men from the United Kingdom with no inoculations and thus vulnerable to unfamiliar diseases. See Dr Sheehan’s Notes. Also Something of Myself, page 41: ‘boys …died from typhoid mostly at the regulation age of twenty-two.’

far less importance than their work an echo of Kipling’s verse “A Song in Storm” (1915):

the gods Random circumstances, which could readily catch the most experienced adminnistrators by surprise. In Greek mythology, Zeus and the other gods sitting on Mount Olympus frequently interfered unexpectedly in human affairs, especially when they felt that men were growing over-confident.

famines Farmers in India, using traditional methods, and burning their animals’ dung rather than spreading it on the land, were heavily dependent on the rains, and if the monsoon failed famine was always a danger. See Alastair Wilson’s notes on “William the Conqueror” (The Day’s Work) and Beast and Man in India by Lockwood Kipling, Chapter 6.

sanitaria hospitals and convascent homes at the hill-stations – see “Garm – a Hostage” (Actions and Reactions). 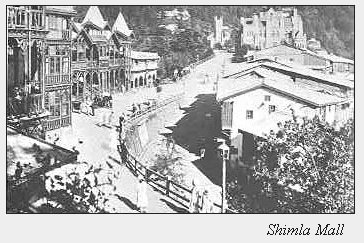 Simla now known as Shimla: capital of Himachal Pradesh, and the summer capital of the British Raj in India from 1864 until the government moved to New Delhi in 1931.

Shimla is now a popular tourist resort in the north-west Himalayas at nearly 7000 ft (2,130 metres), the city is surrounded by forests of pine, rhododendron, and oak, with pleasant summers and cold winters.

Connected to Kalka by one of the longest narrow gauge railways in India, Shimla is just over 70 miles (115 km) from Chandigarh, the nearest major city, and some 230 miles (365 km) from New Delhi now the national capital. Kipling was very happy there and the town is the scene of a good proportion of his Indian prose and verse. See”A Tale of Two Cities” :

…Still, for rule administration, and the rest,
Simla’s best.

See “One Viceroy Resigns” in Plain Tales from ghe Hills and other Indian stories, and the Lonely Planet guide to India, 1987 p. 131.

Myndonie not identified; also referred to in “The Head of the District”, Life’s Handicap, page 120, line 4.

Brompton flat an apartment in a pleasant area of London, SW3. The young Kipling and his sister stayed with their mother in lodgings at 227 Brompton Road in 1877 (Something of Myself, page 18) a mile or so from “The Grange” in Fulham where he used to stay with his much loved Aunt ‘Georgy’ Burne-Jones.

Moonee not traced as an Indian place-name, though we have found a suburb of Melbourne Australia of that name.

Halimpur a town in Bengal, in present-day Bangladesh.

general post in this context a redeployment of personnel, from the parlour game where players sit in a circle and change places as the game progresses..

larks fun and games – good jokes; not often heard in this context today.

ducks in this context clothing made of a light cotton or linen cloth. 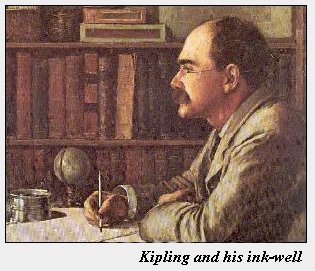 blotting-paper an absorbent paper used for ‘blotting’ or drying the ink in the days when – as Kipling did – people wrote with a pen with a steel nib which was dipped into an ink-well.

See Something of Myself, page 229.

the Mall the main street and social hub of a Station or Cantonement.

Hara-Kiri Japanese ritual suicide. As indicated in Hobson-Jobson, at that time in Japan an accused person could elect to commit ritual suicide in lieu of proceedings in court, in which case he received skilled assistance in carrying out the act.

Gazette in this context the official government publication with details of appointments, promotions etc.

heat haze the warm air rises to produce a shimmering effect similar to a mirage.

Kalka the railhead for Simla before the narrow-gauge railway was opened in 1903.

Umballa, city in the Punjab, 150 m. NW. of Delhi; an important military station and railway centre. It is mentioned in many of Kipling’s stories, including Kim.

badly trimmed lamps the charred remains of the cotton wicks of paraffin (kerosene) lamps must be cut level to prevent them from smoking.

monsoons from the Arabic mausim, meaning ‘season’, the winds which blow at fairly regular times of the year, bringing much-needed rain, and a respite from the dreadful heat of the Plains.

lamp a portable paraffin lamp probably similar to those illustrated on the back cover of Mrs. Hauksbee & Co,ed. John Whitehead, (Hearthstone Publications, 1998)

panther a member of the cat family, Panthera pardus, also known as a leopard, found in Africa and Asia. The black panther named ‘Bagheera’ plays an important part in the Mowgli stories in the Jungle Books.

up mail 42 the train from Kalka to Umballa.

death rattle Dr. Gillian Sheehan writes: ‘…the gurgling noise due to the collection of secretions in the throat of a dying person who is unable to swallow or expectorate.’