Like “The Ballad of the King’s Jest”, this is a tale of irony and savage cruelty. The “jest” brings about the unnecessary death of a foolish young man, and the “mercy” here is permitting a would-be assassin to die after he has suffered dreadful torture. See the Headnote to “The Ballad of the King’s Jest” for background provided by Cornell and others, together with information on Abdhur Rahman Khan.

A man from India strikes a Yusufzai (the spelling varies), one of the largest Pashtun tribes in the North West Frontier Province and is about to be summarily executed by the Governor of Kabul. It happens that the King is passing by, and when the man appeals to him for mercy, the Captain of the Bodyguard is ordered, in somewhat demeaning terms, to kill him. The Captain resents this and is mocked in the city for the deed. The same night he attempts to kill the king, who overpowers him. The King orders him to be stoned, but not killed. After three days of torture, the King is merciful, and permits him to die.

In … November 1889, the first of two long ballads were acceted by Mowbray Morris, the Editor of Macmillan’s Magazine. It was typical of Kipling that his first step in starting a new career, in a new country, should be under a new name: he would not derive adventitious support from a reputation earned elsewhere. Accordingly, the poem appeared in Macmillan’s under the pseudonym “Yussuf.”

The first of these two, “The Ballad of he King’s Mercy” has never been regarded as one of his major works; the second of them, “The Ballad of East and West”, which followed in the December issue, at once raised its author into the first rank of contemporary writers. No one ever seems to have doubted that it was written by Kipling. George Saintsbury selected it as one of two examples of contemporary verse worth mentioning by name in his

; and down at Farringford, the aged Tennyson growled to a friend that young Kipling was ‘the only one with the divine fire’.

Andrew Lycett sees Kipling as being respectful, rather than critical, of Abdur Rahman’s brutal regime (p.197):

Rudyard wrote the rollicking “Ballad of the King’s Mercy” which—to confuse anyone who finds his ‘imperialisem’easy to interpret—is studiously respectful of the brutal workings of royal Afghan justice in the Khyber hills. Still wary of putting his head too far above ghe parapet, he signed his poem with the pseudonym ‘Yussuf—not that many readers were deceived, given the subject matter.

But was there an element of sarcasm in his apparently respectful tone ?
Philip Mallett (p. 61), looking at Barrack-Room Ballads generally in his Chapter 3, “The Conquest of London”, writes:

The impetus … came from the music-hall. In the 1860s and 1870s the theatre-going public had divided along increasingly sharp lines. New theatres were built to suit the taste of the middle-class with decorous orchestral (sic) stalls replacing the unruly pit of an earlier period. Inevitably the new levels of comfort led to higher charges. Priced out of the legitimate theatre the lower classes were left to find their entertainment in the music-halls. At the height of their popularity during Kipling’s years in London … Gatti’s, one of the best-known halls, was a few steps from Kipling’s rooms in Villiers Street, and he soon found he preferred the smoke and the roar, and the good fellowship, to dinner with the intelligencia. [Something of Myself, p. 49].
But there was more at issue than his impatience with literary society. The music-hall introduced him to performers whose success was based on an easy rapport with their public. In the give-and-take atmosphere of the halls, Kipling began to imagine a way in which the artist might speak for as well to the audience.

See our notes on “The Ballad of the King’s Jest” for some coomments from Angus Wilson.

[Line 1] Abdhur Rahman Emir of Afghanistan Abdur Rahman Khan (the spelling varies) c. 1842-1901), Emir of Afghanistan from 1880 to 1901, was the. third son of Afzul Khan, and grandson of Dost Mohammad Khan. He was considered to be a strong ruler, who re-established the writ of the Afghan government in Kabul after the second Anglo-Afghan war (1878-1881). See also “The Ballad of the King’s Jest”.

Durani (the spelling varies) the chief Pashtun tribal confederation in Afghanistan and what is now Pakistan, dating from around the 1740s, from which the royal family of Afghanistan came.

[Line 4] Balkh an ancient city in northern Afghanistan, now a small town in the province of Balkh, some 46 miles (74 km) south of the Amu Darya River.

Kandahar the second largest city in Afghanistan, capital of Kandahar province, in the south of the country.

Kurd The Kurds, a numerous people, who speak an Iranian language, live in parts of Iran, Iraq, Syria, Turkey and elsewhere. They lack an independent homeland of their own.

Kafir one of the fiercely independent people, with a distinctive culture, language and religion, living in Kafiristan, the historic name of Nuristan, a province in the Hindu Kush region of Afghanistan and Pakistan, before 1896. See “The Man who would be King” (Wee Willie Winkie) in which Daniel Dravot and Peachey Carnehan go to Kafiristan to make themselves kings, but in the end meet their deaths.

[Line 6] Kabul the capital of Afghanistan.

[Line 7] strait in this context limited

[Line 8] the longer purse those with the most money to pay bribes would live longer.

[Line 15] a bastard of the Blood the illegitimate son of a member of the royal family. A dangerous relationship, since one was a potential threat to the King. 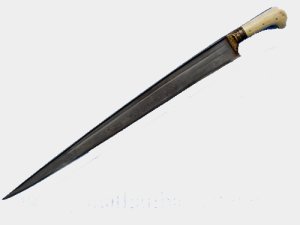 They have taken the Oath of the Brother-in-Blood on fire and fresh-cut sod,
On the hilt and the haft of the Khyber knife, and the Wondrous Names of God.

[Line 24]  A king this dog hath slain  Daniel Hadfas suggests: ‘This is the jest to which Abdur Rahman refers in l. 43. Yar Khan’s lines could be interpreted as either

“you, king Abdur Rahman, have now killed this Kafir, since I have carried out your orders” or

[Line 26] Ghilzai a major Pashtun tribe located mainly in south-eastern Afghanistan, between Kandahar and Kabul, extending towards the Suleiman Mountains into Pakistan. They are the second Pashtun tribal confederation after the Durrani.

[Line 27] Heratis people from Herat, a province of Afghanistan on the north bank of the Hari Rud. (! Ed.)

[Line 28] Abazai a town in Charsadda District of Khyber Pakhtunkhwa province of Pakistan 24 miles
(some 40 km.) north of the provincial capital Peshawar on the left bank of the Swat river. The town is mentioned in “The Lament of the Border Cattle-Thief” Verse 9:

[Line 29] the watch was set the watchmen that gusrded the town at night went on duty.

[Line 36] garden-house a pavilion or summer-house, often of fantastic design.

[Line 48] shambles in this context a slaughter-house or street where animals are butchered.

[Line 51] red-coats British soldiers in the days before khaki was introduced; see the Headnote to“The Drums of the Fore and Aft” and page 357, line 10 of “Wee Willie Winkie”; also Hobson-Jobson, p. 478.

sangar a breastwork or wall of stones picked up on the field to protect a rifleman from enemy fire when it is impossible to dig in.

Usbeg (or ‘Uzbek’) a people of Turkish origin, an important group in the north of Afghanistan, also to be found in various parts of Central Asia, including Uzbekistan. See also Hobson-Jobson (p. 960).

[Line 52] Zukka Kheyl (the spelling varies) a tribe living on the southern frontier of Afghanistan between the Khyber Pass and the Sarghar Range; mentioned in “Lament of the Border Cattle-Thief”, verse 11.

[Line 53] stoned him a form of execution, where stones are hurled at an offender until he (or she) is dead.

[Line 59] Ramazan (or ‘Ramadan’, the spelling varies.) The ninth month of the Islamic calendar and a time of fasting, in which Muslims refrain from eating and drinking from dawn until the sun sets.

[Line 70] matchlocks early firearms that made a characteristic noise when cocked ready for firing.

[Line 76] Balkh to Kandahar see the note to line 4 above.