This poem was published in the Pioneer on 29 September 1888, with the signature ‘R.K.’ and a heading referring across to a dramatic news item in the next column:

Let us get a good-sized gun and fight in earnest … The Portuguese will no doubt refuse to allow [us]* to enter the country, but we must try. Let us wire home and ask the Government to help us thus far, for, if necessary, we must try and smuggle a gun in. What right have the Portuguese to act hand in hand with the Arabs to close up this truly fine country and enslave its tribes? Mr Muir goes … to wire home for a cannon and a Mr Ran goes to Natal to buy a second. May God prosper them in their endeavours!—Vide extract from ‘Daily News’, next column.

*’us’ in the heading but ‘it’ is the reading in the actual extract from the ‘Daily News’.

The poem was reprinted in the Pioneer Mail on 3 October. It was not later collected by Kipling, but is included in Scrapbook 4 of his own press cuttings in the Kipling Papers at the University of Sussex Special Collections.
It is to be found in Rutherford (p. 428) and Pinney (p. 1908).

Andrew Rutherford explains that the ‘Daily News’ item referred to in the heading consisted of a letter from the Revd. Dr Kerr Cross of the Free Church Mission, dated from Livingstonia, Lake Nyasa, East Central Africa, Karonga, on 2 July 1888. (Rutherford dates it incorrectly to 1886) Dr Cross was the surgeon for an expedition led by Frederick Lugard against Arab slavers. 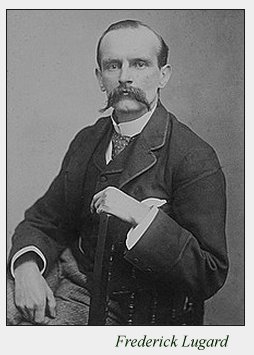 At this time in East Africa, well-armed Arabs conducted an extensive slave-trade, raiding native villages and enslaving the inhabitants, and the Portuguese authorities did little or nothing to suppress it. There had been a night march and dawn attack made by a small force from the African Lakes Company on an Arab village. Lugard’s force had to retire with numerous casualties, the fortifications proving much stronger than expected. In the passage quoted Cross is not making a personal statement but summarising the views expressed in the council of war that followed. [See Margery Perham, Lugard: the Years of Adventure, London, 1956, pp.115-25.]

At this time Lugard, a soldier and explorer who had been born in Madras, was aged thirty. He was in the early stages of a long and distinguished career as an administrator, in which he became Governor of Hong Kong and later of Nigeria.

Britain had a long history of opposition to slavery. Although great fortunes had been made in the Americas in the 18th Century based on slave labour, transported across the Atlantic, an Act of Parliament for the abolition of the slave trade was passed in 1807. To enforce the law British naval squadrons were set up to patrol the coast of West Africa and the Caribbean looking for illegal slavers. Slavery became illegal in British colonies in 1833. There was a a long tradition of slavery on the Indian sub-continent, and it was not effectively abolished in India until 1861.

Kipling’s poem is a prayer to the Lord from Dr Cross asking to be given better weapons to slay the slavers in Karonga. The British had failed to take the fortified Arab stronghold, and small arms were not enough. They needed cannon and ammunition.

In his mischievous take on these events, displaying his knowledge of the technical details of weaponry, and parodying the high-flown tones of the church militant, Kipling contrasts these warlike sentiments with the Christian gospel of love for all men. Rutherford has him accusing Dr Cross of hypocrisy. It seems more likely that Kipling and his readers, many of whom were soldiers, would have relished the irony of the missionary’s moral position, but applauded his bloodthirsty determination. He was, after all, writing as the surgeon of a military expedition rather than an evangelist.

But Kipling clearly felt missionaries were fair game. He published “The Judgement of Dungara” in The Week’s News a few days later. He was equally disrespectful about bishops. See “Liberavi Animam Meam” written a few weeks before.

I climbed a tree Cross established his First Aid Post some distance from the fortification, and while waiting for wounded, he writes:

‘I climbed a tree on my right and had a good view of the whole’.

Ten-grooved rifled, with grooves inside the barrel to cause the shell to rotate. Altered to ‘three-grooved’ in the margin of Scrapbook 4.

case case-shot, bullets fired from a cannon in an iron case which burst on firing, scattering the shot.

the Whore of Babylon the Roman Catholic Church, according to extreme Protestant interpretations of Revelation 17-19 in the New Testament. There were serious conflicts between Protestant and Catholic missions in the early history of East Africa.

Goodwill to men and peace on earth the punch-line of Kipling’s poem. The message of the angels announcing the birth of Jesus. Luke 2.14.