First published with the article “A People at Home” in the Morning Post on March 1908, one of eight “Letters to the Family” on Kipling’s visit to Canada in 1907. ORG No. 912

Jubal and Tubal are half-brothers, who can never agree. Jubal, the musician, is a dreamer, an idealist, singing of adventure and love, and right and wrong, things past and to come. the wonder of the world. Tubal, the smith, is a practical man of action, clearing the land, crossing dangerous waters, fighting enemies, conquering peaks, building towns. There is black enmity between them, the eternal enmity berween the man of dreams and the man of action, so says the poet. Kipling was not, of course, without arrogance over the poet’s role, witness “The Last Rhyme of True Thomas.

The article linked to this poem, “A People at Home” is full of Kipling’s admiration for the active vigorous work of Canadians in developing their splendid country, conquering the North, driving railroads across plains and mountains, coping with the harsh climate, building and making. This is of course all of a piece with Kipling’s own gospel of work, and his belief that ir is the Sons of Martha, the Tubals, who are the driving force behind civilisation. He himself is of course a Jubal, a teller of tales, a singer of songs and guardian of ancestral memories. It is far from clear why in the poem he speaks so uncompromisingly of the hostility between the brothers. He was welcomed very warmly in Canada by men of affairs. (See KJ 317 for March 2006, page 19: “Rudyard Kipling’s 1907 cross-Canada speaking tour”, by Dr Jay Johnson, of Medicine Hat College, Alberta. )

According to the book of Genesis in the Old Testament, Jubal was a musician, the father of those who play the lyre and pipe. He was a descendant of Cain, one of three sons of Lamech the First; see the note on Lamech on Verse 3 below. (Genesis 4:20). 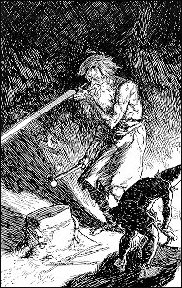 Tubal Cain, his half brother, was a smith, the founder of working in metal. The origin of metalworking is lost in the mists of antiquity, but it is generally true that in ancient societies smiths were often held in awe, as people with magical skill and mysterious knowledge.

See “Weland’s Sword” in Puck of Pook’s Hill, from which this illustration comes, and “The Knife and the Naked Chalk” in Rewards and Fairies..

love that its waves divide perhaps the sea-passage from the U K to India or other parts of the world that separates sweethearts.

hollowed a fallen tree a crucial step in the invention of sailing, as told in Kipling’s speech “The First Sailor” in 1918, to junior naval officers of the East Coast Patrol. Wood is scraped out of the log with fire and flint tools to make a dug-out canoe, the ancestor of all boats.

Nine-point Two a massive breech-loading gun with a calibre of 9.2 inches (23.4 cm.) Commonly knnown as a Nine-rwo.

Lamech a descendant of Cain, the father of Jubal and Tubal. See the 4th. Book of Genesis.

20 And Adah bare Jabal: he was the father of such as dwell in tents, and [of such as have] cattle.

21 And his brother’s name [was] Jubal: he was the father of all such as handle the harp and organ.

22 And Zillah, she also bare Tubalcain, an instructor of every artificer in brass and iron: and the sister of Tubalcain [was]Naamah.

jut something sticking out, protruding

scar a word of many meanings, here a cliff or rock.

snowsheds snow-bridges or avalanche-galleries, tunnel-like constructions to keep snow off a road or railway.Mentioned in “A People at Home”, the article linked ith this poem. Kipling travelled by rail across Canada, by courtesy of the Canadian Pacific Railway, and was mightily impressed by the railway men.