This poem was published in the Pioneer on 18 February 1889, with the heading:

The Maharajah Dhulip Singh has issued a manifesto addressed to the Princes and peoples of India. In it he declares that there are supporters in Europe and America who are ready to form an army for the overthrow of British rule in India; but a fund of four million pounds is necessary for the purchase of munitions in order to carry out that object. Besides the Punjabis, the Irish soldiers soldiers serving in British regiments in India would assist in the movement. Vide Reuter’s telegram in Pioneer of 15th instant.

It was reprinted in the Pioneer Mail on 20 February. It was unsigned and uncollected later by Kipling, but clearly by the same hand as “The Way of Ut”. In any case, Mulvaney was Kipling’s creation, and the Pioneer would not have allowed anyone else to appropriate him. A later handwritten copy, signed ‘Rudyard Kipling’ is in the Strange Library of Africana, in Johannesburg. 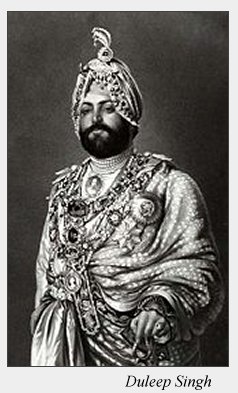 Duleep Singh (1837-93) was the son of Ranjit Singh, the last independent ruler of the Punjab. During his minority the Punjab was annexed by Britain, and in 1854 he came to England where he lived in grand style, on a pension from the British Government, having renounced his claim to the Punjab.

In 1880 he turned against Britain; in 1886 he tried to return to India to place himself as the prophesied head of the Sikh people, but was arrested at Aden. He spent his last six years in Paris on a crusade to return himself to the throne in Lahore.

Aware of the resistance in Parliament to the granting of Home Rule to Ireland, he evidently hoped that Irish soldiers serving in the British Army in India would mutiny in his support. “The Mutiny of the Mavericks” (Life’s Handicap 1891) tells the story of an agent sent by an Irish Republican organisation in America to suborn an Irish regiment. They pretend to be converted for the sake of the beer he can buy, but when war comes they go happily off to fight for England, and he has to go with them, to meet a hero’s death.

The poem is written in the broad Irish brogue that Kipling puts into the mouth of Terence Mulvaney, one of the ‘Soldiers Three’ who first appeared as “The Three Musketeers” published in March 1887. It is very similar in style to “The Way of Ut” published the previous October.

A fellow-Irishman shows Mulvaney a copy of the Pioneer which says that Irish regiments in India would help overthrow British rule. They are unruly here, and in Ireland they have broken some heads in the cause of the Irish Nationalists. What is really going on here? Mulvaney reads the article, and says that the Irish would certainly assist — but only if it meant plundering ‘Mister Julup’ – Duleep Singh. But in the end he gets serious; the man he’d like to meet—and deal with—is the one that spread the lie about the Irish.

Kipling is at pains here to stress the loyalty of the Irish regiments to the British Crown, as he does in “The Mutiny of the Mavericks” . In that story (see Life’s Handicap pp. 223/4) the Irish soldiers express great pride in their regiment’s colours, and its battle honours, stretching back into the 18th Century.

O’Brien William O’Brien (1852-1928), Irish politician, one of the leaders of the Home Rule movement.

Kilmainham A well-known gaol in Dublin.

the Clink Originally a prison in Southwark, London. In the army, slang for cells for delinquent soldiers. cf.“Cells”:

“I’m here in the Clink for a thundering drink and blacking the Corporal’s eye.”

dudeen a clay pipe with a short stem.

Cherat on the North West Frontier, where the Royal Irish Fusiliers were stationed.

Rutherford identifies the insignia of these regiments. He suggests that Kickin’ Harse probably refers to the Kings Royal Irish Hussars, then stationed at Meerut.

The Aigle the Royal Irish Fusiliers wore the emblem of an eagle on their buttons and waist-plates, to commemorate their capture on=f the Eagle of the 8th French Light Infantry at Barossa in the Peninsular War.

the Elephant the Connaught Rangers wore an elephant on their collar-badges, as did the Royal Dublin Fusiliers who combined it with a tiger.

the Harrp three of these regiments had a harp as part of their insignia: the Royal Irish Regiment, the Royal Dublin Fusiliers and the Connaught Rangers.

Maple leaves the Leinster Regiment wore two maple leaves as part of their insignia. Its First Battalion was originally the Royal Canadian Regiment.

Malin Head A promontory on the north coast of Donegal in the north-west of Ireland.