A verse letter to his sister Trix, transcribed by his parents in Notebook 2 (special collections, University of Sussex) dated 28 January 1882. Kipling not infrequently dated letters from his shared study at school as from “The Cuckoo’s Nest”. (Andrew Rutherford p. 113) (See Rutherford pp. 24-28 for details of the Notebooks.)

A jocular letter from school to his sister, with some very far-fetched rhymes: females – three mails, wondrous – under us, Kingsley – things lie, Bristol – missed all.

[line 2] lobster, cream, pilchards and cake a strange mixture: no wonder it heralds abdominal ache. When money was available the boys spent it on food to supplement the school diet. In “Slaves of the Lamp I” (Stalky & Co p. 44), the cast of “Aladdin” enjoy an unlimited ‘brew’:

[line 4] Whose smallness is lesser than beer “small beer” means something of little importance. 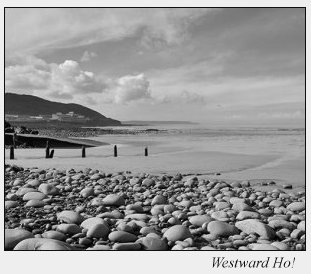 [line 1] Kingsley Memorial College a school for the sons of professional men, opened in 1882 at Westward Ho! quite near the United Services College. It was established partly in consequence of the troubled state of Ireland, where most of its pupils came from (see Verse 7). It had to close down in December 1885.
(Rutherford).

The resort of Westward Ho! itself has a Kingsley connection: it was named from Charles Kingsley’s novel of adventure on the high seas in Elizabethan times (published 1855), much of which is set in the local area.

[line 4] when the Green Isle went wrong Ireland (“the Emerald Isle”) had been racked by agrarian discontent, and on the imprisonment of Charles Stewart Parnell, the leading advocate of Irish Home Rule, in October 1881, the Land League called on tenants to withhold rents until their leaders were released. (Rutherford).

[line 6] Vermouth and Long presumably a steamship company. Rutherford could find no record of it. 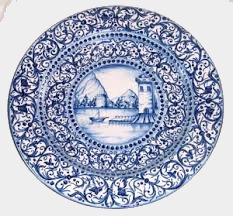 [line 1] delft ware pottery from Delft in the Netherlands, usually blue on a white ground. (left)

[Verse 9] line 2] Miss Winnard: one of the “Ladies of Warwick Gardens” where Kipling spent his school holidays. Kipling describes the household in loving detail in Something of Myself (pp. 21-22).