See Rutherford pp. 24-28 for details of the Notebooks and Sundry Phansies.

The poem was never collected by Kipling, but is to be found in Rutherford p. 113, and Pinney p. 1620

Another poem written to Flo Garrard, with whom the young Kipling had become infatuated in the summer of 1880, when he was fourteen, and she a year older. She was staying at Lorne Lodge in Southsea, and had made friends with his sister ‘Trix’.

Kipling found beaches, where the land meets the sea, haunting and evocative places. See for instance “How the Day Broke”, the first chapter of The Light that Failed, and “Baa Baa Black Sheep”. In this poem, although the setting is unattractive – a place of desolation – it is very dear to the poet as the place of his Passion’s birth. 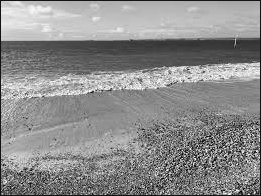 Florence was at Southsea, and when Rudyard visited her there, they must have wandered along the melancholy beach that he later described in the first chapter of The Light That Failed. That beach occurs, quite vividly realised, in “How It Seemed to Us”:

A grey flat lying out against the sea,
Where the start guts are choked with weeded wood
And tangle cordage, moving aimlessly.

[Line 6] Warped the tree has grown crooked in the constant wind.

[Line 7] crisps the … puddles the wind is so cold that the puddles of water are freezing over.

slime masked there should strictly be a hyphen to make a single adjective “slime-masked”. The shallow pools on the beach are covered and hidden by slime.