The poet often sees one of the horses that normally draws the hearse which takes corpses for burial being ridden in the mornings by the undertaker’s children. He muses on death and the loss of friends and wonders if the horse is waiting for him one day, or whether he will outlive the creature, and see it fed to the local fox-hounds.

This macabre little piece, with echoes of “The Raven” by Edgar Allan Poe, (1809-1849), joins the later “A Ballade of Burial”, “Possibilities”, “The Pit that they Digged”, and “The Other Man”, inspired by the fact that death is never far away in the unhealthy climate of India.

In “The City of Dreadful Night” he writes:

The sound of its fall disturbed a hare. She limped from her form and ran across to a disused Mahomedan burial-ground, where the jawless skulls and rough-butted shank-bones, heartlessly exposed by the July rains, glimmered like mother o’ pearl on the rain-channelled soil.

See also Something of Myself Chapter 3, and Gillian Sheehan’s article on “Kipling and Medicine”.

Some of them are imbued with somewhat grim notions, as in “The Undertaler’s Horse”, but are, clearly, designed to go no deeper than verse. 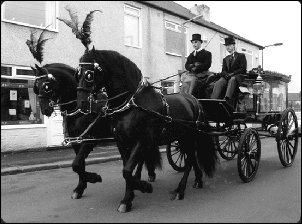 [Title] An Undertaker’s business is to arrange funerals.

At that time the hearse—an ornate black box-bodied carriage with engraved glass sides to take the coffin—would be drawn by black horses with plumes on their heads. See Verse 3.

See also “The Undertakers” in The Second Jungle Book about three creatures who live on corpses.

[Prose Heading] “To-tschin-shu is condemned to death. How can he drink tea with the Executioner?”

The Japanese Embassy in London was unable to identify such a proverb for us. Kipling may well have exercised his fertile imagination to coin this one. From an early age he had been used to making up ‘quotations’, as in the Kipling family parlour-games when the conversation was confined to quotations from Shakespeare.

the pretty daughter she would, in that era, have ridden side-saddle as riding astride was not considered suitable for ladies.

canter a horse’s pace between a trot and a gallop.

shies a horse may ‘shy’—start or give a jump—when startled. This one is placid and well-behaved.

stud-bred born and brought up in a horse-breeding establishment.

lacquered box see the note above on Title.

pith in this context stamina or muscle.

plantain probably the herbaceous plants of the genus Musa which produces fruit similar to the banana.

dâk defined by a footnote as ‘Stage of a journey’. As in dâk bungalow.

crimping a word of many meanings, probably here signifying the elegant plaiting of the tail.

hack A horse hired from a stable, a general-purpose
riding-horse.

marigolds any of several plants of genera Calendula and Tagetes, with yellow or golden flowers; sometimes the only flowers available in India in the hot weather. They appear on the dinner-table in “A Deal in Cotton”, Actions and Reactions, p. 176, line 14.

Carnifex perhaps the Murderous Lion (Thylacoleo carnifex) a highly dangerous and—one assumes—lively beast, that lived in Australia in pleistocene times, now extinct. One doubts whether Kipling’s readers—or indeed Kipling himself—would have known much about it. But the point is clear enough; vigorous life one day, death to follow.

Meredith Dixon writes: I don’t believe Kipling had prehistoric Australian lions in mind. I think the “Carnifex” in question is the horse. The Latin word strictly means corpse-maker; in English, we might say death-dealer. Of course, the horse is not literally a killer, but Kipling has been addressing it as though it were an agent of death; facio the verb from which -fex comes, can mean both ‘to make’ and ‘to do.’ The horse, if not a death-dealer, certainly deals with death. [M.D.]

Susan Treggiari adds: I would add that caro means flesh or meat. (Cf. ‘Incarnation’.) Carnifex is literally a maker of meat. But the primary meaning in actual usage is ‘executioner’. By extension it can be used of a cruel person, a ‘butcher’, or, more generally, to abuse someone as a ‘scoundrel’. I suspect Kipling would have met it in its primary sense in Cicero’s speeches against Verres, the governor of Sicily, whom he accused of unjustly executing citizens. But it is common in classical Latin and Kipling might have known it from Plautus, Livy, or Tacitus, or elsewhere. All the meanings may have been in his mind when he gave this name to the horse. [S.T.]

corse a poetic form of ‘corpse’.