This poem was first published in Echoes by Two Writers in Lahore in August 1884, with the sub-heading (Joaquin Miller). Andrew Rutherford notes that the third stanza was used as a heading to the story “At the End of the Passage” (1890) collected in Life’s Handicap (1891). The poem is listed in ORG as No 110.

The poem tells, in high-flown declamatory language, of the hellish experience of living in the Indian plains in the hot season, baking hot, dusty, oppressive to body and soul. It prompts the need for a man to leap to horse and fly to the calm green mountains, snow-capped and rain-cooled, the Himalayas.

At the Civil and Military Gazette, which Kipling had joined as Assistant Editor in October 1882 at the age of sixteen, he worked on through 1883, learning his trade, with the relief of thirty days leave in Shimla. On his return in August it was still hot and wet and he was sometimes in sole charge of the paper, and alone in his parents’ house while they were away. Some fifty years later in Something of Myself he wrote (p. 41):

I never worked less than ten hours and seldom more than fifteen per diem; and as our paper came out in the evening did not see the midday sun except on Sundays. I had fever too, regular and persistent, to which I added for a while chronic dysentery. Yet I discovered that a man can work with a temperature of 104, even though next day he has to ask the office who wrote the article…. From the modern point of view I suppose the life was not fit for a dog, but my world was filled with boys, but a few years older than I, who lived utterly alone, and died from typhoid mostly at the regulation age of twenty-two.

He wrote in 1890 of four such young men in “At the End of the Passage” one of whom, stressed beyond endurance, dies in terror of his fearful dreams. In using a stanza from this poem to head the story, Kipling was hearking back to his own recollections of the hot season.

In those days before air-conditioning the climate of Lahore was hard to bear for Europeans. From April onwards it becomes steadily hotter, routinely exceeding 40 degress in June. In August and September it is still hot, and there is frequent monsoon rain. Conditions in the Indian “plains”, away from the northern mountains, are similar. In a letter to Edith Macdonald dated 12-13 June 1883, Kipling wrote:

For the heavens are red hot iron and the earth is burning brass,
And the river glares in the sun like a torrent of molten glass,
And the quivering heat haze rises, the pitiless sunlight glows
Till my cart reins blister my fingers as my spectacles blister my nose.
Heat, like a baker’s oven that sweats one down to the bone.
Never such heat, and such health, has your parboiled nephew known. 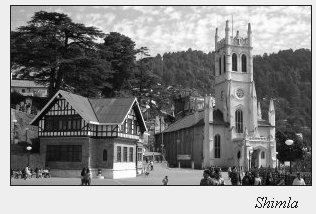 In 1863, the Viceroy of India, John Lawrence, decided to shift the summer capital of the British Raj to Shimla, over 7000 feet (2,200 metres) up in what is now Himachal Pradesh. He moved the administration twice a year between Calcutta and this separate centre over 1,000 miles away, despite the fact that it was difficult to reach. Shimla was also the Headquarters of the Commander-in-Chief of the army, and many Departments of the Government. Meanwhile, despite the hot weather, the work of local administration had to continue down in the plains.

Kipling was sustained by his home life with his parents, though there were times when they were away, and – from December 1883 – by happy collaboration with his young sister ‘Trix’, with whom he played word games and other literary inventions, and wrote parodies. Several of these, including this poem, were published in Echoes by Two Writers.

For Kipling’s writing on the Himalayas, see also “The Miracle of Purun Baghat”, the final chapters of Kim, and “Collar-Wallah and the Poison Stick” 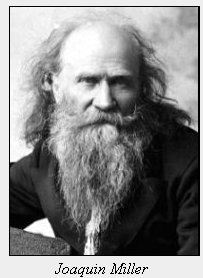 Joaquin Miller (1837-1913), was an American poet and frontiersman, with a colourful background as mining-camp cook, horse thief, and journalist.

In 1870 he went to England, where he published “Songs of the Sierras”. It was well received by the British press and members of the Pre-Raphaelite Brotherhood, particularly Dante Gabriel Rossetti and William Michael Rossetti. but less highly regarded in America. In 1882 the schoolboy Kipling had clearly read Miller with enthusiasm, as he recalls in Something of Myself (p. 37):

There came a day when he (the Head) told me that a fortnight after the close of the summer holidays of ’82, I would go to India to work on a paper in Lahore, where my parents lived, and would get one hundred silver rupees a month! At term-end he most unjustly devised a prize poem—subject ‘The Battle of Assaye‘, which, there being no competitor, I won in what I conceived was the metre of my latest ‘infection’—Joaquin Miller. And when I took the prize-book, Trevelyan’s Competition Wallah, Crom Price said that if I went on I might be heard of again.

Another American “infection” from which he suffered during his days at Westward Ho! was Joaquin Miller, who, like Whitman, was a hero in English literary circles during the seventies. He appears to have made no permanent impression upon Kipling, and the only concrete evidences … are the United Services College prize poem “The Battel of Assye,” and a parody in Echoes ,,, “Himalayan” seems to have caught Miller’s cadences, but neither attempt possesses much distinction.

Simla, Murree, or Naini Tal ‘Hill stations’ in the northern mountains, popular in the hot weather. Simla is now spelt Shimla, and was the summer capital of British India. It is the scene of many of Kipling’s poems and tales.

solah topee A pith helmet, believed to be essential protection against the sun.