An inscription handwritten by Kipling in a copy of Wee Willie Winkie and Other Child Stories presented to Mrs. Edmonia Hill in March 1889. Published in her article “The Young Kipling” in Atlantic Monthly, Vol. clvii for April 1936. This is collected in Harold Orel Vol I, p. 95).

Kipling and the Hills were on the SS Madura on the first stage of their voyage to San Francisco, having sailed from Calcutta on 9 March 1889. Kipling is just relaxing after the end of his ‘Seven years’ hard’ as a journalist and only wants to eat and sleep and drink, but for Mrs. Hill he will make an effort. (Tivoli is a brand of beer.)

A draft in Cornell University Library has some preliminary lines on her request for an inscription:

As idle as a bard may be
I drift across a lazy sea
And wrap each India sundered sense
In triple web of Indolence
And roll a sleep be-sodden eye
Between the ocean and the sky.
But you demand a verse to end
The last of six small books I penned
A servant of the Pioneer
A month ago at Belvidere.
What shall I write?They lie who say
I set my foot in India …
Behold the sixth small book of mine
That ends the silly series
But ask me not for rhymed line
I only drink and sleep and dine.

‘Belvedere’ was the Hills’ house in Allahabad. See also “To These People” for Kipling’s friendship with the Hills. 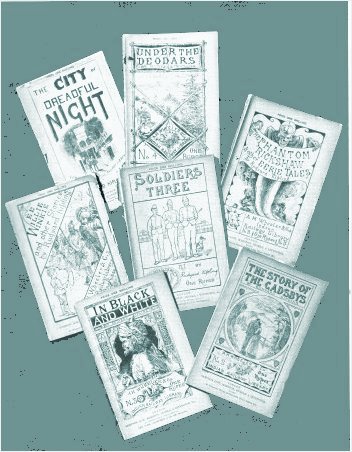 The six small books were the six volumes of Kipling’s stories published in the Indian Railway Library series in 1888-9: Soldiers Three, The Story of the Gadsbys, In Black and White, Under the Deodars, The Phantom Rickshaw

and Wee Willie Winkie. This picture also shows a seventh volume The City of Dreadful Night about Calcutta (no. 14), which Kipling withdrew.
Andrew Lycett writes (p. 164) of Kipling’s determination in 1888 to take his work to a wider public:

Rudyard also worked to ensure that the stories he had written over the past year or so were gathered in book form. Hoping for the widest possible dissemination, he entrusted the job not to the stuffy Calcutta publisher Thacker Spink, but to A. H. Wheeler & Co., a local Allahabad firm, which had the monopoly on bookstall sales on Indian railway stations.

Rudyard licensed Wheeler’s enterprising senior partner, Emile Moreau, to publish his stories in cheap booklet form, with covers in grey-green card, illustrated by his own father. Starting in the autumn, the six volumes of the Indian Railway Library began to appear, priced at just one rupee, and soon they were being read not only on trains but in drawing-rooms throughout the world.

After Kipling got back to England, the first three were collected as Soldiers Three and Other Stories and the second three as Wee Willie Winkie and Other Stories, and are to be found thus in the many subsequent editions published by Macmillan, who became the publishers of choice in the United Kingdom for his stories